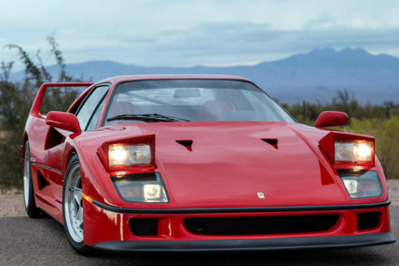 Bonhams auctions are a staple of any automotive event, and its no different in Scottsdale. This year’s docket is small, but each consignment has been held to the highest of standards. Not one of the 111 Lots would blush on a concours green. Among the cream of the crop are four million-dollar Ferraris, including 275 GTB/4 and an impossibly low-mileage F40.

As always, our Team of leasing experts will be watching the bidding closely to see where the collector car market is heading in the new year.  Here are some of the cars they’re most interested in.

Nicknamed the “Giant Killer,” Lot 44‘s 1958 Porsche 550 Spyder was a force to be reckoned with, in spite of its diminutive 4-cylinder engine. In order to qualify for international sports car races like the Mille Miglia, the 550 has a full passenger seat, lights, and weather protection. Though it has the room, don’t expect a ride from whoever’s lucky enough to win it; West Coast Sales Manager Juan Garcia already called shotgun.

Premier’s Southeast Sales Manager, Chris Warren, has his eye on the 2016 Porsche 911 R at Lot 52. With a normally-aspirated flat 6 and a manual transmission, the 911 R was a gift to the purists. But this Porsche is more than a party trick – it’s an even lighter version of the blazing GT3 RS. The 911 R suffered from massive price inflation due to high demand and low production, so a pristine example like this one, with only 38 miles, should help establish a firm value.

The 2005 Porsche Carrera GT at Lot 81 has caught the attention of Kyle Lane, Premier’s Midwest Sales Manager. In the same vein as the 959, the Carrera GT was a halo car for Porsche, combining Le Mans technology with a luxurious interior. With a 612 bhp V10 and no stability control, the Carrera GT has a reputation for being unforgiving.

As a preeminent Porsche fan, Northeast Sales Manager Keith Neelans can’t pass up the 1956 Porsche 356a at Lot 32. Originally built as a stripped-down, entry-level model, Speedsters were embraced by the racing community and now fetch more than their fully equipped siblings.  This particular example is among the best, benefiting from a complete restoration and a pearly coat of Aquamarine Blue.

Premier’s corporate headquarters in Woodbury, Connecticut is buzzing about Lot 85‘s De Tomaso Mangusta. Coyly named after a Cobra-killing mammal, the Mangusta followed the same equation as Shelby’s legendary racer; V8 American muscle underneath handsome European coachwork made the De Tomaso stand out on the track and on the street.

Don’t let the car of your dreams slip through your fingers, call Premier today to get pre-approved to lease a car from Bonhams.  Be sure to consult your auction basics before you bid and remember, whether it’s a new Ferrari, a Jaguar race car, or a classic Tesla, Premier can cater a lease to your driving needs.