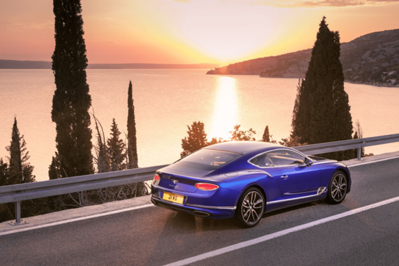 An Even Grander Grand Tourer.

For Bentley buffs, the news from the continent is indeed good. Just a few months from the calendar turning to 2018, Bentley has unveiled the 2019 Continental GT. The company says the goal for the new car was nothing less than the best grand touring car in the world. (Does anybody in this realm ever try for second best?)

The 2019 Bentley Continental GT, which arrives next year, will be faster, lighter, more luxurious and more advanced than the car it replaces. (But you knew that.) The look is certainly familiar, closely resembling the previous GT models introduced. The design link is deliberate, of course. Bentley designers created a form that successfully marries modernity with heritage, so why mess with that?

The new Continental is a half-inch wider than before, but with an identical length to the outgoing version. Bentley stretched the wheelbase by 4.1 inches, all of it apparently between the front wheels and windshield. The net result improves weight distribution.

Speaking of weight, there’s about 250 pounds less of it than before, but 5,000 pounds is still hefty for a car made using plenty of aluminum. Count on the magic of Porsche-derived suspension to make this heavyweight drive like a much lighter car, since the 2019 Continental GT’s basic architecture comes from its VW Group cousin, the Porsche Panamera.

Under that long hood resides the latest iteration of Bentley’s unique and compact W-12 engine, producing 626 horsepower and a massive 664 lb-ft of torque, the latter at just 1,350 rpm. And, good news for skinflints, the new engine is said to be 16 percent more efficient than the previous version.

There’s plenty of newness connected to the W-12, including an eight-speed dual-clutch automatic to replace the previous eight-speed torque-converter transmission. That means quicker shifts and even launch control, the latter to ensure you can replicate the factory’s claimed zero-to-60-mph time of 3.6 seconds.

The all-wheel drive system is new as well, now directing all torque to the rear wheels most of the time. The system can send up to 38 percent of available torque to the front wheels if slippage is detected at the rear. Bentley’s Dynamic Ride system can use the AWD to also ensure poise through corners.

As mentioned, the chassis tech shares much with the Porsche Panamera, including air suspension, adaptive dampers and active anti-roll bars. Bentley calls the setup “Bentley Dynamic Ride.” The electronic trickery is constantly adjusting

One may choose from among four driving modes, including Comfort, Sport, Custom, and Bentley, the last designated by a stylized “B” on the console knob. Choose “B” to enjoy what Bentley engineers feel is the best combination of ride and handling characteristics. You may feel a twinge of guilt for selecting any other mode.

The usual Bentley luxury is well represented with ultra-soft leather and a choice of eight wood veneers. Additionally, it is the same metal finish used for high-end watches. Bentley says it made the new Continental GT even quieter inside. That is the better to enjoy either the standard 650-watt, 10-speaker audio system or the mind-blowing optional Naim 2,200-watt, 18-speaker system.

By far the coolest interior feature has to be the optional Bentley Rotating Display. It’s the big infotainment and navigation screen when you need it, or touch a button and it rotates to another panel with an analog compass, a timer, and an outside-air-temperature gauge. Touch the button again, and the assembly rotates to a expose a wood veneer panel matching perfectly with the dash trim.

Bentley is also stepping up its safety tech, giving the 2019 Continental GT a wide range of driver-assist features. This includes semi-autonomous steering capability. We can’t imagine anyone wanting to let a computerized invisible driver take over in this car, however.