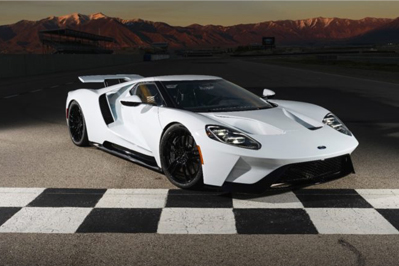 Ford’s GT is on the Road.

One thousand. That’s the number of GTs Ford will build over the next four years. Customers have begun taking delivery of Ford’s new supercar, 2017 Ford GT, but if you’re not on the list, you’ll have to wait for the secondary market. And don’t expect discounts from the 2017 GT’s $453,750 MSRP. (Feel free to build one in the Ford website configurator anyway.)

One of the most anticipated enthusiast cars in recent history, the Ford GT is, in fact, not really so much a gran turismo as a road-legal track car. There’s nothing grand touring-ish about it, other than its racing variant competes in GT racing. Oh, and it happened to win the GTE class at the 2016 24 Hours of Le Mans, a fitting way to mark the 50th anniversary of Ford taking a 1-2-3 overall victory with the original GT40 a half-century before. (A Ferrari 488 spoiled the 1-2-3 this time.) The Chip Ganassi GTLM victory in the Rolex 24 at Daytona this past January only thickened the racing pedigree.

And now, the Ford GT is hitting the road. 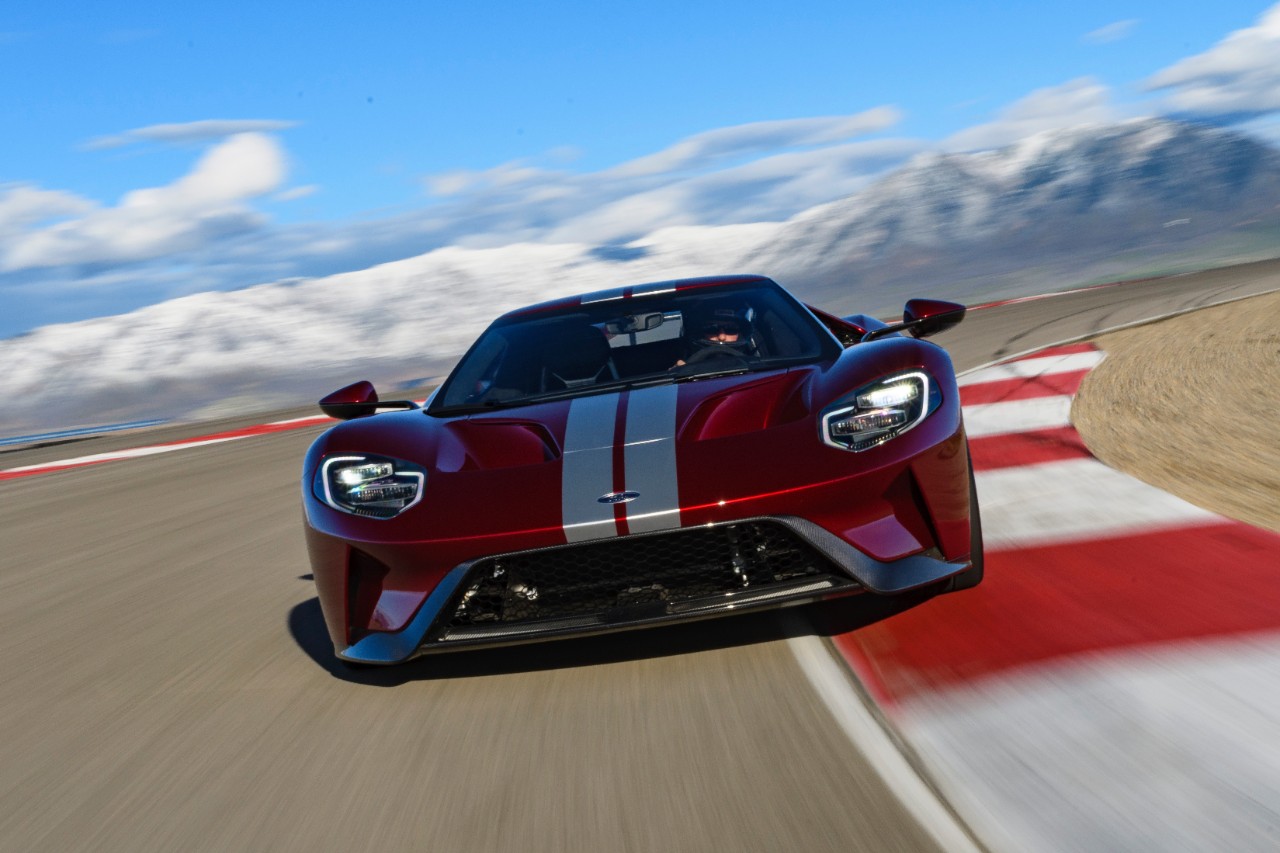 Media driving impressions of the Ford GT confirm that Ford was not aiming for the Ferrari 488 GTB. Porsche’s Carrera GT from a decade ago might be a closer analogy. That’s going to be just fine with Ford GT owners, who undoubtedly have other vehicles to keep them comfortable.

The 2003-2005 Ford GT was a pure road car, a successor to the Le Mans-winning GT-40 models in style and format only. A stunning looker and a stunning performer, its original list price of about $150,000 made it a relative bargain in the supercar realm. The 2017 Ford GT is a different animal. Its design certainly recalls some of the classic GT40 theme, but this car has been aero-tuned to the nth degree for maximum track performance. 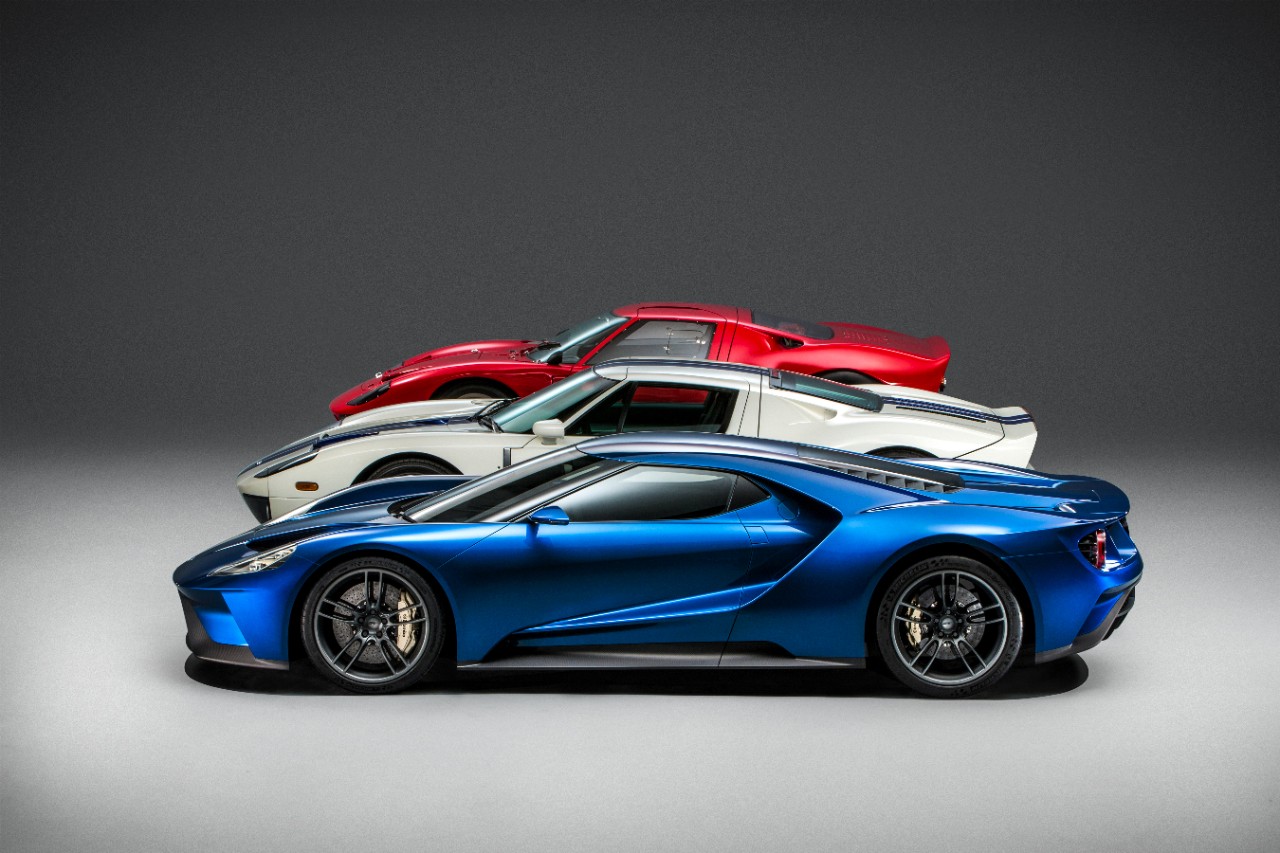 Not Your Everyday Sports Car

There’s little about the 2017 Ford GT to suggest any attempt to make it an everyday sports car, unless of course you drive on a track every day. The first thing that surprised road testers at a Ford media event at the Utah Motorsports Campus was what happened when they dialed up Track mode using the thumbwheel on the steering wheel: the GT instantly drops a couple of inches on its suspension thanks to hydraulic actuators on the coil springs.

Ingress/egress may be a challenge for some, requiring a kind of contorting to get past the carbon-fiber central tub’s wide sills. Car & Driver cautions to avoid banging your head on the FIA-spec rollcage hidden under the headliner. You’ll land in a narrow racing seat, where finding a comfortable position depends more on the adjustable steering column and pedals than the skimpy reclining range. 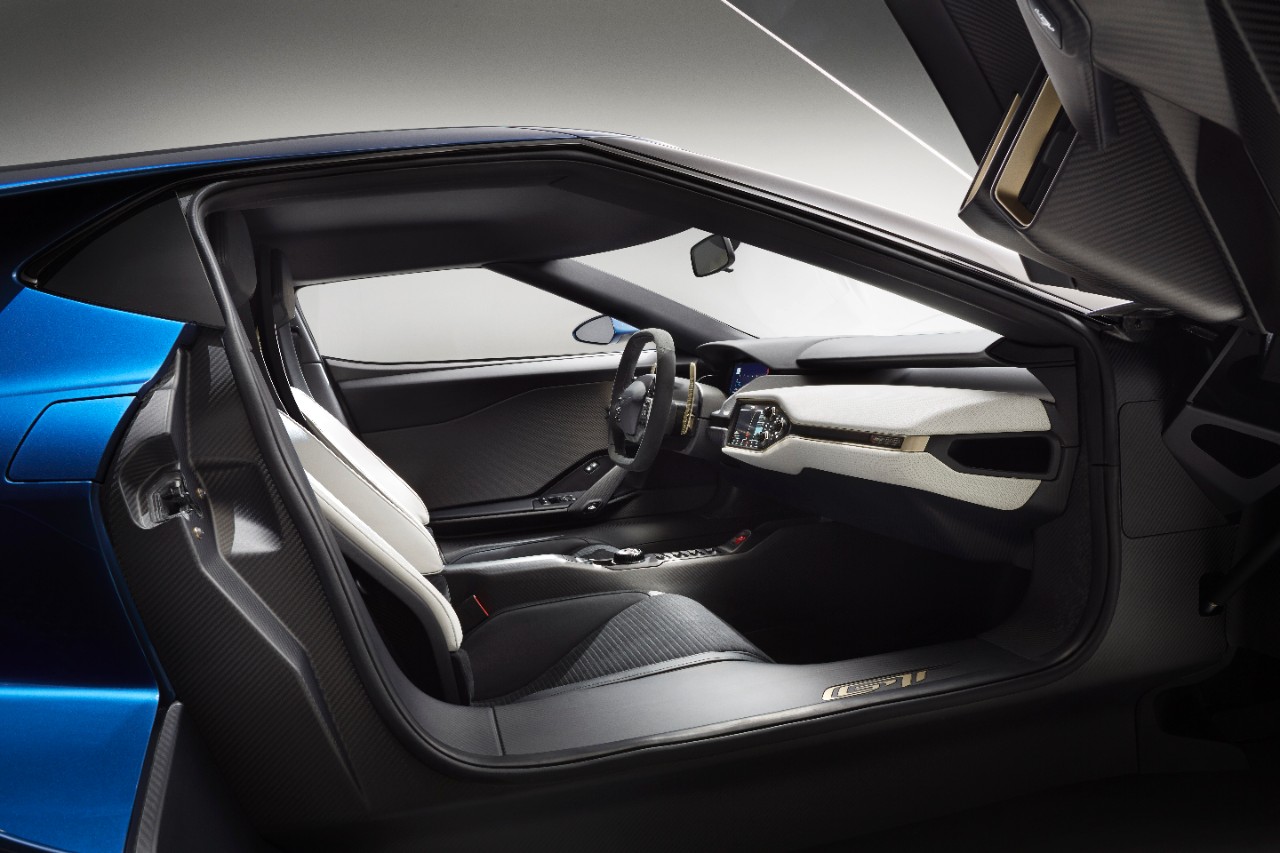 A data-rich digital instrument panel and an F1-inspired steering wheel confirm that there is no retro in the 2017 Ford GT. Where the previous Ford GTs were V8-powered, the new car gets a 647-horsepower 3.5-liter EcoBoost twin-turbo V6. Like Ferrari, the Ford GT comes exclusively with a 7-speed dual-clutch transmission – a manual trans would only hold it back.

The aluminum and carbon fiber GT weighs about 3,250 pounds, so acceleration is quite rapid. “At an elevation of more than 4,300 feet, we’re probably not making all 647 ponies, but the quoted sub 3-second sprint to 60 feels right,” said Autoblog. Top speed is 216 mph. 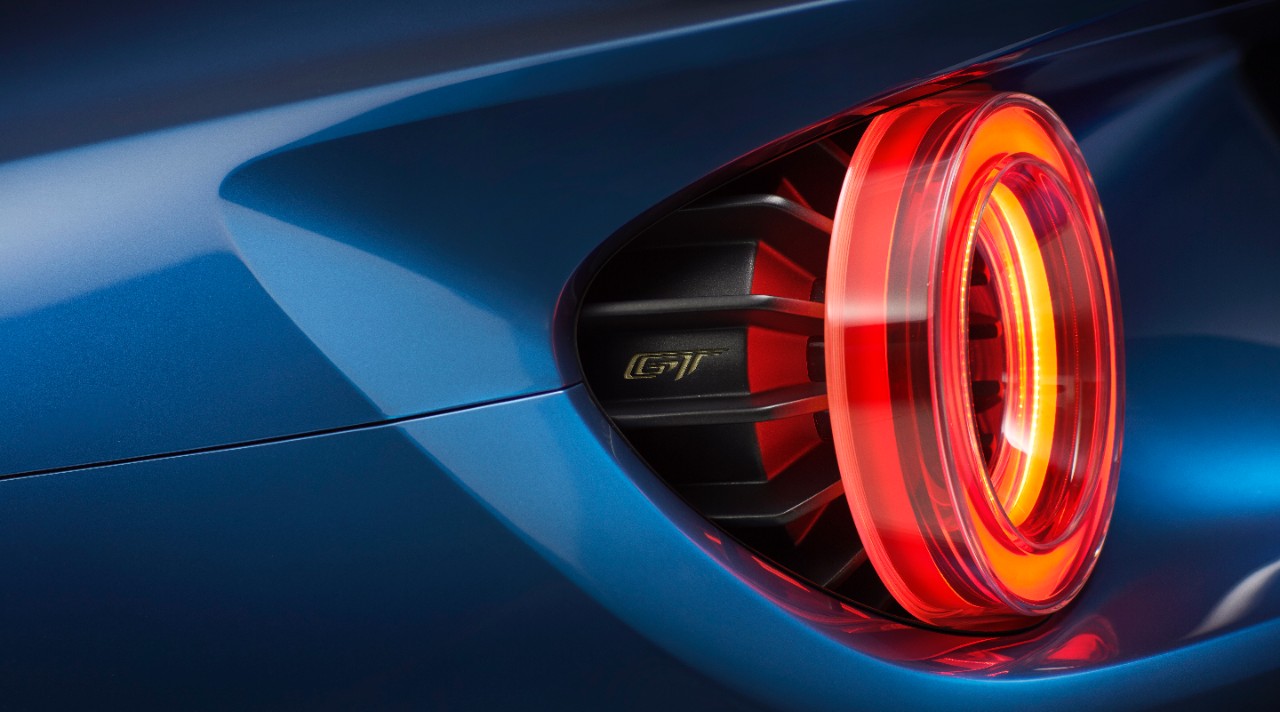 The driver chooses from among five driving modes: Wet, Normal, Sport, Track, and V-Max, the last for straight-line track speed. Track prowess has been praised. Said Car & Driver’s Aaron Robinson: “The grip is obviously tremendous and the ride not quite the body slam I was expecting. The GT swallows curbs and camber changes with sang-froid, the roll and body motions minimized but not choppy.”

The V6 engine’s sound was praised, but not its noise level on the road. “Without helmets to muffle the noise, the GT’s cabin is downright loud, the exhaust in certain gears at certain throttle positions turning painfully boomy,” said Car & Driver. The magazine had no complaints about handling on the road, saying, “The GT loves an undulating road as much as a track. The driver feels plugged into the Ford through the quick steering and the wide pedals, and placement of the nose is easy as it flows contentedly from bend to hairpin to sweeper. Ferrari drivers, spoiled by perfect steering, will not complain.”

Car & Driver’s a final verdict was not unlike those automotive media have rendered about the world’s great supercars for decades:

“You’ll bash your head, pull a muscle, and possibly lose your hearing, but do you even care?” 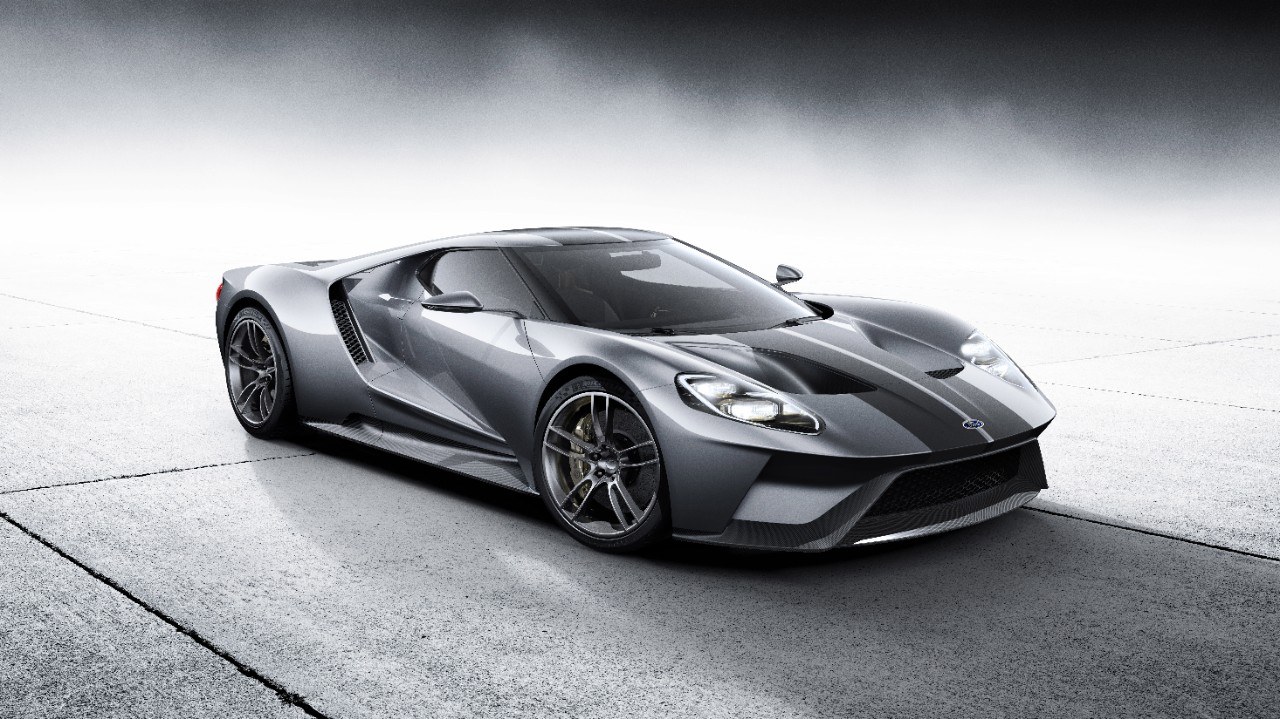