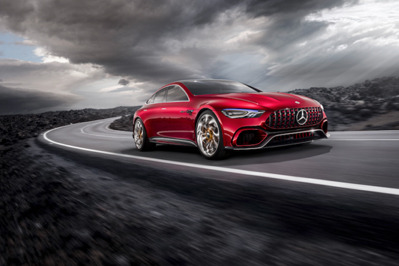 Most car enthusiasts see through the veil of the “concept car” label put on what they know to be lightly disguised pre-production models. Carmakers introduce these vehicles to of course create pre-production buzz. It’s always appreciated when the intro comes with a dose of honesty, as the Mercedes-AMG GT Concept did when revealed at the Geneva Auto Show this past March: there is production intent for this stunning four-door hybrid.

The AMG GT series has been growing, with new, more powerful GT C models introduced, as well as the track-ready GT R. Now, Mercedes is ready to stretch the GT definition beyond the traditional two-door, two-seat configuration. The AMG GT Concept is a full four-door, a potential Porsche Panamera competitor, namely the Panamera E-Hybrid. That’s right, the Mercedes-AMG GT Concept is a hybrid, one with 805 horsepower. 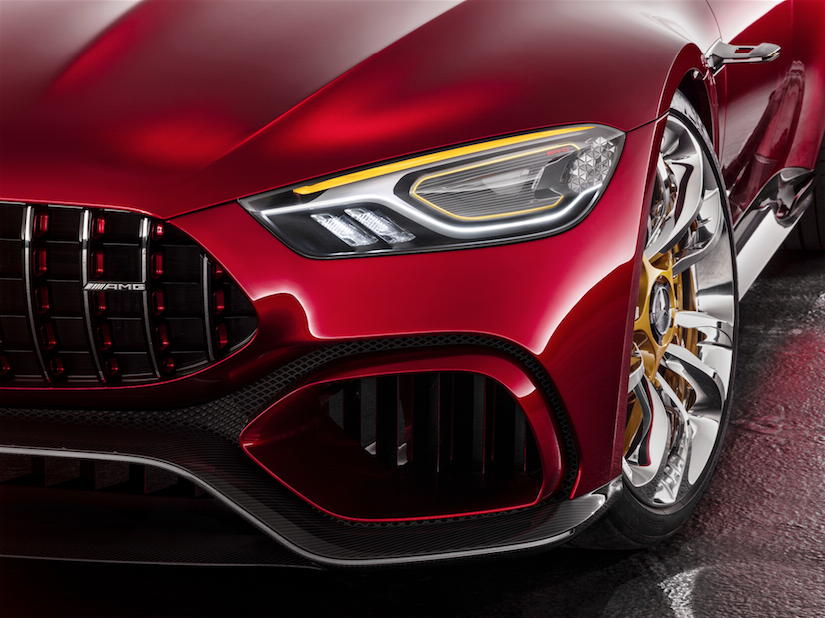 Stretching the GT, Literally and Figuratively

Premium carmakers have proven they can make sedans, wagons and SUVs handle as well as coupes, so the performance element of a GT is no longer tied to the number of doors. The Mercedes-AMG GT Concept also shows that designers can deftly endow a four-door sedan with a coupe-like silhouette, with the promise of a roomy rear seat for two. Who knows? The two-door style may soon be in the minority among coupes.

Leave it to Mercedes-AMG to also deftly work in the carmaker’s heritage design cues. The “Panamericana” grille is a new addition to the 2017 AMG GT models, and also featured on the AMG GT Concept. The basic theme was inspired by the simple grille on the 1952 Mercedes W194 racecar, the 300 SL Gullwing’s progenitor that won both the 1952 24 Hours of Le Mans and La Carrera Panamericana road race through Mexico – hence the grille’s name. The “power domes” on the long hood also trace their roots to the Gullwing. 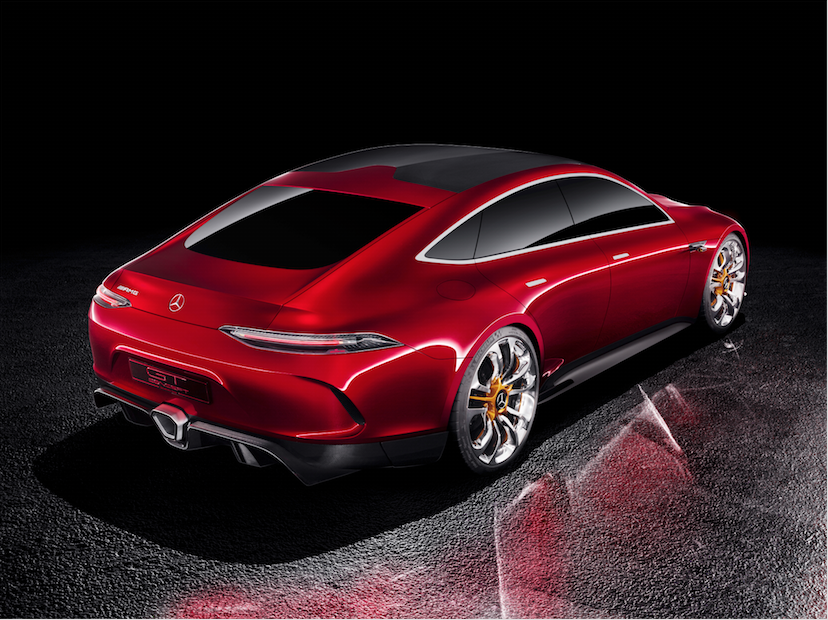 AMG developed its own hybrid powertrain for the GT Concept, and you should expect to see this appear in future AMG GT models. Called EQ Power+, it combines the output of the AMG 4.0-liter biturbo V8 engine with an electric motor and lithium-ion battery pack. Power flows through the 7-speed AMG SPEEDSHIFT® DCT transaxle and into AMG performance 4MATIC+ all-wheel drive. 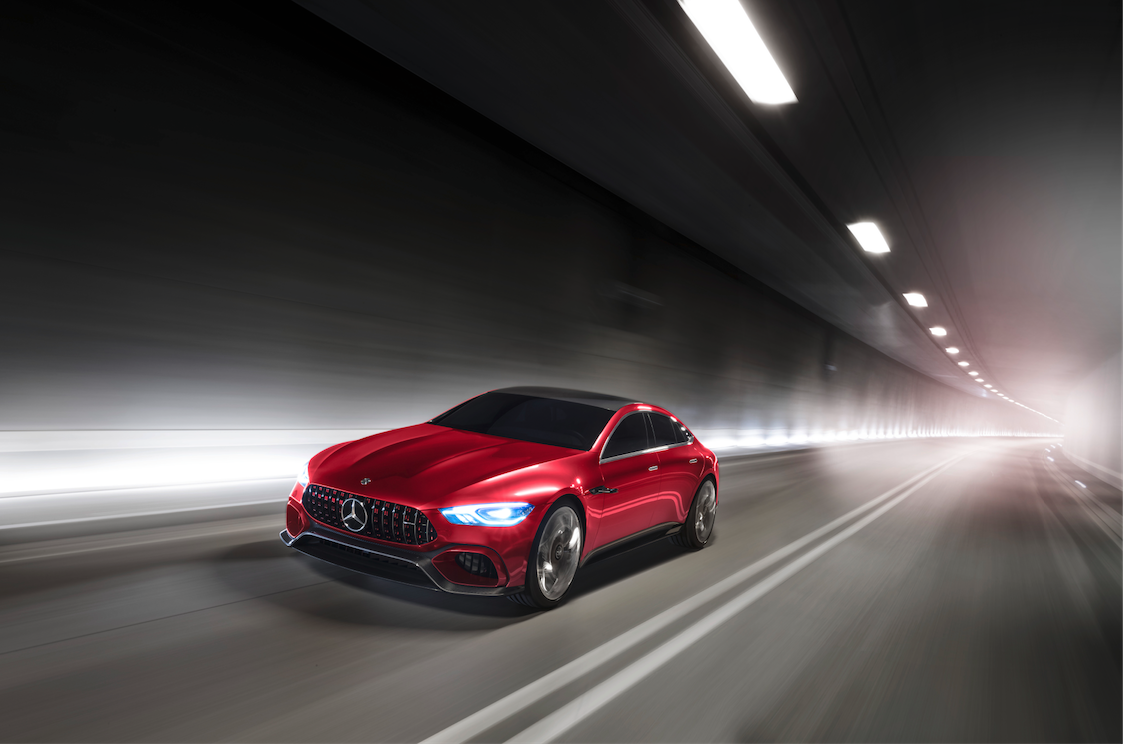 The 4MATIC+ system includes an electric motor at the rear wheels on the GT Concept, which kicks in like a fighter jet’s afterburner to boost acceleration. AMG says this car would be capable of 0-60 in under three seconds.

The EQ Power+ powertrain offers three driving modes: electric, gas or hybrid combining both. AMG points out that, like the MERCEDES PETRONAS AMG Formula 1 racing car, the battery charges while the vehicle is driven. The idea is to have as much battery capacity available as possible for maximum acceleration when the driver wants it.

Of the electric only driving range, AMG has thus far only called it “impressive.” AMG has already stated that the EQ Power+ badge will identify all its future hybrids (yes, plural). 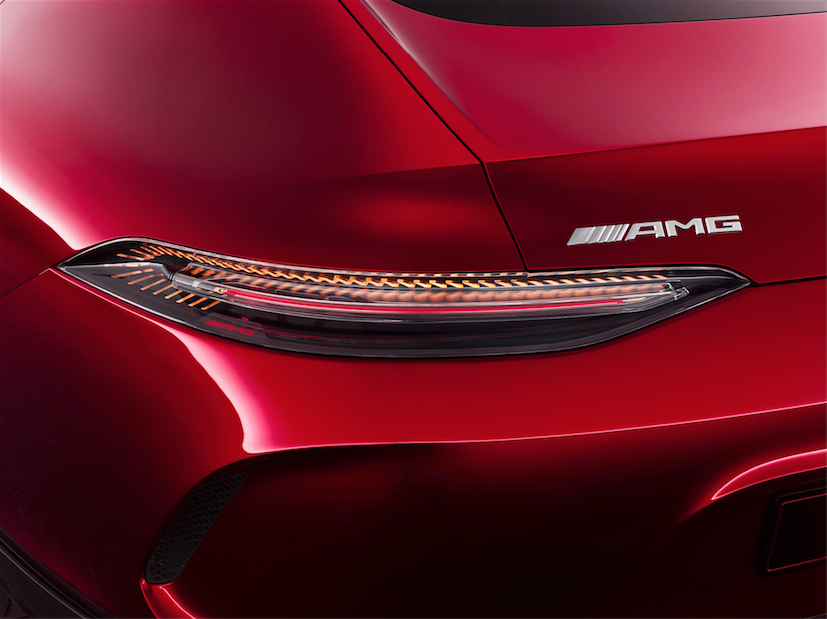 As in the two-door AMG GT models, the gasoline engine sits behind the front axle line in the GT Concept and connects to the rear-mounted transaxle via aluminum torque tube, ensuring 47:53 weight distribution.

In the 1950s, a GT offered luggage space for two for at least a weekend. The AMG GT Concept’s fastback roofline cleverly hides a tailgate to access a luggage compartment that should offer considerably more room than that. You can’t take on the Porsche Panamera with a Miata-sized trunk, after all.

Perhaps some of the AMG GT Concept’s hardware will remain “concept,” unless regulations change. Specifically, the car does away with side mirrors in favor of miniature cameras. The designers also had some fun with the, daytime running lights, using “nano active fiber” technology to create a three-dimensional effect.