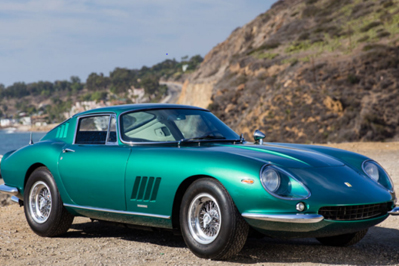 The last of the three top-tier auction in Scottsdale, Gooding & Company’s well-curated docket will ensure the week ends on a high note. The highlight of this year’s auction is what Gooding calls its “Ultimate Sports Car Wish List,” including a Ferrari 275 GTB/4 and Shelby 289 Cobra. All four cars on Gooding’s list are landmark designs carrying pre-auction estimates that range into seven figures. Premier’s team of leasing experts will be watching the bidding closely to gauge the health of the collector market.  Here are a few of their favorites that are set to cross the block.

Having formerly worked for Bentley, our West Coast Sales Manager Juan Garcia, has a soft spot for the classic 1936 Bentley 4 ¼ Liter at Lot 28. Sweeping fenders and a raked windshield give this beautifully engineered tourer a decidedly sporty air.  Its coachwork, crafted by Antem of Paris, is unique and has survived with the car for over 80 years. Rarely do you find a Bentley of this quality in its original form.

Keith Neelans, Premier’s Northeast Sales Manager, is watching the 1964 Aston Martin DB5 at Lot 26. Owing to appearances in six James Bond films, the DB5 is one of the most iconic vehicles ever produced by Aston Martin and certainly deserves its place on Gooding & Comapny’s Sports Car Wish List. Beyond its movie-star status, this example is generously appointed with Connolly leather, a limited-slip differential, and adjustable suspension.

Premier’s Southeast Sales Manager, Chris Warren, has his eye on the 1973 Ferrari Dino 246 GTS at Lot 32. Originally sold under the Dino marque, these Pininfarina-designed V6 sports cars now rightfully carry the prestige of Ferrari‘s prancing horse. This particular Dino has only 16,000 miles on the odometer and features desirable options like factory air conditioning and Daytona-style leather seats.

The final car on Gooding’s “Ultimate Sports Car Wish List,” a 1955 Mercedes-Benz 300 SL located at Lot 18, has caught the attention of Southwest Sales Manager Michelle Yancey. Revolutionary features like a fuel-injected straight six and all-independent suspension made the Gullwing the fastest production car in the world. As an all-original, unrestored time capsule, this red Mercedes-Benz is among the most collectible cars ever to cross the auction block.

The angular, light blue Lancia at Lot 55 has quickly become a favorite at Premier’s corporate office in Woodbury, Connecticut.  This Lancia Stratos HF Stradale is one of only 250 road-going versions of the rally car that dominated the field in the mid ‘70s. Beneath the striking, Bertone-designed body is quite literally a racecar; it has almost no creature comforts -beyond a pocket in the door for your racing helmet- and features only a slightly detuned Ferrari-sourced V6 for better day-to-day reliability.

Whether you’re looking for a pre-war Bentley cabriolet or Sean Connery’s favorite Aston Martin, Gooding & Comapny’s Scottsdale auction has something for everyone.  Contact Premier today, if you’re thinking of bidding, to see how getting pre-approved for our Simple Lease can benefit you at auction.