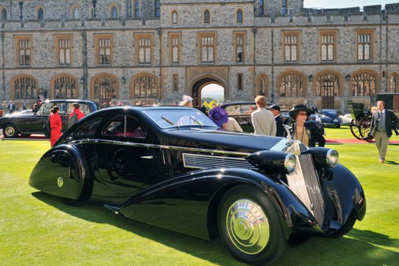 The United Kingdom’s Concours of Elegance

A Font of Fancy

The Concours of Elegance is an international competition that celebrates the best of automotive art and engineering. But it’s more than just a concours; it’s a two day motoring experience that features a vintage rally, car show, and awards ceremony. With special permission from the Queen herself, the Concours of Elegance sprawls out over the lawns of Windsor Castle, the historic home of the English Monarchy. The dress code is, predictably, formal.

Only 60 cars are part of the official concours, making this event one of the most exclusive and prestigious in the world. Best of Show is determined not by a panel of judges, but rather by the owners themselves – many of whom are marque experts. And no, you can’t vote for your own car. Prior to the event, many of the concours entrants will participate in The Highland Tour. The tour is a two-day rally through Scotland’s craggy heaths.

The field of automobiles maintains a garden party atmosphere at its center, where owners and spectators enjoy the manicured grounds punctuated with motorized royalty. Like all car events of this caliber, The Concours of Elegance offers exotic car manufacturers an audience of staunch enthusiasts to display their latest creations.

Hundreds of collector cars bolster the 60 entrants, cars that may not have the credentials for the Concours of Elegance but make up for it with character and variety. This supporting car show includes some of the most distinguished car clubs in the UK. Additionally, each features 40 of their finest automobiles to vie for the Club Trophy.

These cars exude the power and elegance epitomized by British marques like Jaguar, Rolls-Royce, Aston Martin, and Bentley. Bentley owners, in particular, enjoy the spotlight this year with the addition of the Bentley Trophy. 90 Crewe natives, from dogged W.O. era Bentleys like the Speed Six to the latest Continental GTs, are expected to be judged by a panel of experts.