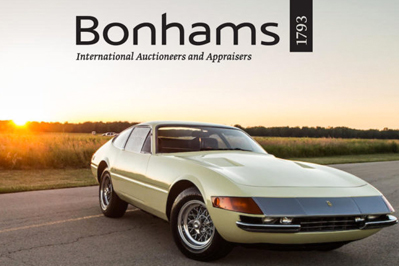 Bonhams’ Monterey auction is partnered with The Quail: A Motorsports Gathering, and upholds the latter’s reputation for the displaying some of the finest vehicles extant.  Out of their docket of over 100 vintage and exotic automobiles, at least 12 have a low estimate exceeding one million dollars.  Those that may not boast the high price tag are well-regarded for their historical import. For example, a Renault R5 Turbo and Aston Martin Lagonda. Our team of leasing experts will be in attendance to assist our clients and keep an eye on the bidding. Here are a few of the cars they’re most excited about.

Premier’s West Coast Sales Manager, Juan Garcia, has his eye on the 1985 Ferrari 288 GTO at Lot 77. The first car to carry the GTO badge since the 250 GTO, this suped-up 308 had big shoes to fill.  And fill them it did – its V8 was twin-turbocharged to produce 400 bhp and 366lb/ft of torque. Its light composite body, turbocharger, and bare-bones performance setup provided the framework for the famous Ferrari F40. The 288 GTO made amends for the 308/328 body-style that, though beautiful, was tragically underpowered.

Southwest Sales Manager Michelle Yancey has chosen what is, by many metrics, the fastest supercar in the world – the 2014 McLaren P1.  Located at Lot 24, this successor to the world-beating F1 features a twin-turbocharged V8 coupled with a powerful electric motor. A hybrid precedent that would be immediately followed by the Porsche 918 Spyder and Ferrari LaFerrari. The P1 has a far more traditional (and comfortable) seating layout than its predecessor, which featured a centered driver’s seat with a small passenger seat flanking it on either side.

The Ferrari red Ferrari La Ferrari at Lot 95 is a favorite of Southeast Sales Manager Chris Warren for more than its repetitive nameplate. Though beaten to the punch by the aforementioned McLaren, the LaFerrari made up for it with comparable speed, gorgeous Italian styling, and a screaming V12.  Like the McLaren P1 and Porsche 918, the LaFerrari makes use of hybrid technology to reduce emissions. Additionally, it vastly improves torque at low rpm.  Instead of turning to Pininfarina for the styling, as they have with most of their cars, Ferrari penned this striking, aerodynamic form in-house.

Keith Neelans, Premier’s Porsche-loving Northeast Sales Manager, is a fan of the 1994 Porsche 911 Turbo S at Lot 70. The Flachbau (or flat-nose) package included a host of improvements besides the angular bow, like larger brakes, advanced A/C, and a 60% increase to the already high list price of the Turbo S. Additionally, the sleeker nose made for improved aerodynamics and a rakish look. Further, it necessitated popup headlights like those on the 928. Only 76 Flachbau 911s of the 964 model designation were made.

Our corporate headquarters in Woodbury, Connecticut is buzzing about the 2008 Lamborghini Reventon on offer at Lot 60. Like the most recent Centenario, the Reventon was an ultra low-production supercar put out by Lamborghini for a few select customers.  Because only 20 were made, it was sold out before most people even heard the name. These 650bhp V12 coupes are rarely spotted, let alone offered at a public auction.

If you’re lucky to find yourself among the bidders at Bonhams’ Quail Auction, it would be a shame not to drive out in a new Ferrari supercar or Rolls-Royce limousine. Call Premier today to get pre-approved to lease from auction. It can help make that dream a reality by turning a massive outlay of cash into a savvy investment.  If you’re bidding, be sure to brush up with Auctions 101 to make sure your favorite motor doesn’t slip through your fingers.