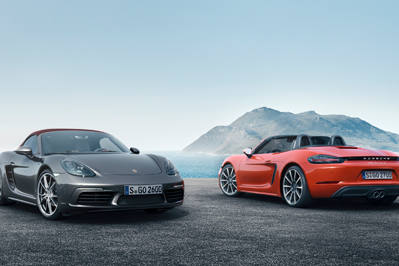 Beneath the classic badge, a new-wave powertrain.

Naming a road car for a classic racecar would, for some marques, be a risky proposition. You probably won’t find too many objections, however, to Porsche’s putting the “718” badge on its redesigned Boxster and Cayman models.

Even if Porsche does not race those mid-engine cars, both models can claim a legitimate lineage to the 718 Spyders of the late 1950s and early 1960s. Successors to the 550 Spyder, the 718s successfully built on Porsche’s reputation for beating more powerful front-engine competitors with lighter, mid-engine four-cylinder cars.

The 718 Boxster and Cayman revive the Porsche boxer four configuration, now with turbocharging and, of course, liquid cooling. 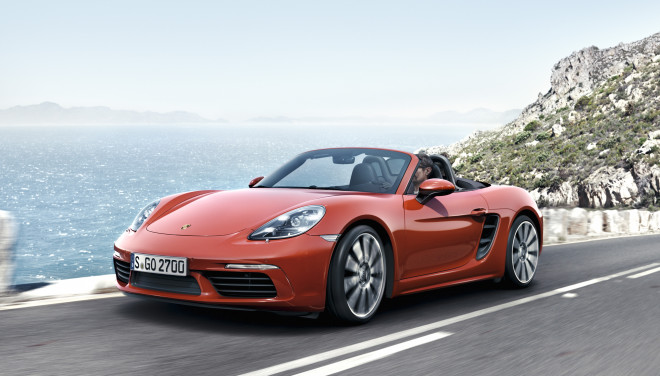 A New Look, Sort Of

Glance quickly at the 2017 718 Boxster, and you could be forgiven for not noticing that the body is mostly new. Only the luggage compartment lids, windshield and convertible roof carry over from the 2016 model. The real newsmaker lurks hidden beneath the rear compartment.

The new 718 series, as Porsche is calling the umbrella for the Boxster and Cayman, also reverses marketing positions of the two cars; the Cayman is now the entry Porsche sports car, starting $2,100 below the 2017 Boxster’s $56,000 MSRP. 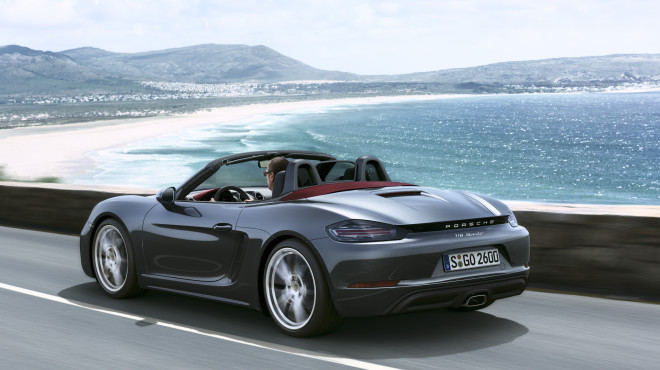 Four Under the Rear Floor

For 2017, all Boxster and Cayman models are powered by one of two new turbocharged four-cylinder boxer engines.

More Power, and a Different Character

The horsepower gains are impressive, but the higher torque at lower engine speeds is probably the bigger story here. The standard models gain 74 lb.-ft. over the old 2.7-liter six; the S variants add +43 lb.-ft. over their previous 3.2-liter sixes. More critically, the torque peaks arrive much sooner — below 2,000 rpm vs. 4,400-4,500 rpm with the sixes. There’s less need to rev the fours than the sixes, which some might miss.

Some will also miss the 6-cylinder’s sound. That’s not to say the new fours don’t sound good; they just sound different. Said Motor Trend: “The 718 Boxster S sounds unmistakably like a Porsche as the engine approaches its 7,500-rpm limiter.” 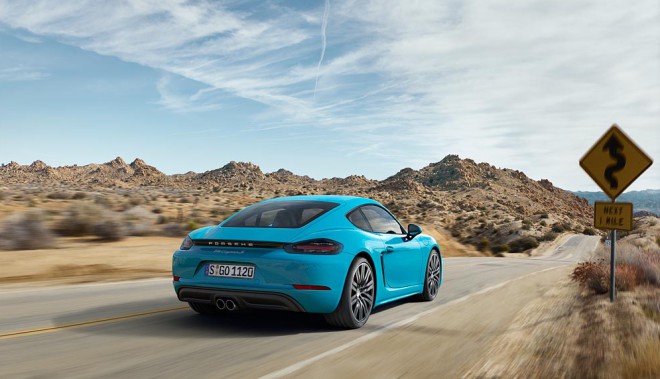 But Will You Miss the Six?

There is undoubtedly something melancholy about saying goodbye to a revered engine. Porsche, though, thinks the higher horsepower and torque, along with resultant quicker acceleration, will endear the new turbo fours to Boxster and Cayman drivers.

Both cars remain the lightest sports cars in their class at just under 3,000 pounds. The “slowest” claimed 0-to-60 acceleration you’ll find from Porsche for these two models is 4.9 seconds. That’s for the base engine and 6-speed manual transmission. Both have a top track speed of 170 mph.

Not long ago, those figures would have put a 911 on the trailer. Choose the 7-speed PDK and Sport Chrono package, and with Launch Control you can shave four tenths off that figure, according to Porsche. Step up to the 350-horsepower S models with a PDK, and the quickest claimed 0-60 time drops to 4.0 seconds flat. 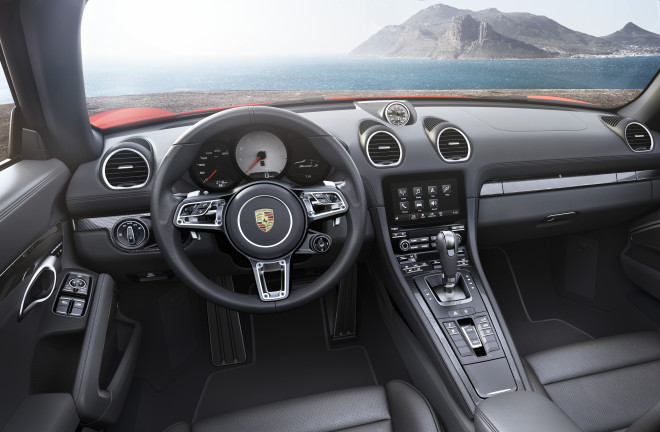 Porsche tweaked the suspension and steering in the new 718 Boxster and Cayman. The optional Porsche Active Suspension Management Sport Suspension lowers the car by 0.8-in. And you have to love the steering wheel design inspired by that in the Porsche 918 Spyder.

Porsche also redesigned the dash panel and added a new-generation Porsche Communication Management system. Navigation is available, along with the Connect Plus module that provides an array of online services. 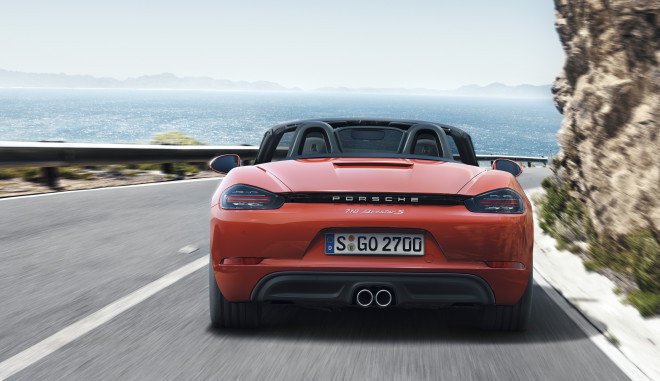 There may be a few purists who’ll wish Porsche had not appropriated the 718 badge from a great racecar that now draws $3 million at auction. Yet, as every Porsche sports car serves as a rolling testament to the marque’s rich racing heritage, the only downside to the new Boxster and Cayman naming convention might be that you’ll have to explain it to those who don’t know the history.