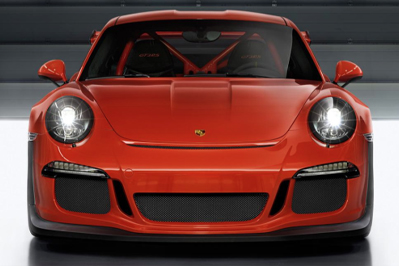 If you know what it means to “go to 11,” then you’re likely a fan of the cult-classic 1984 film “This is Spinal Tap.” In one scene of the faux documentary about a fictitious British hard rock band, guitarist Nigel Tufnel (Christopher Guest) shows filmmaker Marty DiBergi (Rob Reiner) that his amplifier volume control “goes to 11” rather than the customary 10 as maximum setting – and so therefore it must be louder.

Maybe there are some “Spinal Tap” fans at Porsche, because they took the 911 GT3, already the closest thing to a racecar in the 911 fleet, and pushed this road/track model to 11 to create the GT3 RS. RS, in Porsche-speak, is rennsport (racing). If you’re not yet a member of a track, the 911 GT3 RS is the car that may compel you to join.

Premier Financial Services has written numerous leases for this super 911, as customers have found the terms of the PFS Simple Lease more favorable than those offered by the factory. With an MSRP of $175,900, compared to $130,400 for the GT3, Premier’s leasing options on the 911 GT3 RS makes rennsport reachable.

As with the 911 GT3, the RS is built around the 911 Turbo’s wide body design. Those air scoops behind the doors do not feed intercoolers, however, but rather supply the special air intakes for these naturally aspirated models. For the GT3 RS, Porsche stroked the flat six to a full 4.0 liters, the largest-ever displacement for a 911 engine. 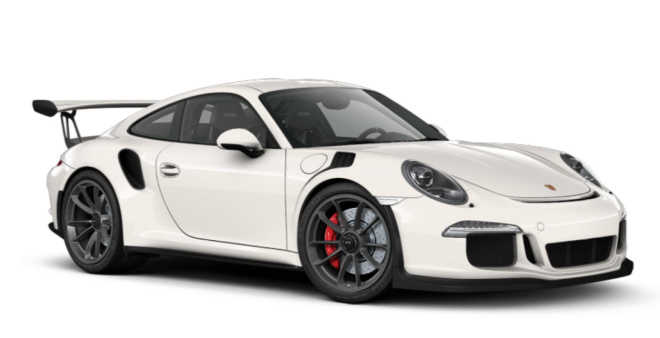 The dry-sump oil system and titanium connecting rods are straight from racecar experience, with the 8,800-rpm redline offering further evidence of track provenance. The RS engine’s 500 horsepower works out to an astounding 125 hp per liter. The larger displacement hikes peak torque a bit, too, now 338 vs. 324 for the GT3. The sole transmission choice remains the PDK.

Was anyone complaining that a 911 GT3 could muster zero-to-60 mph in 3.3 seconds? Well, you may not feel the drop to 3.1 seconds in the GT3 RS, which lists a 193-mph top track speed (compared to 195 mph for the GT3). Where you could see a difference, depending on your driving skill, is in lower lap times, and perhaps some louder “Ooohs” and “Ahhhs” from those admiring the car.

Winging It and Watching the Weight

You can see at first glance where Porsche cranked the aero to 11 for the 911 GT3 RS. The front fenders louvers reduce air pressure in the wheel wells generated by the turning wheels, thereby countering lift, a job reinforced by the big front splitter.

And then there’s the wing. Rear wings on 911s have grown considerably since the first ducktails sprouted on the RS 2.7 more than four decades ago. The tall wing on the Porsche GT3 RS is pure racecar in nature, adjustable to three angles of attack to add downforce

The wing, front fenders, front trunk lid and the engine hood on the GT3 RS are made from carbon fiber, and a magnesium roof panel further lightens the car. Yet, since the 911 GT3 was already on a low-cal diet, the weight savings in the RS adds up to a mere 22 pounds for a total of 3,031 pounds in standard form. Where the RS probably added a few pounds is in the 21-inch rear wheels, which stretch 12.5 inches wide and wear 325/30ZR21 Michelin Pilot Sport Cup 2 tires. The front wheels are 20 x 9.5 in. 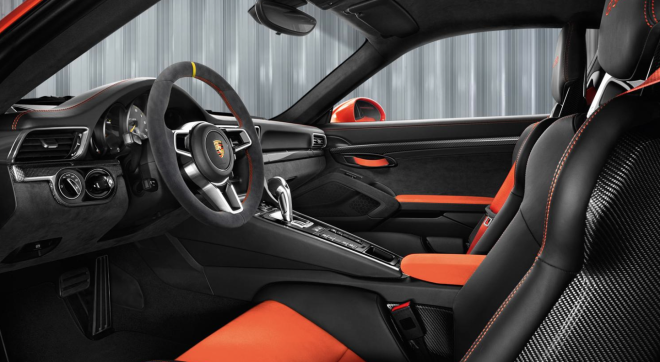 There’s no cost to adding optional 18-way power Sport Seats Plus, though you’ll surely add back in a few pounds over the standard carbon-fiber shell bucket seats. You could delete the stereo and air conditioning to trim a few pounds, but don’t expect any change back in your pocket if you do. Ceramic brakes are a $9,210 option; a lightweight lithium-ion battery is $2,300. 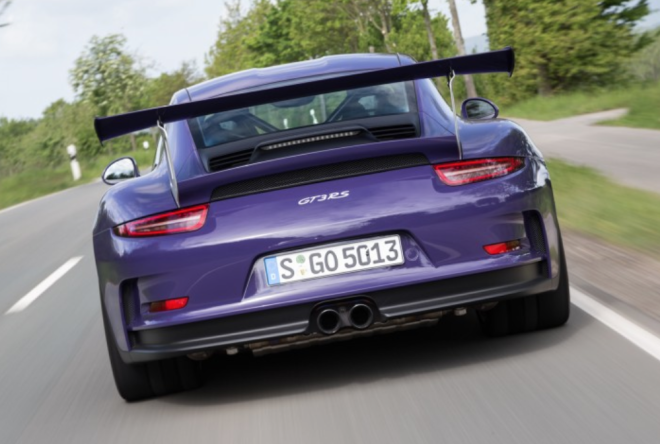 Lighten Your Financial Outlay By Leasing your Porsche with Premier

Premier Financial Services is your perfect partner for adding new or classic Porsches to your collection, whether leasing the 2016 911 GT3 RS,  financing a 911 Turbo S or purchasing a 934 Turbo RSR with cash, you’ll find the terms of its Simple Lease an ideal alternative in acquiring a Porsche. We’ve worked with Porsche dealers across the country, so if you’ve got a favorite dealer, chances are good that we’re already doing business with them.