Rolls-Royce has issued notice: The marque wants “younger and more socially-aware” customers. That’s part of the stated mission for the Dawn, the new drophead coupe (a.k.a. convertible). To emphasize the connected, social aspect, the company introduced the Dawn from Goodwood, England via an interactive globally streamed online launch this past September.

It’s also why Rolls designed the Dawn as a full four-seater, not a 2+2 configuration it deems “compromised” and “anti-social.” According to the rather ornately written media kit, the Rolls-Royce Dawn “will be the most social of super-luxury drophead motor cars for those who wish to bathe in the sunlight of the world’s most exclusive social hotspots.”

Those who are especially fiscally savvy may find that leasing a Dawn through Premier Financial Services will keep their money working prudently while they bathe in the sunlight. 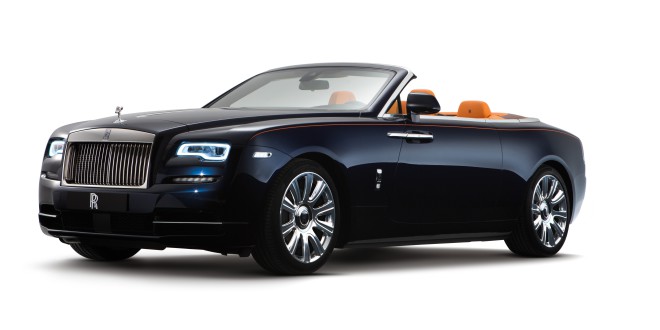 The Dawn, like the Wraith coupe, is based on the “small” Rolls-Royce platform that begat the Ghost sedan in 2009. Though the Dawn shares the Wraith’s 122.5-inch wheelbase, Rolls says the 80 percent of the Dawn’s body panels are exclusive to the open car.

The familial resemblance to the larger Phantom Drophead Coupe is undeniable, but the Dawn does come off as the sleeker sibling, and it might not be a crime to throw around the term “sporty.” But would anyone dare call the new Dawn a “hotrod”? In its media kit, Rolls-Royce did just that:

“With its high shoulder line, massive C-pillar and horizontally narrow side window aperture, when viewed from side-on and roof up, the car looks akin to a low-slung ‘hot rod’.”

So, Boyd Coddington meets Giles Taylor, Rolls-Royce Director of Design? Taylor, who joined the company just in time to finish up the Wraith, is keenly aware of the challenge of attracting new blood without alienating blue blood. Speaking to the weekly trade publication Automotive News, Taylor said that although the marque can take inspiration from 114-year history, it does not fall back on “retro” design. 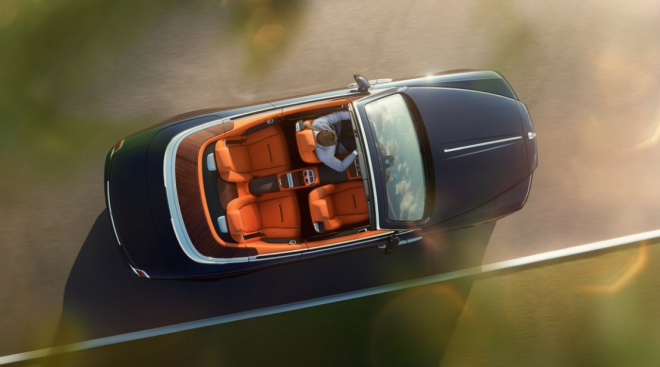 They Called Her Dawn

Rolls designers did, however, glance back in time to find a “muse” for the new convertible. (I don’t know about you, but “drophead” always makes me think of poor Anne Boleyn in Tower of London, awaiting the executioner’s sword.) That muse, not surprisingly, was the Silver Dawn. While the sedan was the first Rolls with a factory-issued body, the 28 Silver Dawn convertibles built from 1950-1954 were coachbuilt for individual customers.

Those young hotrodders that Rolls is courting with the Dawn will find plenty of power to lay rubber up and down the Côte d’Azur in the 5,700-pound car. The twin-turbo 6.6-litre V12 issues 563 horsepower and 575 lb.-ft. of torque, the latter peaking at a mere 1,500 rpm. As if a computer weren’t enough to ensure seamless shifts from the eight-speed automatic transmission, the Dawn also uses GPS data to anticipate the road ahead and prepare for the ideal shift.

Happy Together: Tradition and the 21st Century

Though not hand-hammered by graying craftsmen working from muscle memory rather than blueprints, the Dawn’s coachwork is nevertheless impeccably finished. Rolls is not exaggerating when it says the rearward-opening coach doors (“suicide doors” for ‘60s Lincoln buffs) with their stainless steel handles, polished wheels, tailipes and front and rear bumper jewelry, “create a priceless look and feel.” The Bespoke options should ensure that no two Dawns are ever ordered alike.

The door design, by the way, has a vital function according to Rolls: “The rear passengers do not merely ‘get out’ of a Rolls-Royce Dawn, but rather stand and disembark as if from a Riva motor launch onto a glamorous private jetty in Monaco or on Lake Como.” 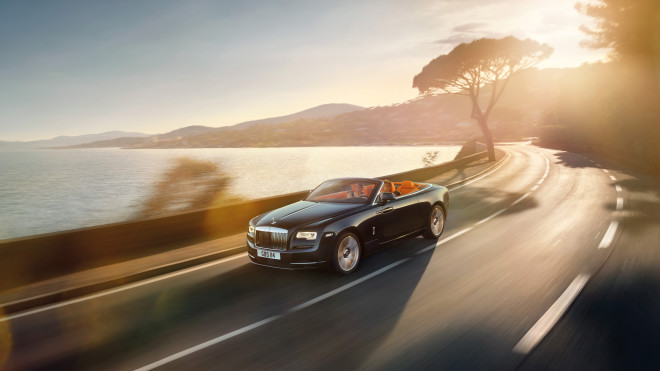 The Riva analogy certainly applies to the rear deck, crafted from open-pore Canadel paneling, which flows down the “waterfall” between the rear seats and around the cabin. Customers get their choice of wood.

Rolls stayed with a soft top for its new drophead (sorry, Anne) “for reasons of aesthetics, romance and brand appropriateness.” The company assures that with the top raised, the Dawn’s cabin will be as quiet as that of the Wraith. The quietude should make for an excellent environment in which to enjoy the 16-speaker Bespoke Audio system. But will those young hotrodders be listening to opera or that new rock ’n’ roll?

The top’s operation itself is also claimed to be the quietest in the world. No one should doubt that. 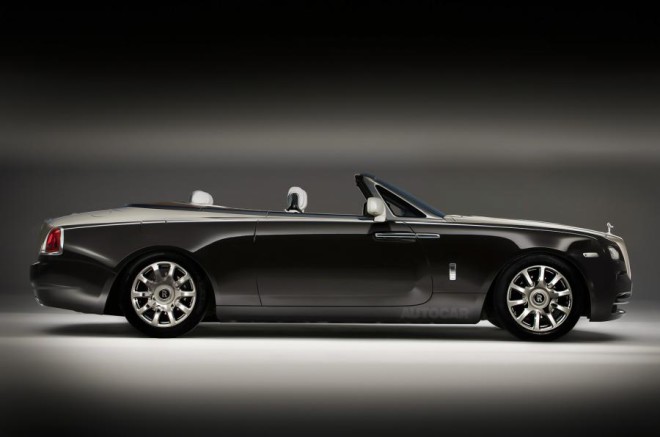 Whether you want to experience the grandeur of a 1950s Silver Dawn or this latest incarnation, your first call should be to Premier Financial Services. Premier has written hundreds of Rolls-Royce leases and has worked with Rolls-Royce dealers across the country.