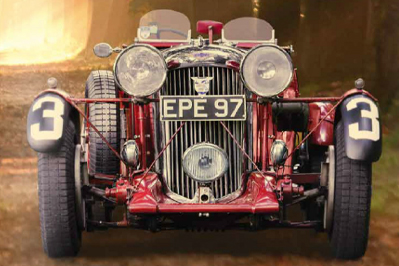 The Goodwood Revival has become one of the world’s most popular vintage and antique car events of the year. Channeling eras past… present day visitors will experience the beautiful historical venue as they participate in vintage style dress and theatrical events throughout the three-day weekend in Chichester, England. This year’s event will include historic racing for vehicles from pre-war to 1966, a tribute to Bruce McLaren, a concours of over 4,000 vehicles from before 1975 with the Best in Show to be selected by Sir Sterling Moss and the annual favorite The Freddie March Spirit of Aviation Display, a collection of rare and important aircraft from the 1920s onwards.

Bonhams Auctions, one of the event’s founding sponsors will be offering a high quality sale of sports, competition and touring cars. Premier is excited to share their select few ‘Cars to Watch’ at the Bonhams Goodwood Revival Auction for this coming weekend.

Premier’s Southeast Sales Manager, Chris Warren, is watching the 1989 Ferrari 328GTS Targa Convertible Coupé at Lot 312.  Chris is a huge fan of the Ferrari 328. More importantly, the estimates on this car prove to be a great indication that the collector car market remains strong. The Ferrari 328 GTS offered here was delivered new to Nigel Mansell in 1989. One of Britain’s best-loved Formula 1 heroes, Nigel Mansell excelled in a career that spanned 15 seasons and is ranked among the greatest racing drivers of all time.

Premier’s West Coast Sales Manager, Juan Garcia is watching the 1958 Type Scarab Chevrolet Mark I Sports Racing Two Seater at Lot 332. This Sports Racer is absolutely stunning, it has proven its front line capabilities in the hands of both Don Orosco himself and his son, Patrick. This is more than just a younger-sister Scarab-Chevrolet, this is the uniquely runnable, race-able, entirely practicable ‘Team America’ legend, designed in 1957-58 and built with abiding respect and adoration by Team Orosco at the outset of the 21st Century.

Michelle Yancey, Premier’s Southwest Sales Manager is loving the red 1988 Ferrari Testarossa at Lot 302 mostly because it reminds her of the ever popular, Magnum PI television program featuring Tom Selleck. Rivaling Lamborghini’s Countach for presence, the Pininfarina-designed Testarossa succeeded brilliantly, the gill slats feeding air to its side-mounted radiators being one of the modern era’s most instantly recognizable  and copied styling devices.

Dave Accorsi, Premier’s Midwest Sales Manager is intrigued by the 1964 Daimler SP250 ‘Police Specification’ Roadster at Lot 311. This Daimler has won awards at many concours, and has a very unique V8 engine, unquestionably the car’s biggest virtue. An outstandingly flexible unit designed by Triumph Motorcycles’ Edward Turner, the smaller of Daimler’s two V8s produced 140hp, an output good enough to propel the SP250 to a top speed of 125mph.

Northeast Sales Manager Keith Neelans can’t keep his eyes off the timeless classic 1949 Jaguar XK 120 Alloy Roadster at Lot 315, it was a classic in 1949 and it hasn’t faded yet. This particular Jaguar is one of 240 alloy bodied XK120’s and a two time Colorado Grand and California Mille participant. Told by the post-war Attlee government to ‘export or die’, the British motor industry responded valiantly, none more so than Jaguar Cars, soon to become the UK’s biggest US-dollar earner thanks in no small measure to the success of its XK120 sports car. Ironically, the XK120’s creation had only come about because delays in the gestation of the MkVII saloon had forced Jaguar to find an alternative method of bringing its new XK six-cylinder engine to public attention.

Don’t forget to review your auction basics here before attending the Bonhams Goodwood Revival Auction and be sure to contact Premier Financial Services if you will be bidding.  Premier’s Simple Lease is a perfect alternative to financing an exotic or vintage marque.  Whether it is a classic Jaguar or vintage Ferrari, Premier can cater a lease to your driving needs.