This Day In History: The First Corvette 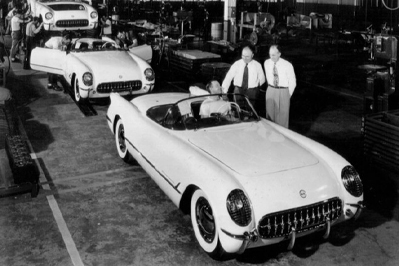 Friday, June 26th marks the 15th Annual Drive Your Corvette To Work Day!  On Friday, June 30, 1953, workers at the Chevrolet plant in Flint, Michigan, assembled the first Corvette, a two-seater sports car that would become an American icon. The first completed production car rolled off the assembly line two days later. One of just 300 Corvettes made that year. Corvette enthusiasts across the United States are encouraged to make “America’s sports car” their commuter car for the day. So every year, the Friday closest to June 30, is commemorated as Drive Your Corvette To Work Day.

The History of Corvette

The idea for the Corvette originated with General Motors’ pioneering designer Harley J. Earl, who in 1951 began developing plans for a low-cost American sports car. He wants one that could compete with Europe’s MGs, Jaguars and Ferraris. The project was eventually code-named “Opel”. In January 1953, GM debuted the Corvette concept car at its Motorama auto show at the Waldorf-Astoria Hotel in New York City. It featured a fiberglass body and a six-cylinder engine and according to GM, was named for the “trim, fleet naval vessel that performed heroic escort and patrol duties during World War II”. The Corvette was a big hit with the public at Motorama and GM soon put the roadster into production.

Off the Production Line

The first Corvette off the production line in Flint was hand-assembled. It featured a Polo White exterior and red interior. In addition, two-speed Powerglide automatic transmission, a wraparound windshield, whitewall tires and detachable plastic curtains instead of side windows. The earliest Corvettes were designed to be opened from the inside and lacked exterior door handles. Other components included a clock, cigarette lighter and red warning light. It activated when the parking brake was applied–a new feature at the time. The car carried an initial price tag of $3,490 and could go from zero to 60 miles per hour in 11 or 12 seconds, then considered a fairly average speed.

In 1954, the Corvette went into mass production at a Chevy plant in St. Louis, Missouri. Sales were lackluster in the beginning and GM considered discontinuing the line. However, rival company Ford had introduced the two-seater Thunderbird around the same time. GM did not want to be seen bowing to the competition. Another critical development in the Corvette’s success came in 1955, when it was equipped with the more powerful V-8 engine. Its performance and appeal steadily improved after that. After, it went on to earn the nickname “America’s sports car”. It would become ingrained in pop culture through multiple references in movies, television and music.

Lease a Classic Corvette with the PFS Simple Lease

Premier can do so more than just finance your classic Corvette with our PFS Simple Lease. Additionally, we specialize in finding resources for appraisals, transportation, restoration and more through partnerships with world-class organizations such as Cosdel International who assists with the importation and exportation process during international transactions.

In 1997, Premier Financial Services began helping clients obtain their dream vehicles through our PFS Simple Lease program. This has earned us the distinction as the nation’s leading lessor of exotic, vintage, highline and luxury motorcars. Our standard of excellence is unsurpassed in the industry, largely due to our committed team of specialists. Further, they are all ready to assist you every step of the way. Contact us today and make the car you dream about a genuine reality.