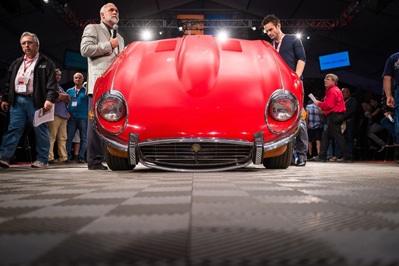 Southern California is well known for its classic car lifestyle. Newport Beach makes the ranks among the Top Ten Resort Towns in the U.S. That makes this weekend’s Russo & Steele auction destination a fantastic location. As auto enthusiasts, we watch for upcoming auctions to remain up to date on current market trends, and this auction is another perfect opportunity to do so. Check out the cars we’re watching this weekend, and if you’re attending, you can connect with Premier’s West Coast Sales Manager Juan Garcia.  Juan is ready and able to assist you with your auction bidding and purchase.

Doug Ewing, Premier’s VP of Sales will be watching the 2006 Ford GT 193. Likewise, Russo & Steele is calling this car a “true American Supercar legend in the making”. Further, the car comes with Le Mans style racing stripes, a McIntosh audio system and lightweight BBS wheels and very low mileage. Can you see yourself driving it? You can with Premier’s Simple Lease.

Premier’s Midwest Sales Manager, Dave Accorsi is eager to see how the 1973 DeTomaso Pantera does at auction. In the early 1980’s Dave worked for a Lincoln dealership where DeTamaso’s were serviced. Consequently, according to Russo & Steele this particular vehicle is rumored to have been owned by Matt LeBlanc. You may remember him as ‘Joey Tribbiani’ from the hit series Friends. “How you doin’?”

Premier’s West Coast Sales Manager, Juan Garcia has chosen an American classic in the 1966 Shelby GT 350 Fastback to watch, among others, while he is in attendance at the auction. In addition, documentation has this Fastback is as one of 800 black and gold cars with an automatic transmission.

Premier’s Northeast Sales Manager Keith Neelans,  our lifelong Porsche-fan, has his eyes on the 1957 Porsche 356 A. Cabriolet production numbers increased greatly with this model and its all metal frame is believed to be original. Further, this car is part of in the limited production of the 356 A Cabriolets, the 50th of the 392 produced in 1957.

Chris Warren, Premier’s Southeast Sales Manager, has high hopes for the 1972 Ferrari Dino coming up at this weekend’s auction and has particular interest in how high the market value for this vehicle will climb. Additionally, this Ferrari is a great opportunity to acquire that beautiful vintage car you have been dreaming about.

Premier’s Southwest Sales Manager, Michelle Yancey has chosen this 1974 Porsche 911 Coupe this weekend because she loves a classic Porsche, and she loves the year 1974. According to Russo & Steele this vehicle is an excellent opportunity to own an exceptional head turning Carrera RS look at a fraction of the cost!

Premier’s corporate office team is watching this unique piece of history, maybe the Premier Sales Team could use it for their road trip to our annual sales meeting in Woodbury, Connecticut next week!