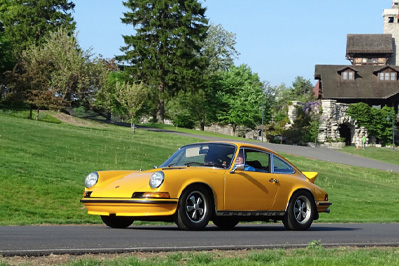 The New England 1000 is put on by Vintage Rallies and is an all-inclusive event. It features luxury hotels, gourmet restaurants, and fun things to see and do. Everything is handled for you, including luggage, experienced mechanics and free loaner sports cars if your rally car breaks.

It all starts with the cars. Our Car of the Rally Award went to Steve and Michelle Wolf’s 1954 Ford SAF Comete Monte Carlo. It’s a car so rare, I’d never even heard of it, let alone seen one. Under the Pinin Farina-styled body built by Facel, there’s a 3.9-liter Flathead Ford V-8. Who knew?

Our Spirit of the Rally Award went to Rob and Patricia Moler. They drove a 1957 Ferrari 250 GT Testa Rossa. Because his restorers started with the pontoon fender aluminum bodywork that raced at Sebring in 1958 and built a car under it, Rob Moler is careful to call his superlative machine a “replica”. Trust me, at any world-class concours this summer, you’ll find cars that were restored from a number plate and a stack of parts. Additionally, cars that are much less “real” than Rob’s immaculately authentic Testa Rossa.

Bob and Sandy Cushman brought a gorgeous 1959 AC Ace-Bristol, finished in a subtle gray-green that gives it an ethereal, almost ghostly aura. We all unanimously decided we’d rather have this delicate descendant of the Tojeiro-Bristol than a later Shelby Cobra. Cobra’s often substituted brute force for precision under the same basic body shell.

Then there’s Peter and Kathy Sachs’ 1961 Ferrari 250 GT Pininfarina Aerodynamica Berlinetta Speciale. This one-off was built for the Ferrari importer in France. It looks very much like a slightly shrunken Ferrari 400 Superamerica, but erected on a full-race 3-liter chassis. Spectacular!

Those are just my special favorites. In addition, we had Jaguar XK-140 and XK-150 Roadsters, Mercedes-Benz 280SE and 300SE Cabriolets, a lovely little Alfa-Romeo GT 1300 Junior, a Maserati Mistral 4.0 Coupe fresh from the restoration shop and the familiar Ferrari 365 GTS/4 Spyder of Joe and Kate Hayes.

Of course, it’s also about the driving. We started from one of our favorite resorts, Mohonk Mountain House outside New Paltz, New York. Mohonk is still owned by the Smiley family that founded it in 1869. Sunday afternoon we held an informal concours display of our rally cars around the Mohonk Garden, joined by a local BMW club and Lamborghini club who came for lunch.

Monday, we rallied through the Catskills to Saratoga Automobile Museum and lunch at the historic Gideon Putnam hotel. In the afternoon, we rallied to Bennington, Vermont to visit Hemmings Car Collection, then south to posh Lenox, Massachusetts and Cranwell Resort. The Cranwell was built in 1894 as a private mansion for a Vanderbilt relative John Sloane. Later, it was turned into a luxury resort twenty years ago. It’s one of our favorite American hotels.

Tuesday, we zipped all the way to lunch at the 1801 Inn at Grafton in Grafton, Vermont, one of the oldest continually-operating hotels in America, now owned by the non-profit Windham Foundation. From Grafton, we had a lovely drive back to Lenox. There, a checkpoint at Brian Donovan’s Jaguar shop before dinner at trendy Bistro Zinc in Lenox.

On Wednesday, we headed South. We stopped in Winsted, Connecticut to visit Sam Posey’s wife Ellen, at her mammoth American Mural Project before heading to Westport on the shore. Next, we hit a checkpoint at Dragone Classic Motorcars. Lastly, our traditional New England lobster bake at Bill and Ann Scheffler’s home on Long Island Sound.

On our way back to Mohonk, we stopped at Collector Car Garage in Bedford, New York, an unbelievable automobile storage facility arranged like a three-story, 400 car concours. Where else can you see a McLaren F1 next to a Porsche 918 next to two Porsche Carrera GTs? Secondly, across the aisle is a landmark Cisitalia 202 and the Bugatti Type 57C Stelvio. Additionally, that Buggati is the feature car at Bonhams Greenwich Auction. Incredible. From Bedford, we toured on little back roads across Westchester County, across the Bear Mountain Bridge, then along the Hudson River and back to Mohonk.

Thursday, we rallied through the Catskills and Southern Adirondacks to Cooperstown, New York. Lunch was at the lakeside Otesaga Hotel, and we got to visit the famous Baseball Hall of Fame, Fenimore Museum and Farmers Museum. Another gorgeous afternoon drive brought us back to Mohonk Mountain House and our Victory Banquet.

After 1034.5 miles of driving, Chris Nast, III and his wife, Jean McKinney—Jean is Briggs Cunningham’s grand-daughter—were the only team to Zero the rally. Marc and Renee Perlman were second with 136 points; Scott and Mary McCuskey were third with 476 points. This was a particularly difficult Vintage Rallies event, mostly because for the first time in 23 years, we went into Southern Connecticut to visit Bill and Ann Scheffler. Too much traffic!

The cars, the driving, the scenery, the hotels and restaurants, the new places to visit, the rally competition…but it’s really all about the people! New England 1000 2015 was our 86th event in 23 years.  Our charity for this year’s New England 1000 was Family of New Paltz Food Pantry. Local artists Craig and Pamela Booth, cartoonsbybooth.net, agreed to create charming sculptures of rallyist’s cars in return for donations to our charity. A dozen teams took advantage of this offer. Thank you, Booths!

Speaking of generosity, Steve Markowski of RPM VT volunteered to supply free back-up sports cars for any rally team whose car broke. Our group could choose from an Austin Healey 100, Porsche 912, or an Alfa Romeo 1750 Spyder Duetto. Additionally, choices include an Alfa Romeo Montreal or Porsche 914. Elliott Thrasher and Scott Astrofsky had their Jaguar XK-150 break on Monday morning, and managed to drive every back-up car during the week. Scott eventually bought the 914 to bring home!

Bottom line – we had beautiful sunny weather, great roads, great meals, great hotels, great cars, fun things to see and do. Most importantly, a terrific group of people who laughed and talked and bonded and had fun together.