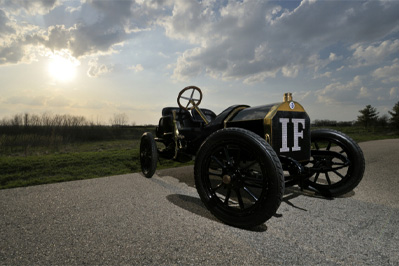 This rare 1908 Isotta Fraschini FENC was acquired by Harold Peters in 2013 through Mecum auction house. The acquisition fulfilled a personal goal set by Harold earlier in the year without expectation that it would come to fruition so quickly. Harold enthusiastically told Premier Financial Services about his experiences since leasing his FENC. Additionally, he added how grateful he is for the seamless process Premier provided in acquiring a car he had been following for nearly 40 years. The enthusiasm is not lost on Premier. We are equally as thrilled when we’re able to assist our customers in acquiring such unique motorcars.

At age 14, while reading his first classic automobile book, “The Great Cars” by Ralph Stein, Harold fell in love with the FENC. As car lovers will attest, the restoration process can be just as exciting if not more than driving the car on the open road. While 100 of the models were built, it is believed that only four remain in the world. Harold’s car, #6023,  is the last remaining car in the Americas.

This particular car is registered as a 1908 model year. However, historical research reveals that the road going models were designed in 1908, built in 1909 and arrived in New York from Milan in January 1910.

Along with the painstaking cosmetic restorations the FENC is currently undergoing engine reconstruction. The FENC is a low-powered vehicle by nature. However, when Harold adopted the antique piece, he decided to work on improving its power. This is due as it was not performing with the same gusto as the other three FENCs, Likely, this is due to a previous restoration incident in 1995 which left the vehicle’s top speed at 15 mph. FENC’s are capable of reaching 45 mph with road gears and 75 mph with racing gears. Harold has been able to identify and rectify a carburetor issue which was causing poor throttle response and fuel delivery. This change brought the FENC’s speed to 27 mph. He is anticipating the FENC will to return to its 45 mph factory rated speed once he improves the current state of the camshaft.

The FENC engine consists of a 1327 cc SOHC motor with 20 horsepower and 2500 rpm and a 4 speed transmission along with impeccable steering and powerful brakes. This amazing vehicle has not gone unnoticed by various concours, and has been invited to Concorso Italiano this summer. Last year alone the car took first place in the “Pre-War Italian Competition Cars Through 1942” class at Forest Grove in Portland. IT was displayed in great company alongside Jon Shirley’s 1938 Alfa Romeo 8C 2900 B Touring Berlinetta. Also in attendance, David Cohen’s 1933 Alfa Romeo 6C 1750 GS Figoni and David Smith’s 1938 Alfa Romeo S11 Corto.

The FENC placed 2nd in the Antique Class at the Pacific Northwest Concours in Seattle. Further, this was alongside Fountainhead Museum’s 1917 Owen Magnetic Touring(1st). Lastly, along with George Wingard’s 1914 Mercedes Grand Prix and Chuck Nelson’s 1907 Peigeot 92D Labourdette Victoria. Harold is humbled to be surrounded by other auto enthusiasts in celebration of the antique class.

Harold’s car, #6023, arrived in New York City in 1910. Consequently, it was sold for $2,700 at the Isotta Import Company. The car was rediscovered in 1939 in a Bronx junkyard by Alec Ulmann and Smith Hempstone Oliver. Surprised by what they had found, they invited automobile author and photographer Ralph Stein to view the car which inspired his Isotta chapter in “The Great Cars”. In later years when Harold read the book, he fell in love. Soon, he set out to find his very own FENC.

Harold, with Premier’s assistance, acquired this FENC from Mecum in 2013. Prior to that, Bonhams held possession of the car. They says that the FENC is a “rare survivor of a ground-breaking design. And arguably, the spiritual ancestor of the Bugatti and Aston Martin marques. This remarkable little car with its desirable semi-racer bodywork is surely an essential component of any collection of early sporting cars. It would be a welcome participant at any major car meet worldwide.”

The FENC was inspired by the FE racing model designed for the 1908 Grand Prix de Voiturettes at Dieppe by Giuseppe Stefanini. Interestingly, Alfieri Maserati was the FE team driver at the 1908 Grand Prix de Voiturettes at Dieppe. The FENC had a very advanced design for its time period. However, it is thought to have inspired Etore Bugatti in crafting his first Bugatti. Further, this was followed shortly after the FE/FENC models. To learn more about the heritage of the vehicle, click here.

This #6023 FENC has seen few owners over the last century and Premier Financial Services is delighted to have assisted Mr. Peters on the acquisition of this rare masterpiece. Please contact us with any leasing questions you may have now or in the future.