Cars To Watch: The Andrew’s Collection at RM 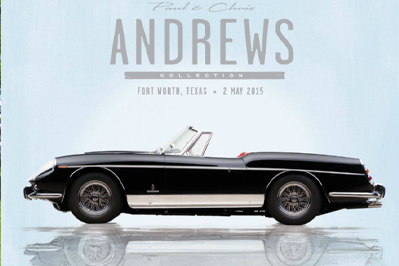 This weekend is the RM Southeby’s Andrew’s Collection Auction in Fort Worth, Texas. The collection is well known and admired by the global collector community. It has been a collaborative effort between father and son who love all things car-related from design to mechanics. The auction will offer 78 motor cars and a vast collection of auto memorabilia. All lots will be offered without reserve, selling to the highest bidder. In addition, to read more about the Andrew’s Collection, view the digital catalog here. Premier’s Southwest Sales Manager Michelle Yancey will be in attendance as well, contact Michelle for more details about getting pre-approved before bidding begins.

Premier’s Vice President of Sales, Doug Ewing, 15-year Premier veteran has a certain affinity for Porsches. He will be watching the 1989 Porsche 911 Turbo Coupe at Lot 243. This Porsche is estimated between $80,000-$100,000 and is the most sought after model because 1989 was its last production year. The 911 Turbo was the first street legal automobile to feature turbocharging, a technology only previously used in race cars.

Michelle Yancey,  Premier’s Southwest Sales Manager will be in attendance and will be watching the 1962 Shelby 289 Competition Cobra at Lot 237. Further, this Cobra is expected to fetch between $2,200,000- $2,600,000, this exact car was the first racing specification Shelby Cobra sold to the public on October 23, 1962 to John Everly of Winfield Kansas. Lastly, Michelle will be attending the Auction Reception Friday May 1st from 7-9pm.

Premier’s Southeast Sales Manager, Chris Warren has his eye on the 1963 Ferrari 400 Superamerica LWB Coupe Aerodinamico by Pininfarina. Chris helped one of his own customers attain this model Ferrari in the past. Moreover, this Ferrari’s estimated worth is between $3,500,000-$4,500,000 and can be found on Lot 196. This car was the Platinum Winner at the 2011 Cavallino Classic. Lastly, the Ferrari Superamerica is known as the grandest of Ferrari touring automobiles with impeccable performance and uncompromising design.

Keith Neelans, Premier’s Northeast Sales Manager, is watching the 1990 Lamborghini Countach as it celebrates its 25th anniversary. This car is anticipated to auction between $375,000-$475,000 at Lot 192. Additionally, this particular car has very low mileage showing only 1,240 km. Likewise, in celebration of the 25th anniversary year Lamborghini revealed a special edition Countach designed by Horacio Pagani with subtle changes designed to allow more comfort to the driving experience.

Premier’s West Coast Sales Manager, Juan Garcia has his eye on the 1959 Mercedes-Benz 300 SL Roadster at Lot 201 estimated to auction between $1,300,000- $1,600,000. In addition, this car won Best in Class at the Amelia Island Concours d’Elegance. Further, the 300 SL developed from lessons learned in racing which led to technological advancements making it the fastest street legal car of its day.