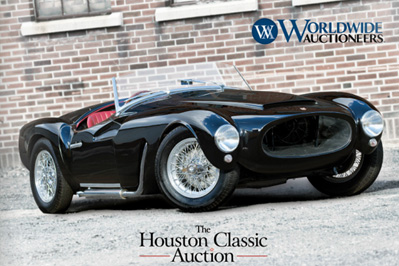 For many, vehicles are a statement piece, a work of art, and a prized possession. This weekend at The Houston Classic Auction the PFS Team is keeping an eye on a few specific autos. Much of the information below came from Worldwide Auctioneers, a Vintage Motorcar Specialist. However, you can read even more about the cars at the Houston Classic Auction, by clicking here.

“Consistently ranked among the most beautiful and engaging automobiles ever conceived, the ‘Dino’ sports car was an inspired product of Ferrari’s V-6 racing-engine development program of the 1950s and 1960s. Therefore, immediately successful, the Vittorio Jano-engineered ‘Dino’ V-6, named in honor of Enzo Ferrari’s late son Alfredino, powered Ferrari to its first Grand Prix Manufacturer’s Championship and team driver Mike Hawthorn to the driver’s title in 1958.”

“Most often known simply as the “Turbo,” the car was internally designated Type 930. It immediately garnered rave reviews by the era’s road testers and hard-core driving enthusiasts. Fast but demanding, with a massive kick from the turbocharger beyond 4,000 rp. Additionally, the 930 Turbo routinely challenged even highly skilled drivers and made those who mastered it even better.”

Premier’s Midwest Regional Sales Manager, Dave Accorsi is curious to see how the 1972 Ferrari 365 GTC 4 Berlinetta will fare at the auction. It is estimated to bring between $320,000-$360,000 at Lot #72. Additionally, this vehicle is one of only 500 produced and has a classic V-12 Ferrari performance.

“Only 500 examples were ultimately produced over an 18-month production run spanning 1971 and 1972. Today, the 365 GTC/4 has heartily attracted the attention of learned Ferrari collectors and enthusiasts. Ferrari expert Michael Sheehan, in his August 2008 Forza article “The Classic V12s”, noted that the Pininfarina coachwork of the 365 GTC/4 tends to display better panel fit and fewer rust issues than its more famous stable-mate and he went on to refer to the GTC/4 as “the bargain 1970s Ferrari supercar.”

Premier’s Southwest Regional Sales Manager, Michelle Yancey is watching the elegant 1953 Chevrolet Corvette Roadster this weekend in her home state of Texas. Firstly, this Corvette’s estimated value is between $275,000-$325,000 and is placed at Lot #21. Secondly, it is one of 300 Corvettes produced for the Inaugural 1953 Model Year.

“This wonderful first-year example is the 220th of the 300 Corvettes produced for 1953. Further, it stands as one of as few as an estimated 225 survivors remaining in existence today.”

Premier’s Northeast Sales Manager, Keith Neelans is following the 1969 Porsche 911 S at Lot #17. This Porsche has an estimation of a bid between $200,000-$250,000. It is accompanied by a copy of Factory Kardex Build Record and a Porsche Certificate of Authenticity.

Premier’s West coast Regional Sales Manager, Juan Garcia is eager to see how this 25th anniversary Lamborghini Countach will do at auction this weekend. The vehicle up on the auction for an estimation of bid between $400,000-$500,000 at Lot #43.

“The Lamborghini Countach is one of the most iconic poster cars of all time. For example, its wedge shaped, Bertone design was revolutionary in its prototype debut at the 1971 Geneva Motor Show. Powered by a mid-mounted V-12, the Countach produced between 375 and 455 horsepower depending on the production model. In addition, the Countach originally sported refined lines with the absence of wheel arches, rear wings, and colossal air ducts. As production years continued from 1974 all the way through 1990, the styling changed drastically becoming more radical as the years progressed. Lastly, In total, there were approximately 2,049 Countachs produced in five generations in total.”

Truthfully, the entire PFS team is really excited about the 1981 Checker Marathon Margaritaville Taxi up for auction at Lot #59. In addition, the colorful taxi is an estimate to be worth $15,000-$20,000. Taking a cab ride has never been more fun!