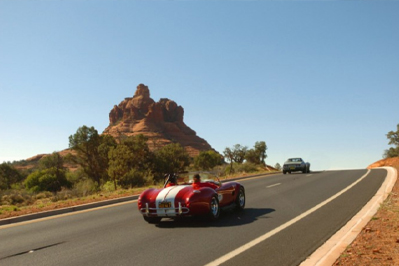 Overview: The Copperstate 1000 was founded in 1990 by the Men’s Art Council of the Phoenix Art Museum and is now regarded around the world as a “must attend” rally. Each year 80-double occupancy vehicles participate in the four day rally with magnificent views. In addition, each year a new route covers 1,000 miles of beautiful desert terrain, verdant river valley and alpine landscape throughout the state of Arizona and beyond. Rally-goers have a deep sense of comradery and each year the  community seems to expand and strengthen. The memories and friendships made are a large part of Copperstate’s repeat rally devotees, equally appealing is the significant charitable benefits the rally supports.

On Saturday April 18th join the Copperstate Cruise-In Car Show from 9am-2pm at Tempe Diablo Stadium. Likewise, the Stadium was originally built in 1968 and was renovated in 2005 to support 14,000 guests. The Cruise-In is your chance to see some of the rarest vintage automobiles ever created. Further, the classic cars will be joined by some modern trucks…food trucks. Phoenix’s favorite food trucks will be cooking-up a taste-tempting array of delicious eats and gourmet treats. Consequently, the Stadium’s concessions will open as well, including their beer garden. The 80-90 vehicles participating in the annual Bell Lexus North Scottsdale Copperstate 1000 will depart the stadium at noon.

The two charities benefiting from the Scottsdale rally are The Phoenix Art Museum and the Copperstate 10-90 Foundation.The Phoenix Art Museum is the largest art museum in the Southwestern United States which showcases masterpieces from around the globe, fostering a culturally diverse environment in Scottsdale. In addition, the museum is well known in the area for its festivals, live performances, independent art films and educational programs. Further, the Copperstate 10-90 is a non-profit organization which provides emergency benefits to families and dependents of officers killed in the line of duty. To read more about the organization, please visit their website, here.