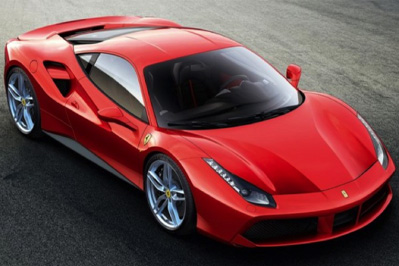 If you haven’t already met Ferrari’s new 488 GTB, then consider this your introduction. It is one of the sleekest turbocharged vehicles of 2016. A successor to the Ferrari’s beloved 2009 458 Italia, the 488 keeps all the promises made by the automaker. Ferrari guaranteed all of its future engines will either be turbocharged or hybridized to meet public and environmental demand.

While the engine is smaller than its notable forerunner, the 488 gets its designation from the vehicle’s displacement. This provides an ample 488 cubic centimeters per cylinder. It worksout to a total of 3.9 liters for its 90-degree V-8. Yet, in spite of having less displacement than the 458, its 661 horsepower at 8000 rpm and 561 lb-ft of torque at 3000 rpm significantly outshine its predecessor. That vehicle already came in at a respectable 597 horsepower at 9000 rpm and 398 lb-ft. What does this mean for the savvy sports car driver? Zero to 60 mph in three seconds and, according to the manufacturer, zero to 125 mph in 8.3. It’s that fast.

Another remarkable feature of the new 488 is its ability to hold itself comfortably on the road. This is regardless of high speeds and who’s behind the wheel. With 50% more downforce than the 458, as well as a reduction in drag, the 488’s aerodynamics make certain the vehicle remains securely fastened to the roadway. Additionally, its electronic differential and enhanced Side Slip Control system work together seamlessly. That allows anyone to give the exotic racer a run for its money reason to feel relaxed while cornering.

The beauty doesn’t end there, however, especially for those who appreciate what’s on the vehicle’s exterior as much as what’s under the hood. Say goodbye to the flappable winglets of the 458 and hello to the 488’s new 3-section grille. And though many enthusiasts loved the air pockets beneath the 458’s headlights, Ferrari’s 488 has large rearward scoops. They grab generous amounts of air and let the athletic supercar inhale bigger and better than ever before.

Ready for the Road

Taking lessons from the design of the 458, the new Ferrari’s plexiglass cover sticks to the predecessor’s formula for success, with only slight alterations that make it 1.6 inches longer and .6 inches wider while maintaining the 458’s height. Its interior even looks familiar to the previous model, featuring Daytona-style seats, straight-forward controls and switches, and a multifunction steering wheel overlooking a sizeable central tachometer and digital gear indicator bordered on either side by configurable displays.

Prices for the Ferrari 488 are still waiting to be released, but estimates put it upwards of the 458’s $243,000 price tag. Deliveries are expected to start in July for special customers, but should pick up soon afterward for everyone else in the fall. If you want a first look, however, you can see the exotic sports car at Geneva’s auto show for those traveling to Europe, while those in the U.S. can see it in August at Pebble Beach.

Have a favorite Ferrari model of your own? Are you excited for the 488? Let Premier Financial Services get you behind the wheel of your own dream Ferrari or exotic car. Contact us today to find out how we can help.