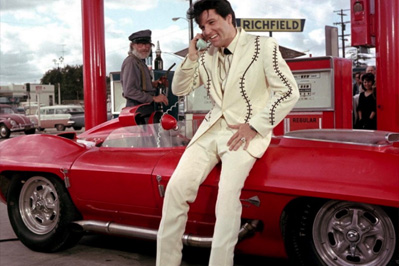 The King of Cars

Elvis Presley was not only the King of Rock and Roll. He was also one of the top car collectors in the world during his lifetime. His fever for the automobile started in the early 1950’s. It brewed after borrowing a ’51 Chevrolet from a friend who ran a local repair shop in order to take his driver’s test. Like most teenagers, Elvis was immediately drawn to being behind the wheel, and as he began to amass a considerable fortune through his musical and theatrical career, he quickly began adding to his collection.

A true artist, Elvis was mostly attracted to how a car looked over what was necessarily under the hood. As his friend Joe Esposito put it, “He didn’t care if it was a $5,000 car or a $50,000 car or what brand it was…If Elvis saw a car he liked in the window, he’d stop and buy it. That was basically it. If the dealership was closed and we knew the owner, we’d call and wake him up. We’d say, ‘Listen, Elvis wants to buy this car’, Naturally the guy would meet us there, because if he didn’t, Elvis would say, ‘Well, we’ll find someplace else.’”

Partial to Cadillacs, the first car Elvis purchased was a pink and white 1954 Cadillac. However, it caught fire on a road between Hope and Texarkana, Arkansas, in 1955. He was away on a trip with the Blue Moon Boys. Soon afterward, Elvis bought what has become one of the most iconic vehicles in the world today. That is his blue 1955 Cadillac Fleetwood Series 60. It was later repainted by a neighbor in a color specifically designed for the King – “Elvis Rose” – and which he soon after gave to his mother as a gift. It became known as the Pink Cadillac, becoming synonymous with the King himself.

From there, Presley continued growing his collection. He fed his love for American-made cars by adding notable editions. This includes his 1956 Cadillac Eldorado and 1956 Lincoln Premiere hardtop coupe. However, it wasn’t long before he grew fond of the slick designs of European automobiles. This began after leasing a white BMW 507 in December of 1958. Though the car was used, albeit by the renowned racer Hans Stuck, Elvis knew straight away it was something he had to get his hands on permanently. At the end of his lease, the performer quickly purchased a cherry red 507. He drove the stunning auto exclusively throughout the next year.

Though many vehicles were prized by the King, one stuck out as the most memorable to him personally – his 1973 Stutz Blackhawk III. The King was the first person to buy a Stutz in the United Sattes. In addition, he was the first owner of the Blackhawk model. Elvis adored the 1973 version so much so, that it was the last automobile he drove before passing away in 1977. His Blackhawk III was built on a Pontiac Grand Prix chassis. Further, it was outfitted with 18-karat gold trim. This truly personified the dazzling intrigue of one of the world’s greatest musicians and personalities.

On display at Graceland

Today, this vehicle as well as the rest of the King’s collection can be found at Graceland in Memphis, Tennessee, home to one of the most enduring entertainers in history, and the site of a museum dedicated to his life and legacy. Nearly 600,000 visit the site each year to remember the legend. It not only features the car museum, but a number of other extraordinary exhibits dedicated to the King. If you are heading anywhere near the city of Memphis, you’ll certainly want to make time for a visit.

Want to feel like a king yourself by driving something similar to Elvis Presley? Let us help you find out how easy it is by looking into our PFS Simple Lease options. Also, make sure to visit our News and Events section to view all of the upcoming auctions in your area.