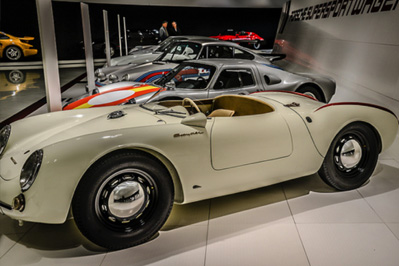 If the falling euro is not reason enough to travel to Europe this year, the Porsche Museum just might offer enough to make sure your passport is current. Be sure to make your reservations before your arrival!  Let’s take a peek at the museum’s history as well as what’s inside this architectural masterpiece.

Located in the Zuffenhausen district of Stuttgart, Germany, the museum lies just outside of the carmaker’s main headquarters. It covers a large swath of land 5,600 square meters in total. Concepts for the museum began in 2003 with the building finally reaching completion in 2009. It cost roughly 100 million euros, well above the 60 million euro estimates. Yet, Porsche enthusiasts agree that it was well worth the wait and the expense.

Previously, Porsche had opened a “rolling museum” in 1976 on a side road adjacent to the Porsche factory, holding about 20 exhibits that were regularly rotated from a collection of 300 restored cars. Ongoing demand from Porsche lovers wanting to view even more of the collection got the ball rolling on the new site.

Viennese architectural firm, Delugan Meissl Associated Architects, was chosen. It was selected out of 170 premier designers from all over Europe to draw up the museum’s plans. Their open and minimalist approach to the design gives the vehicles a proper exhibition. It allows for a proper showcasing of the artistry of Porsche rather than the contemporary features of the structure itself. Today, the Porsche Museum’s interior features over 80 of the carmaker’s finest examples of ingenuity, speed and performance.

The museum’s displays pay homage to the manufacturer’s most beloved, iconic vehicles, which include the 911 (shown above), as well as the 356, 550 and 917. Also included are some of the more exceptional technical accomplishments of the founder himself, Professor Ferdinand Porsche, going back to the carmaker’s beginnings.

A recipient of the German National Prize for Art and Science, Professor Porsche was involved in the production of some of Germany’s most notable military vehicles during WWII, as well as the inventor of the Volkswagen Beetle and Mercedes-Benz SS/SSK. Until his death in 1951, Porsche continued building his legacy as an extraordinary consultant and manufacturer, later being inducted posthumously into the International Motorsports Hall of Fame in 1996. Three years later in 1999 he would be named the Car Engineer of the Century.

The Porsche Museum is open to the public Tuesday through Sunday from 9 a.m.-6 p.m., with the last visitors being admitted at 5:30. The site is closed during the Christmas and New Year’s holidays.  Pricing on tickets varies depending on the number in your party. Design buffs will also enjoy the option of taking an architectural tour of the building itself. So it looks like it is time to get to work on your European itinerary.

Find out how easy it is to get behind the wheel of your own Porsche by looking into our PFS Simple Lease options. Also, make sure you visit our News and Events section to access all of the upcoming auctions in your area.