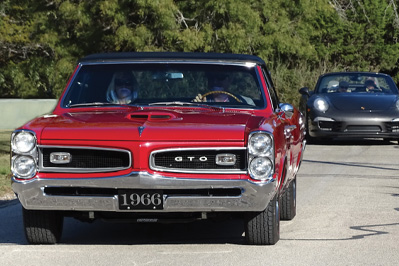 We also enjoyed two Shelby Mustang GT-350s, two Corvette Stingrays, a Pontiac GTO, a Ferrari 330 GT, two 330 GTCs and a 365 GTB/4 Daytona. The most offbeat machine was definitely David Boudreau’s 1967 Jaguar. He had his father’s 420 Sedan not just restored, but resto-modified into the most subtle British Racing Green hot-rod. Very cool. Of course, as always, there was a large group of Porsche 911s.

We started our week with a catered dinner at the McNay Art Museum in San Antonio. A beautiful Spanish Colonial-style mansion built in 1927 for Marion McNay, it was the first modern art museum in Texas when it opened in 1954. Our group was able to tour all the galleries before enjoying dinner in the octagonal central space.

Overnight was at the new JW Marriott San Antonio. This is a hilltop luxury hotel with everything from a world-class Spa. In addition, a 36-hole TPC golf course to a 6 acre water park… not to mention, 1082 rooms. Yes, everything is bigger and better in Texas!

Monday morning, we zipped quickly out of town and into the beautiful Texas Hill Country. We drove spectacular roads—including 335/336/337—known as the Twisted Sisters—before visiting l’art et l’automobile, our good friends Jacques and Karen Vaucher’s automobilia store housed on a 1912 ranch. After Karen’s gourmet lunch, it was off to Horseshoe Bay Resort on the shore of Lake LBJ for dinner and overnight.

Tuesday, we rallied into the heart of the Hill Country, with checkpoints at Boerne, Luckenbach and Fredericksburg. We had a fabulous lunch at Hondo’s in Fredericksburg, before returning to a tasting of Jeff Gordon Cellars wines at the waterfront home of Jim Earsley and Jamie Malloy in Horseshoe Bay before dinner and overnight at the hotel.

Wednesday, we rallied West and North through Castell and Mason, then all the way back to lunch in Lampasas. After lunch, we circled through Burnet, pronounced as in “Burn it, durn it, learn it.”

Driving All Over Texas

Our destination was Canyon of the Eagles, a casual resort by avant garde Lake Flato architects, built of traditional Texas Hill Country materials like native limestone, galvanized metal and rot-resistant local cedar. After dinner, we took advantage of Canyon of the Eagles’ “Black Sky” designation to star gaze through their hilltop astronomical telescopes.

Thursday, we rallied through the morning to the Commemorative Air Force Highland Lakes Squadron, where almost everyone got a photo of their car with a World War II Warbird. Lunch was at Salt Lick, generally acknowledged “Best Barbeque in Texas.” From Salt Lick, we stopped at Gruene, an 1872 town on the National Register of Historic Places, before winding our way back to the JW Marriott for our Cowperson Chic Victory Banquet.

Michael Johnson and Lilly Luong were voted the best-dressed cowboy and cowgirl. David North/Will Kontes, driving David’s Ferrari 330 GTC, were the only team to Zero the rally. With 3 points, Emilio Cabrera and his son, Anthony, were the only other team to come close, driving their Porsche 911. Gary Pace received a special award for brilliantly finishing near the top in all 17 Texas 1000 rallies with his Ferrari 330 GT.

In 2013, thanks to the generosity of artist Bill Neale, Indy 500 Champion Bobby Rahal and our terrific rally friends, Texas 1000 donated $140,000 to Service Dogs, Inc., a Texas-based 501(c)(3) that saves especially intelligent dogs from the pound and trains them as hearing and service dogs. It takes a year and $20,000 to train each dog, but if you’re severely handicapped—for example, a Marine who’s lost his legs thanks to an IED in Iraq—a service dog can literally give you back your life.

This year, Sheri Soltes of Service Dogs, Inc. brought two of “our” dogs and their human partners to dinner during Texas 1000. After pats, doggy kisses and demonstrations of astounding canine helpfulness, who could resist? One of our rallyists, who wishes to remain anonymous, personally matched the whole $140,000 again this year! Two other dog lovers on the rally donated another $2500 to Service Dogs, Inc.

Add $35,700 from Mountain Mille and $14,900 from New England 1000, and we raised $211,000 for charity this year. This brings total contributions to various charities in the U.S. and Canada. This was all since we began Vintage Rallies to just about $2-million. As I like to point out, this is comparable to the charity contributions of most national concours events over the same time period, though we have neither thousands of paying spectators nor multiple sponsors to help out.

Most of our charities are local, like Service Dogs, Incorporated. These groups who spend their money on actually doing good works rather than fund-raising or highly-paid executives. As for Vintage Rallies, Inc., Jean and I cover our expenses and pay our dozen Wranglers for their work during the actual events, but everything that’s left goes to charity and has since 1993.

We would like to thank sponsors and official mechanics, Steve and Peter Markowski of RPM VT. Plus, Tom Meunier of Exotic Car Transport. In addition, we have to thank Mick Pallardy, vice-president of Porsche Cars North America for sponsoring all our rallies. Moreover, for providing Porsche back-up cars if our guests have problems with their vintage rally cars. We also owe our rally friends a huge thank you for their gracious and extemporaneous generosity. Judged by almost any measure, this really was a special year for Texas 1000!