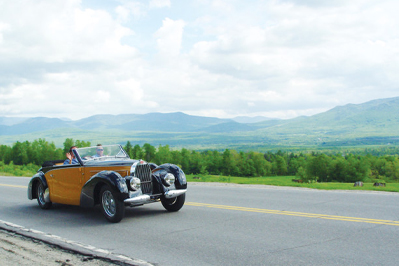 In 1991, writer/racer Rich Taylor and his wife, artist/photographer Jean Constantine, drove a Lancia on Italy’s Mille Miglia Storica to do an article for Town & Country magazine. When they returned, they decided to organize a similar vintage sports car rally in America.

As Taylor explains, “We wanted to be somewhat like the Mille Miglia. But more select, more upscale, less exhausting and a lot more fun. We were determined to have first-class hotels, great restaurants and winding country roads without a lot of crazy Italian traffic. We would limit our event to just 50 cars.”

Their first 1000 mile rally was May, 1993 in Vermont. It drew 23 teams who weren’t quite sure what they’d gotten themselves into. Taylor and his old friend John Fitch, who was the after-dinner speaker at the Victory Banquet, agreed that everyone had a ball and vowed to do it again the next year.  As an added bonus, the rally was able to donate $5000 to a Vermont State Police charity.

Since that first New England 1000, Rich and Jean have now organized 85 vintage rallies across the US. This includes in New England, Texas, Virginia, West Virginia, North Carolina, Florida, Washington, Quebec, Nova Scotia and the Canadian Rockies. They entertain guests from all over North America and Europe. In addition, from as far away as India and Japan. Thousands of enthusiasts have collectively driven over 4 million miles on Vintage Rallies events, while raising $2,000,000 for a long list of charities.

Rich and Jean will put on three different events in 2015, all with the help of a regular crew of a dozen helpers. Sponsors Peter and Stephen Markowski of RPM Vermont are the official mechanics; sponsor Tom Meunier, the president of Exotic Car Transport, joins each rally to help out. Porsche Cars North America is a long-time sponsor and supplies back-up cars if an entrant’s vintage car breaks down.

September 27 through October 2, 2015, Vintage Rallies will hold its first Southwest Passage. This event will start with the prestigious Santa Fe Concorso, then rally 1000 miles through the Four Corners area of Southern Colorado and Utah, visiting everywhere from Taos to Arches National Park, including of course, historic downtown Santa Fe.

The 12th Annual Mountain Mille will be October 25-30, 2015, starting and ending at The Homestead in Hot Springs, Virginia. Each day, the 1000 mile route will drive through a different area of Virginia or West Virginia on terrific mountain roads with no traffic.

Rich and Jean have perfected a winning formula. It combines luxury hotels, gourmet restaurants, unspoiled scenery, and amazing roads. In addition, back-up cars and expert mechanics “just in case”. Plus, an enthusiastic crowd of car lovers they’ve come to think of as their Extended Family Group. If you’ve got a street-legal sports, GT or racing car built 1990 or earlier—or an Exotic sports car of any year—one of these unique Vintage Rallies could become your favorite week of the year.