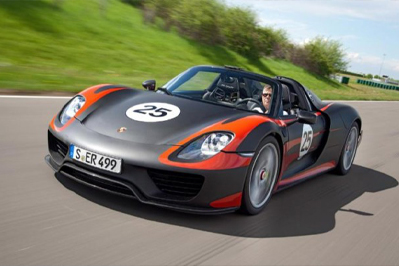 When the unmistakable design and engineering expertise of Porsche come together with state-of-the-art hybrid technology, you know it’s going to be something special.

The Porsche 918 represents the German car company’s first race car designed entry into the hybrid market and they’ve done it in style.  This mid-engine, all-wheel drive, plug-in supercar carries a 7-speed PDK dual-clutch transmission and is powered by a 4.6 liter flat-plane V8 engine producing 608 horsepower, with two electric motors – one each on front and rear axle – delivering an additional 279 horsepower, for a combined output of 887 horsepower.  The 918’s liquid-cooled 6.8 kWh lithium-ion battery pack delivers an all-electric range of 12 miles with total range of approximately 420 miles.  Road testers report, “the 918 doesn’t drive like a technical exercise, but like a fully formed, thoroughly developed and extremely thrilling machine.  It is as engaging to technical intellect as it is to pure instinct.  The state of awe it leaves behind is long-lasting.”

First shown as a concept car at the 80th Geneva Motor Show in March 2010, the production version was unveiled in 2013.  Porsche plans a limited edition of only 918 cars for the 2014 model year.  The model is also available with a Weissach trim package – a high-performance upgrade that includes the deletion of some interior amenities and addition of lighter-weight carbon fiber appointments, magnesium wheels, flame-resistant upholstery, racing belts and aerodynamic aids.  Clearly aimed at the track-going folk.