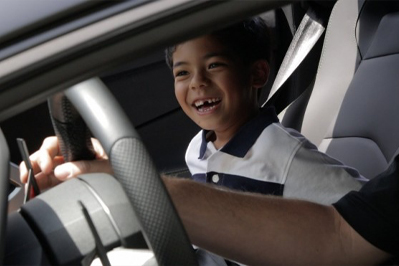 Recently Lamborghini North Los Angeles received a message on their Facebook page from a local father:

“Hi, I’m hoping someone with a kind heart will help me. My Son is 7 on April 20th, we’re having a small party for him. He is a Lamborghini FANATIC. He works hard at school so he get 100% in tests, so I give him $10 which he saves toward his Lamborghini. So far his dream has cost me $400! I know it would be a dream come true for him to be able to sit in a Lamborghini or get a short drive in one. His birthday party is in Hancock Park at our home. Are there any Lamborghini owners who would like to make a 7-year-old believe in dreams?”

Lamborghini North Los Angeles contacted a few of their customers for assistance with giving young Jacob the shock of his life as a fleet of Lamborghinis showed up at his birthday party. Jacob was swept up by the leader of the pack – a matte black 700-horsepower V12 Aventador – and taken for a victory birthday lap around the neighborhood, amid screams of ‘you’re so lucky’ from his friends on the sidewalk.

After the ride, the birthday boy was presented with a special Lamborghini jersey. See the joy of his special wish come true in the video below.