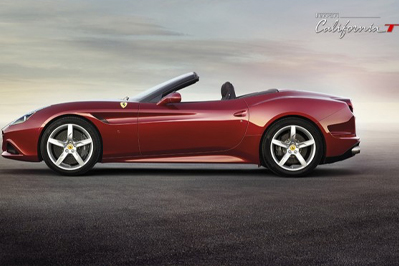 Some say the Ferrari California is the Prancing Horse’s finest embodiment of the carmaker’s three principal characteristics; sporty, elegant and versatile.  And now, Ferrari has added a turbocharger to the California.

The 2015 California T will make its debut at the Geneva International Motor Show, running March 6 – 16, 2014.  The model features a completely new twin-turbocharged direct-injection 3.9-liter V8 engine that is good for 552hp and 556lb-ft of torque. Variable Boost Management (VBM) and low-inertia twin-scroll turbines help keep lag to a minimum, and as a result, Ferrari says the California T can sprint to 62 mph in 3.6 seconds on its way to a top speed of 196 mph.  (They don’t say whether that is with the top up or down.)

Speaking of which, the retractable hard top transforms the California T from a chic coupe to a sleek, sophisticated spider in just 14 seconds.  The overall design was created by the Ferrari Style Centre in collaboration with Pininfarina and while retaining the dimensions of the previous California, the shape of the T’s flanks is inspired by the 250 Testa Rossa’s famous pontoon-fender styling.  An imposing front grille and the intakes for the turbo intercooler communicate a sense of impressive power and width.  Inside, you’ll find a refined semi-aniline leather-trimmed cabin with the modular spaces of the signature 2+ configuration.

Thanks to zero turbo lag and a radical re-engineering of the torque curve, the new engine promises significant improvement in fuel consumption and lower emissions while delivering the driving pleasure one expects from a Ferrari.