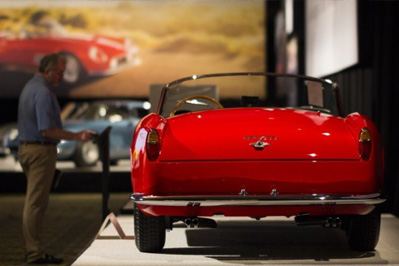 In mid-January, car enthusiasts from around the world gathered in Scottsdale, Arizona to participate in what is becoming the second-largest car event in the United States.  The week is also considered by many to be the defining event for the upcoming year’s market strength, and all indications point to a recovering economy, strong markets, record-breaking sales and bright prospects for 2014.

Representing Premier Financial Services during the Scottsdale auctions were Doug Ewing, Vice President of Sales, Michelle Yancey, Southwest Sales Manager and Juan Garcia, West Coast Sales Manager.  They enjoyed perfect Arizona weather while visiting with customers and dealers from across the country.  They reported auctions packed with prospective buyers and energy in the crowds that promised vigorous bidding and high prices.  Not to disappoint, this year broke all records in total sales for the participating auction houses and set records for highline collector automobiles and mainstream American muscle cars.

But Scottsdale wasn’t all exotics and rare collector automobiles; it’s a showplace for unique custom cars and classic American muscle such as Shelbys, SS Chevelles, 389 GTOs, Corvettes and Camaros.  There is something for everyone in Scottsdale.  If you love all things automotive and the thrill of great auctions, put Scottsdale on your calendar for January 2015.