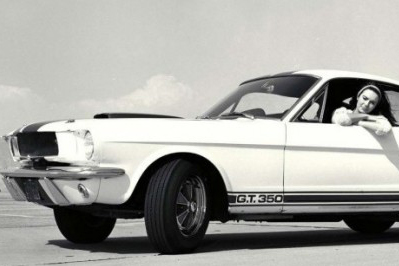 As with all all great underestimations, this was the challenge that led to one of the finest American road racers, ever. Carroll Shelby after great success with building Shelby cars with Ford power was now charged with making a Ford with Shelby power, a challenge he took on with great gusto.

I, like so many of you was influenced in my love affair with automobiles in great part by what was racing the roads of America and perhaps even more importantly what was rumbling through my neighborhood on any given Sunday. When I was a young boy, my father came home with a 1965 Shelby GT350 Mustang, much to the chagrin of my mother as there were her and 2 small children and the car had only 2 seats. This said, my father was not worried as he would drive it as his commuter car when traveling alone and they would use the family wagon when all together, made perfect sense to him, mother tolerated at best.

The car was something! White with loud blue stripes, 2 bucket seats, 4 speed manual transmission, loud exhaust, squeaky brakes, a perfect doctors car! It was 1966, I was 6 years old and I was about to embark on my first love affair with an inanimate object. When I would hear the car coming I would race to the door to see it speeding toward the house, there was no more glorious moment. Sundays we would go out for a spirited drive and sometimes my father would even race with other cars, and win, it was unbelievable. This is where the hobby started for me and it is no different today for the countless young people around the globe.

There is a reason why the early Shelby Mustang based cars are so desirable, from the nuts and bolts modifications Carroll masterfully engineered to the more esoteric and visceral such as noise,smells and sensations the GT350 had it all. Starting with a stock Mustang, Shelby tweaked the car by adding a massaged Hipo 289 moving it from 271hp to 306hp in Shelby trim, 4 speed synchro transmission encased in an aluminum housing, Koni shocks all around, thick anti sway bars, side exit exhaust with free flow mufflers and wide tires, this car could accelerate with the best, corner and stop as well. New this beast cost $3,900, for an additional $1,500 you could option the car to go racing, and it could win right off the showroom floor.

Today of course, the values of Shelby Mustangs, much like the value of all great cars from our past has grown immensely. The basic 1965 GT350’s have traded for 100 times more than they cost new, the rarer “R” model 300 times it’s original MSRP, these are real cars  fraught with real race history, I think they are an incredible value when you look at the likes of Ferrari, Maserati, and many other European brands of the day. They went into the arena an unknown and earned there way to the top earning the “B” production championship in it’s first year competing.

Car and Driver said it best back in 1965…”In all honesty, it cannot be said that the GT350 is the sort of car a sane man would enjoy driving at all times and under all conditions, but when you do get out on the open road and the wind is at your back, it is in fact the closest thing to a real racing car that one is likely to find on the public roads.Not a lady’s car by any stretch of the imagination; probably not even a gentleman’s car for that matter; but surely a man’s car, in the tradition of the Blower Bentley or Allard Cadillac, and in this day and age any car one’s wife would refuse to drive is a pearl beyond price.