Take a Road Trip to The Sarasota Classic Car Museum 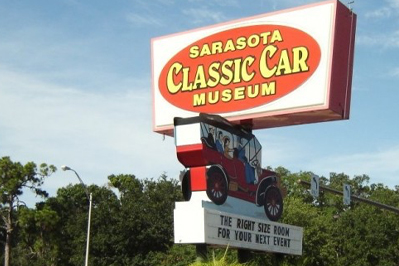 As farm equipment salesmen in the 1940s, Herbert and Bob Horn visited a lot of family farms and often saw neglected automobiles languishing in barns and fields. They had the presence of mind to purchase what they could and restore those cars to “showroom condition.”

By the 1950s, the brothers had collected and restored over 70 cars including an 1897 Duryea Buggyaut. They needed a space that complemented their collection and they found it in Sarasota, Florida, an up and coming tourist destination.

“Horns’ Cars of Yesterday” opened in March 1953 and has been operating as a car museum ever since. The website boasts that the museum presents “the alphabet of the world’s foremost automobile manufacturers” beginning with Alfa Romeo, Bentley, Cadillac, DeLorean, Edsel, Ferrari, etc. Visitors can appreciate the Rolls Royce collection of circus magnate John Ringling and his wife Mabel, while Beatles’ fans can gaze at John Lennon’s 1965 Mercedes Benz and psychedelic Bentley and Paul McCartney’s Mini Cooper.

In 1967, ownership of the museum passed from the Horns to Walter Bellm, a prominent businessman and car collector. Thirty years later, Martin Godbey purchased the museum, expanded the collection and renovated the 50,000 square foot building, adding an exotic sports car collection—including a Don Garlits dragster—and many American classics, adding Buicks, Chryslers, Fords, Pontiacs, Studebakers and more to the alphabet of automobiles on display.

In addition to cars, the museum houses a collection of unusual bicycles, velocipedes and early motorcycles, antique games and a music box arcade that features a 1870s juke box.