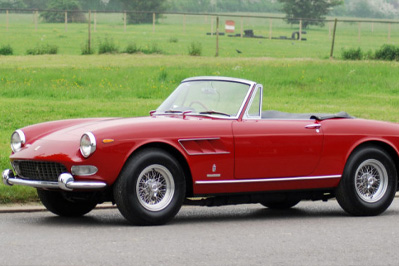 This was my experience with the Ferrari 275 GTS. First romance, date, and crush all rolled into one.

In 1987 I was onto my second Aston Martin DB4 and first Ferrari 246 GT Dino. Both cars were fun and wildly different in every way, thoroughly enjoyable.  I wasn’t lusting after anything else and was completely content with my two-car collection, until I drove a dark blue Ferrari 275 GTS. These cars were always expensive and rare, but that exhaust note and ease of how the car went down the road was amazing. Instantly the Dino was now slow and the DB4 was ponderous.  That logic wasn’t really helpful, as I realized I couldn’t afford a third car and wondered how to bridge this cost!

Jumping ahead fifteen years, I found myself writing about these cars for Keith Martin and Sports Car Market Magazine. The usual prose in the auction catalogs would go something like this:

Ferrari introduced the 275 GTS at the October 1964 Paris Show alongside its sibling, the 275GTB. The two shared the same chassis and driveline, Ferrari’s first production car with all-independent suspension.

Although both cars were designed by Pininfarina the berlinetta bodies were built by Scaglietti while the spyders came from Pininfarina’s own new factory and were visually very distinct. The 275 GTS’s design is frequently described as “harmonious,” often elaborated with “compact,” and it remains as one of the best integrated and most pleasing designs ever to grace a Ferrari chassis. There was no mistaking that it was a Ferrari, either, and the power and superb road holding of its engine and chassis were amply expressed in Pininfarina’s eloquent but subtle design. (This was edited by David Gooding & Co.)

The catalog descriptions would almost be damning praise. Great car, not the most exciting design, but a well-sorted example is still exciting to drive. I hadn’t effectively given up trying to recreate that first date with the 275 GTS, but none of the cars I wrote about or sold had that certain feel and I couldn’t put my finger on it.

We all love cars for a variety of different reasons and the 275 GTS has two great virtues that prove to me it is a stand-out machine. It can used for either daily commutes or extended rallying . It is the best-balanced, open V12 Ferrari that money under $1 million can buy.  California Spyders are iconic and more beautiful, the 330 GTS and Daytona Spyder were produced in fewer numbers, but I find the 275 GTS as the better buy and certainly an easier V12 to roll with when under 75 mph. Oddly, it is the anomaly of open Ferraris in pricing – it is priced below the 275 GTB!

The open-air car, although not as glamorous and masculine as the Coupe, is certainly as much fun to drive in real-life driving conditions. I’ve taken mine on the Copperstate 1000 and have had the pleasure of ripping through the Rockies, into the Nevada desert, and then over in Lake Tahoe on another rally. I knew this car was a keeper after it performed flawlessly in 100 degree heat for a solid hour over a 100 mile burst. That was better than the initial drive in 1987.