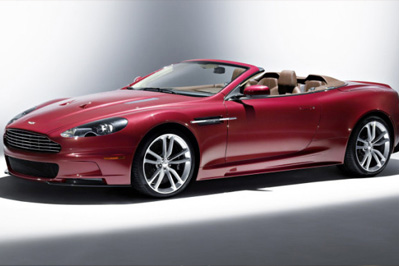 It’s Fast, It Looks Good, and the Top Goes Down.

The DBS Volante is top of the line and exists in its own super-exclusive sphere, a classic drop top front-engine V-12 sports car. Exuding power and aesthetic appeal, this is a car that eschews styling gimmicks and relies on the classic formula of beautiful proportions.

At top speeds near 190 mph and an expected 0-to-60 mph in 4.3 seconds according to Aston Martin, the DBS Volante is best savored at cruising speeds with the bark of the exhaust as background music. An aural delight, the DBS Volante’s ride is firm but never abusive and is satisfyingly responsive. The huge brakes bring everything to a halt with eye-popping capability. There’s no fade or squealing, just smooth, solid feedback through the pedal.

Designed from the onset with open-air motoring in mind, the roof can be raised or lowered in 14 seconds at speeds of up to 30 mph. With the top down, it’s one of the most indulgent tanning salons on the planet. The interior is equally highbrow. The knobs on the dash are machined from solid aluminum, and leather covers nearly everything that isn’t made of carbon fiber

At $286,400 to start, the Volante adds more than 10 grand to the sticker of the DBS coupe, and, of course, that figure will quickly bloat if you want yours personalized. But let’s be honest: Something this artful really is priceless.