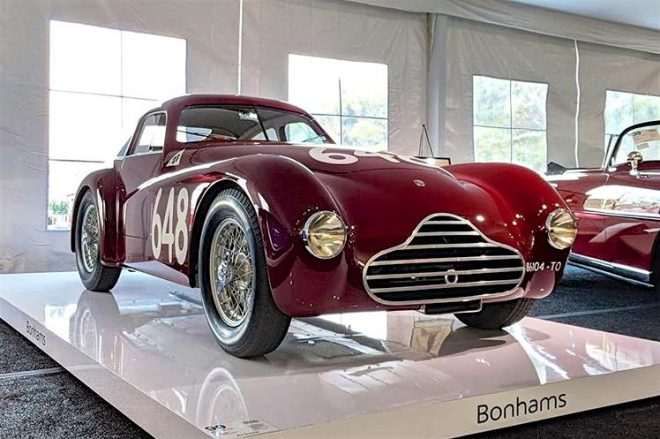 With its dry, mild winter climate and stunning natural beauty, Scottsdale, Arizona and its surrounding areas are a natural choice for a great winter getaway. The location provides the perfect environment for enjoyment of collector cars. Returning for the 9thedition of The Scottsdale Auction, Bonhams will lift the gavel on 110 collector cars spanning automotive history from 1901 to 2009 at the Westin Kierland Resort & Spa on January 16th.  Among Bonhams’ pre- and postwar greats offered for sale, the featured vehicles are 16 vehicles from the Philip Reed Collection. This includes such diverse marques as Boyer, Buick, Chevrolet, Ford, MG, REO, Rolls-Royce, Studebaker, Willys and Winton.

Of course, the leasing experts from Premier Financial Services will be there on the ground at The Scottsdale Auction, ready to help you finance the collector vehicle of your dreams. Here is a sampling of our favorite offerings from the Bonhams auction docket. 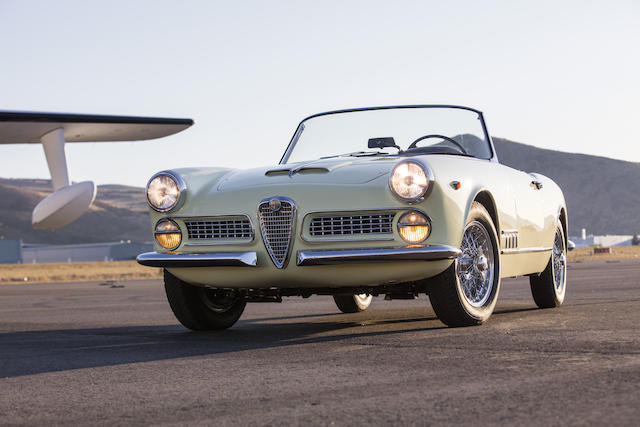 Keith Neelans, our Northeast Sales Manager, has selected the 1960 Alfa Romeo 2000 Spider, Lot 19. Bodied by Carrozzeria Touring, the 2000 Spider debuted for 1958. It was branded as Alfa Romeo’s flagship open touring car and continued in production to 1962. More luxurious and sophisticated overall than the smaller 1,300-cc Giulietta Spider, the 2000 Spider was a true open GT-class car. It is capable of comfortable long-distance cruising beyond 100 mph. In total, fewer than 3,500 were produced. At it’s inception, the 2000 Spider was an ideal automotive accessory for the era’s top luminaries. In fact, Audrey Hepburn and first husband Mel Ferrer drove one. Furthermore, the car was purchased new in Europe by an American who whose career included a stint at NASA. This Alfa includes numerous specially-ordered original features. Its provenance includes more than 30 years’ storage before it was totally restored to impressive standards in 2018-19.

A rare and striking Italian GT car with excellent driving dynamics and enduring style, this 1960 Alfa Romeo 2000 Spider marks an uncommon and highly refreshing find in today’s collector-vehicle marketplace that is now finding its own among wise collectors.

This auction season, Michelle Yancey, Premier Financial Services’ Southwest Sales Manager, is keeping a close eye on not one, but two 1948 Packard Series 22 Station Sedans offered by Bonhams at Scottsdale. Based on Packard’s upmarket Super Eight chassis, the Station Sedan was a high-quality, high-style model. It was briefly produced from 1948 to 1950.

Finished in Seafoam Green, Lot 79 was awarded Best in Class at the 2016 Hilton Head Concours d’Elegance and features power delivered by Packard’s extremely durable 288 CI inline 8-cylinder engine and a 3-speed manual transmission with desirable overdrive on demand for relaxed cruising. Sharing the same drivetrain, Lot 34 is a highly original example with provenance including nearly four decades with the original owner. The vehicle is also a recipient of the Packard Circle of Champions Award. It is a wonderful example of these upscale automobiles of the immediate postwar era that are only recently attracting the attention of astute collectors who also enjoy touring with friends and family.

A 1938 BMW 328 Roadster, Lot 22, has attracted the attention of Southeast Sales Manager Chris Warren. The BMW features a sophisticated chassis design, advanced and powerful 2.0-liter OHV six-cylinder engine with triple carburetors. The 328 was clothed in elemental roadster bodywork and chalked up an impressive victory tally in competition.

It also stands as one of the finest road cars of the immediate prewar years. The 328 engine also re-emerged in Britain after WW II. It came back as the Bristol, the preferred engine choice for numerous cars including the AC Ace. Purchased new by a resident of Zagreb, Yugoslavia, this example was restored in Germany during the 1990s. During this time, with the damaged original engine rebuilt using a correct replacement cylinder block. Following completion, the 328 was featured in the book, “BMW: The Car That Stands Apart”. In the early 2000s, an American enthusiast purchased the BMW and had it prepared for vintage racing. This includes a full competition-spec engine, fuel cell, roll bar and lightened wheels. One of the most iconic cars of the entire 20thCentury, it carries outstanding event eligibility for the next owner. 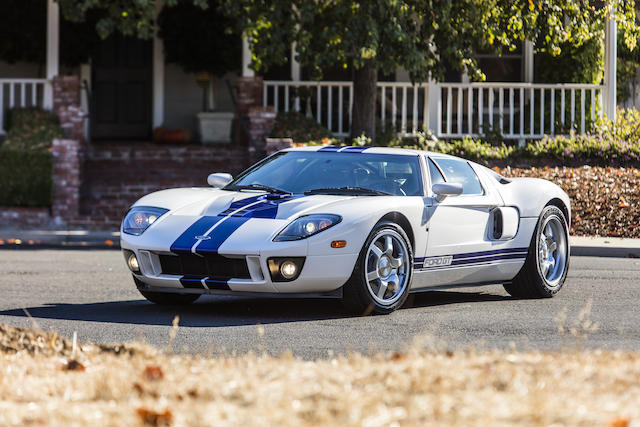 Lot 17, a 2005 Ford GT, is the pick of the offerings from Bonhams for Juan Garcia, Premier Financial Services’ West Coast Sales Manager. It was designed and developed to celebrate Ford Motor Company’s centennial era. Plus, commemorate the GT40’s Le Mans dominance during the last half of the 1960s. The road-going Ford GT was a technical tour de force with supercharged V-8 power and 205 mph available on command. The Ford GT offered by Bonhams at Scottsdale is a particularly collector-worthy example. It has sole ownership and fewer than 1,800 miles of use from new. Options include painted Le Mans stripes, BBS lightweight forged aluminum wheels and audiophile-quality McIntosh stereo system with CD player. Far more than a design throwback, the 2005-06 Ford GT has now truly come into its own as a collector car and now is the time to purchase a prime example. 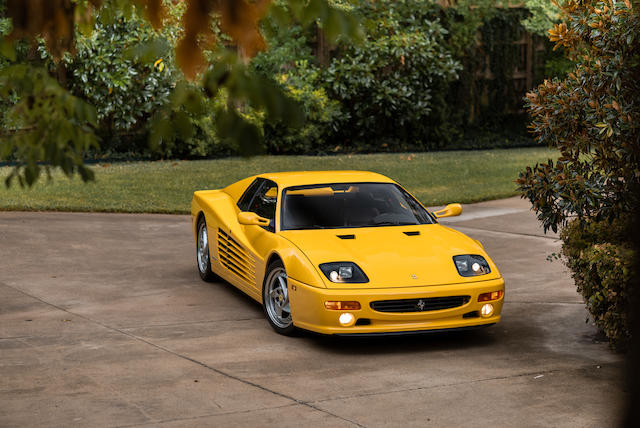 The pick of Premier’s Midwest Sales Manager Ross Dressel, Lot 5 is a 1995 Ferrari F512M – the ultimate development of the iconic Pininfarina-designed Testarossa. This Ferrari is distinguished from its forebear by numerous cosmetic updates. The 512M featured fixed lamps beneath clear covers and a reduction in front-grille area. Furthermore, it includes newly rounded taillamps and three-piece modular wheels fitted. Durability was furthered with titanium connecting rods. Only 501 examples were produced in all, with just 75 allocated for the US market. Refreshingly finished in Fly Yellow over Black leather, this 512M was first registered in California. As stated in the auction description, it has accumulated under 25,000 indicated miles. While capable of ferocious performance levels, the Testarossa and particularly the 512M are potent yet remarkably user-friendly supercars, making them ideal for continued enjoyment today. 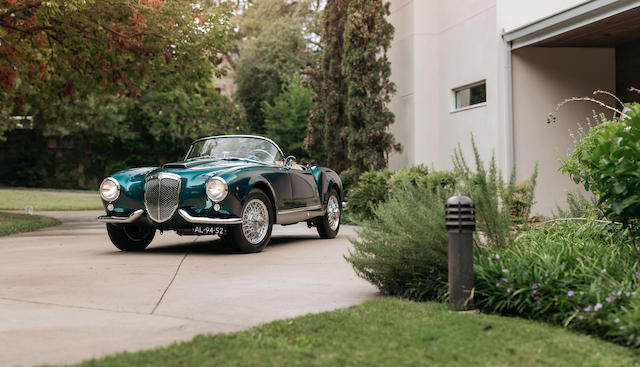 Premier’s corporate headquarters in Woodbury, Connecticut is collectively watching this 1955 Lancia B24S Spider America, crossing the Bonhams auction stage as Lot 28. Featuring elemental, yet achingly beautiful bodywork by Pinin Farina, this example is one of 240 B24 Spiders produced. It is one of only 181 “Sinistra” left-hand drive cars built. The car is powered by Lancia’s 2,451 cc all-alloy, overhead-valve V-6 engine. This engine develops 130 bhp in concert with a 4-speed manual transaxle. Due to this, the Spider delivered exceptional performance and balanced driving dynamics.

Among its many details are the absence of external door handles and a fashionable wraparound windshield. Additionally, a split bumpers front and rear and gently curving body panels. Finished in correct Lancia Verde Ascot Metallic paint, this B24S  is enhanced by a cockpit trimmed in Biscuit leather upholstery. It even features and a rare set of optional Borrani wire-spoke wheels. Sold new in the United States, this Spider America eventually returned to its Italian homeland, where it was professionally restored. It was sold to the US in 2009 and selectively refurbished as required. With two editions of both the Colorado Grand and Copperstate 1000 to its credit, this wonderful and rare classic Lancia is proven and ready to show and enjoy con brio! 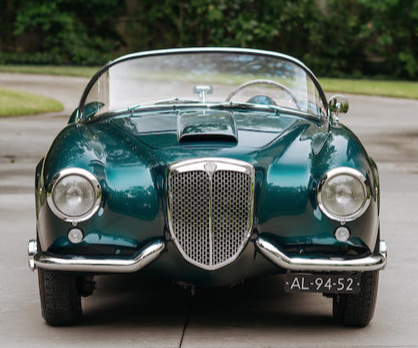 Given the wide selection of desirable collector vehicles offered by Bonhams at The Scottsdale Auction, competition among bidders is anticipated to be fierce. Contact Premier Financial Services today to see how our easy pre-approval process can take the stress out of preparing for bidding and allow you to focus on the action. Regardless of whether you’re looking for a new exotic car, highline luxury model or iconic classic, the Simple Lease from Premier Financial Services can help turn a dream into a dream garage. Be sure to brush up on our Auctions 101 post before setting off and enjoy the Scottsdale experience to the fullest with us!