Many years from now, should you find yourself on a SpaceX mission to Mars, keep an eye out the window for an object that looks like a small sports car perched on the nose of what looks like part of a rocket.

That would be the personal Tesla Roadster of Tesla and SpaceX founder Elon Musk, and, like some weird hood ornament, it’s still attached to the upper stage of the SpaceX Falcon Heavy rocket that took it into space. While it might be possible and even cool, in a Star-Trekky kind of way, to one day salvage the cosmic Tesla, you could put one of these landmark machines in your garage sooner and far more easily. 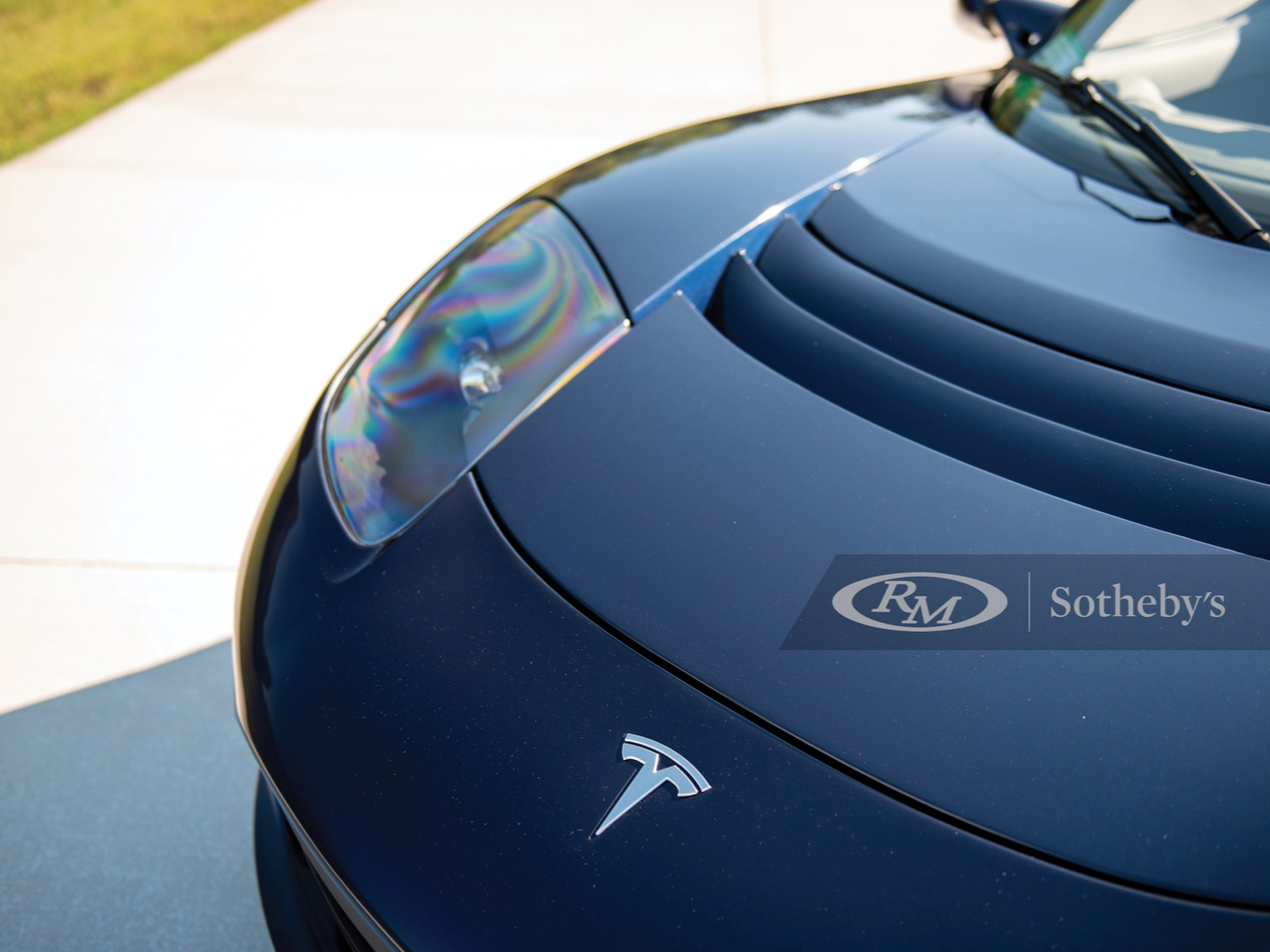 While Tesla has become synonymous with electric luxury cars and SUVs, there were plenty of doubters when the company launched its first model, known simply as the Roadster, 12 years ago. Indeed, the Roadster was never intended to be a volume vehicle. The goal was to draw the attention of well-heeled drivers and investors and at the same time dispel the notion that an EV had to be some wonky looking, boring appliance.

There were more than a few naysayers who thought sports cars should make ‘vroom-vroom’ sounds, not the whine of an electric motor. The Tesla Roadster soon showed its taillights to most of them, with 0-60 in under 4 seconds. The Tesla Roadster made EVs cool.

Just three years later, after selling 2,450 of its Roadsters worldwide, Tesla pulled the plug, so to speak. The reason was simply to move to mass production of the Model S luxury sedan. A new Tesla Roadster is currently in the works, one the company promises will fly from 0-60 in less than 2 seconds. Plus, Tesla claims it should top out at 250 mph and go 600 miles on a charge. 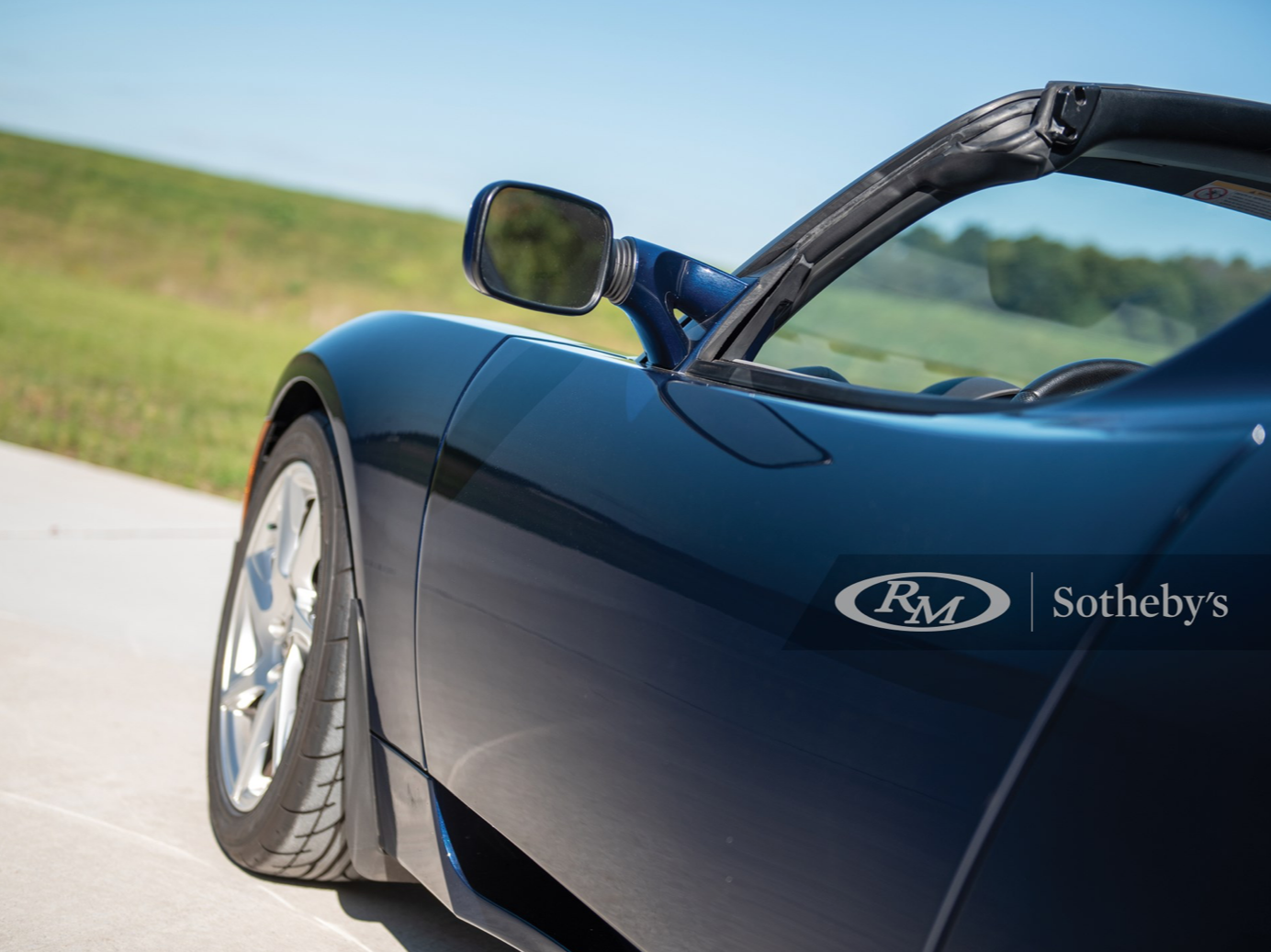 Tesla Motors emerged in 2003, founded by Martin Eberhard and Marc Tarpenning. The two had plans to produce a small electric roadster called the Tzero. They adopted the name from Nikola Tesla, the electrical genius/mad scientist who gave us alternating current.

Elon Musk, the South African-born entrepreneur who backed what became PayPal and then founded SpaceX, became a major investor in Tesla Motors. He basically took over after overseeing development of the production Roadster. It turns out, developing and building a new sports car from scratch is much easier if you start with an existing car.

Musk turned to Lotus for its tiny mid-engine Elise. Tesla would eventually claim a mere 6-percent overlap with the little Brit. For example, the Tesla Roadster’s entire body is made from carbon fiber versus heavier fiberglass on the Elise. Lotus assembled the basic body shell for Tesla. Final assembly, including installation of the powertrain, was completed in Menlo Park, CA for U.S. cars, and in Hethel, England near Lotus for European markets. 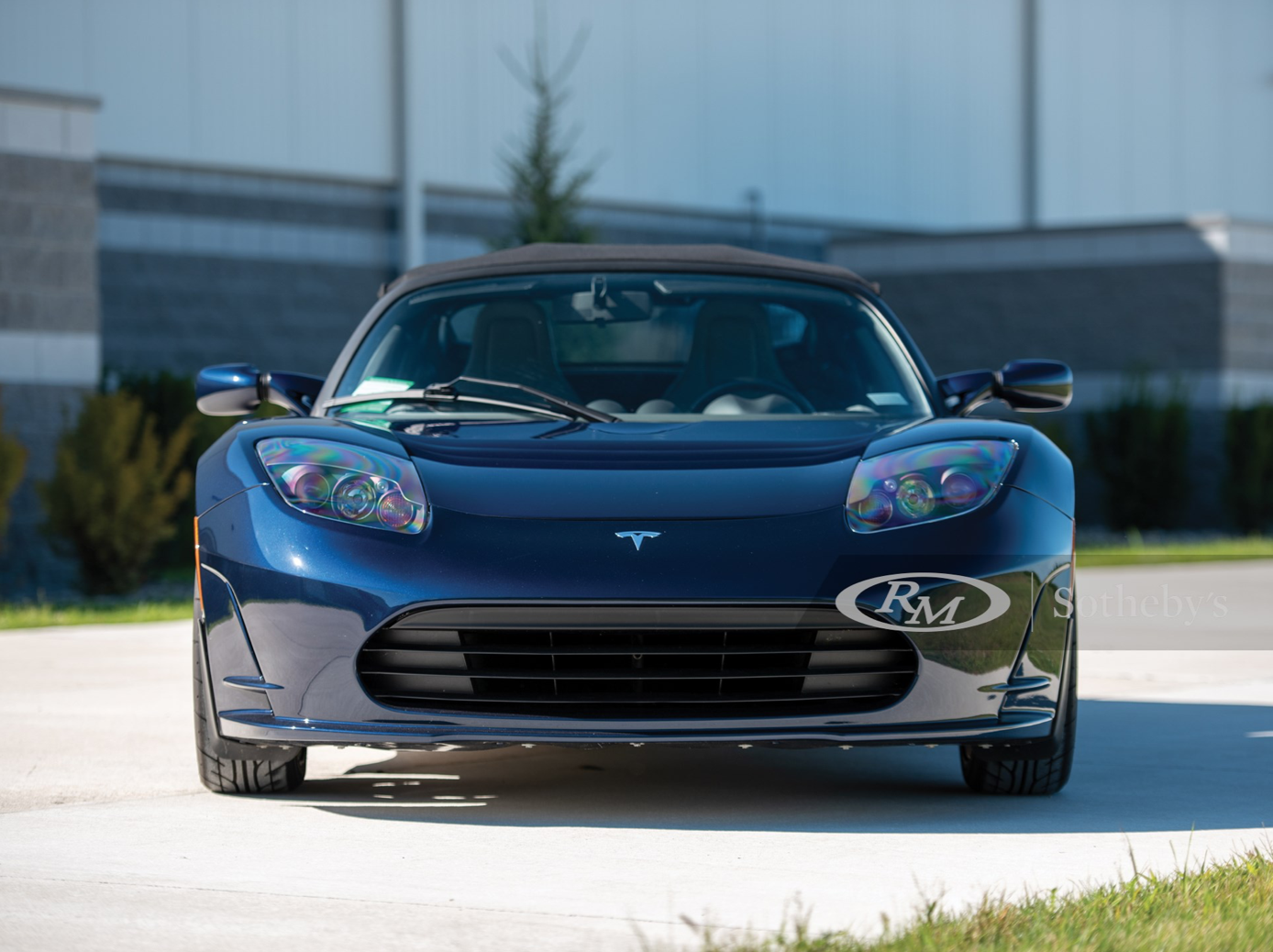 Because the Lotus Elise was so light to begin with, replacing its Toyota-sourced 4-cylinder engine and 6-speed transmission with an electric motor and 1,000 pounds of lithium-ion batteries brought weight to about 2,800 pounds. That was still lighter than a Porsche Boxster. The Tesla’s electric motor made 248 horsepower and about 280 lb-ft of torque, modest numbers by today’s EV standards. But then, the car was super-light by EV standards.

“There’s no wheelspin, axle tramp, shutter, jutter, smoke whiff, cowl shake, nothing. I’m being eerily teleported down the barrel of a rail gun, head pulled back by a hard, steady acceleration. Bizarre. And before too long, profoundly humbling to just about any rumbling Ferrari or Porsche that makes the mistake of pulling up next to a silent Tesla Roadster at a stoplight.” 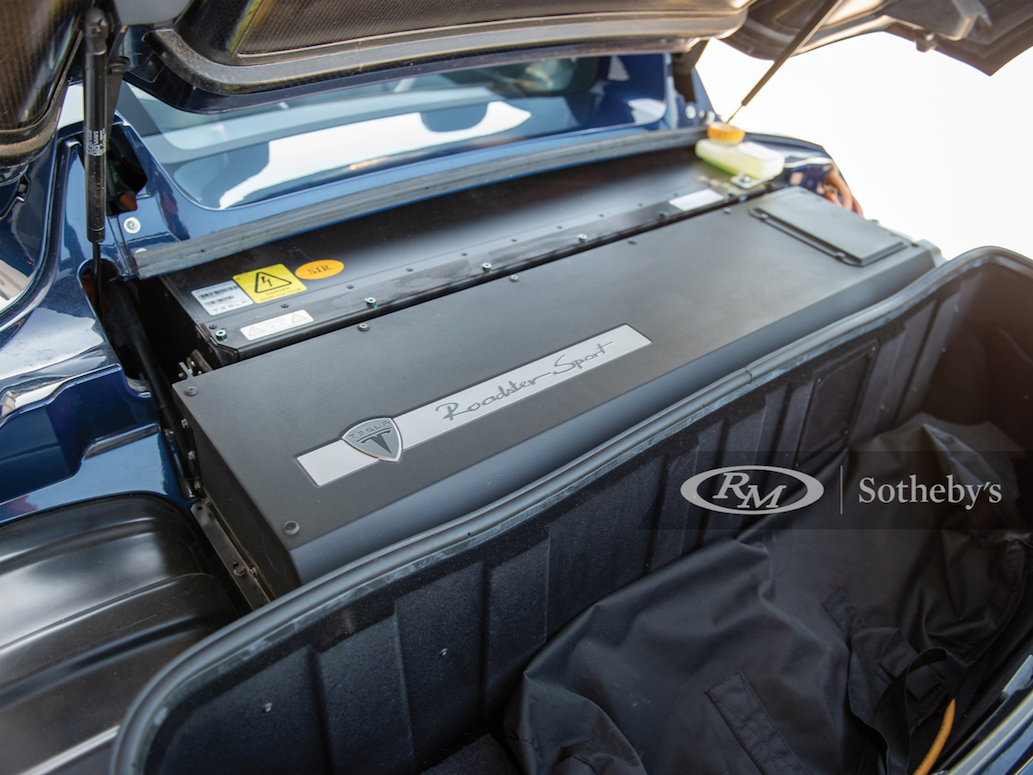 The Tesla Roadster’s original $110,000 starting of price raised some eyebrows. It would go on to climb beyond $150,000 with later versions and upgrades. Buyers were already accustomed to spending more than that on exclusive sports cars; Musk knew his market. Like software, updates were identified as 1.5, 2.0 and 2.5 models. All had a 53 kwh battery. In 2011, Tesla ended the run with an even quicker Sport model featuring a 288-hp motor and special styling.

Three years after production ended, owners could purchase the R80 3.0 upgrade for $29,000 and get an 80 kwh battery pack good for 300+ miles of range. The Roadster offered by RM Sotheby’s from the Elkhart Collection got that upgrade in 2017. 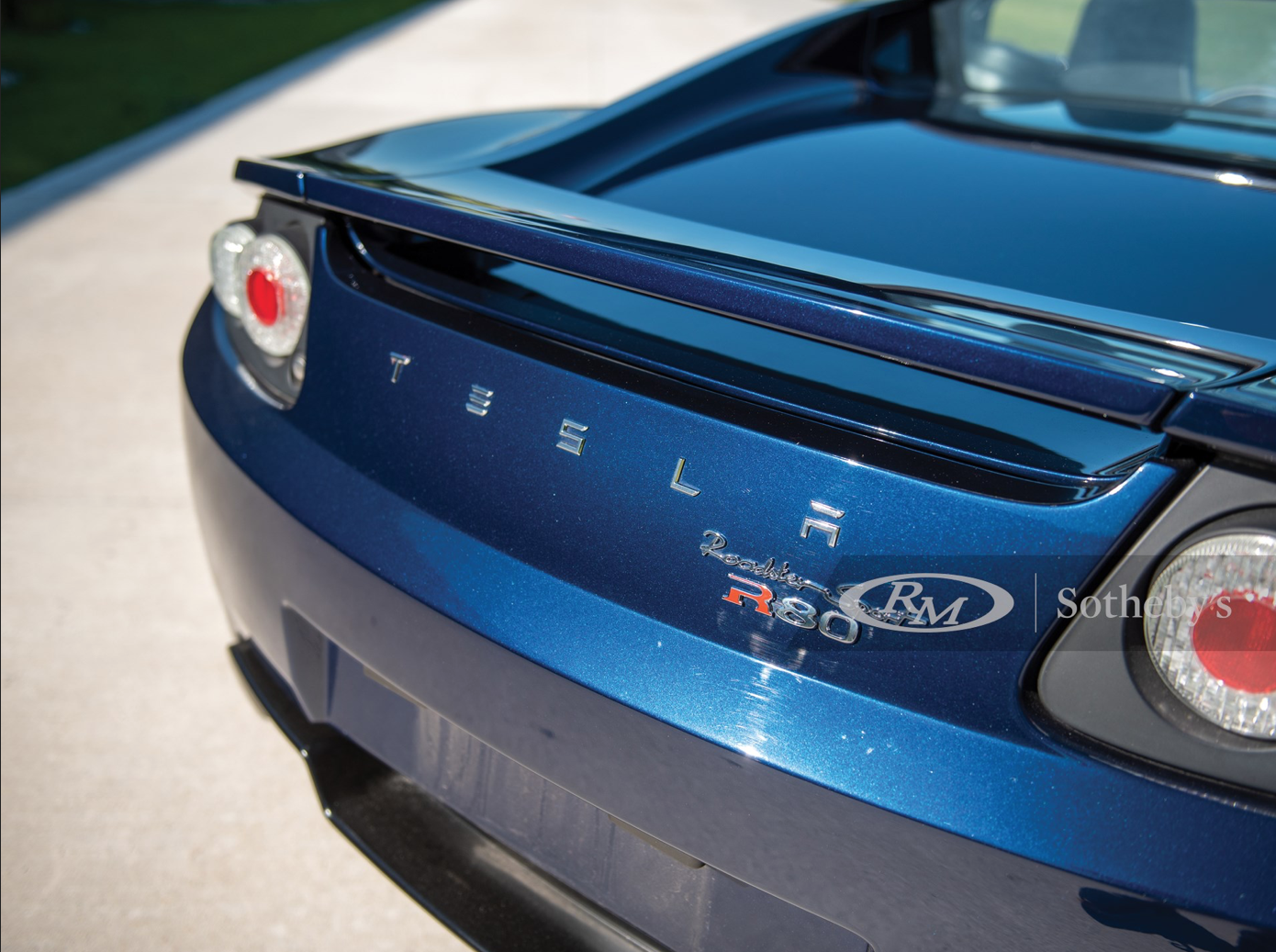 Musk was proven right: There is a market for electric sports cars. The Porsche Taycan recently became the marque’s third-best-selling vehicle in the U.S., and the Maserati MC20 will be offered in both gas and pure EV versions.

As for the Tesla Roadster that made it into space, it entered an elliptical orbit around the sun that takes it into the asteroid belt between Mars and Jupiter. On October 7, 2020, the Roadster, which has a spacesuit-clad dummy named “Starman” at the wheel, came within 4.5 million miles of the red planet– a “flyby” in NASA terms.

If you plan to acquire the Elkhart Collection’s Tesla Roadster with a lease from Premier Financial Services, please note that sending it into space would be frowned upon. 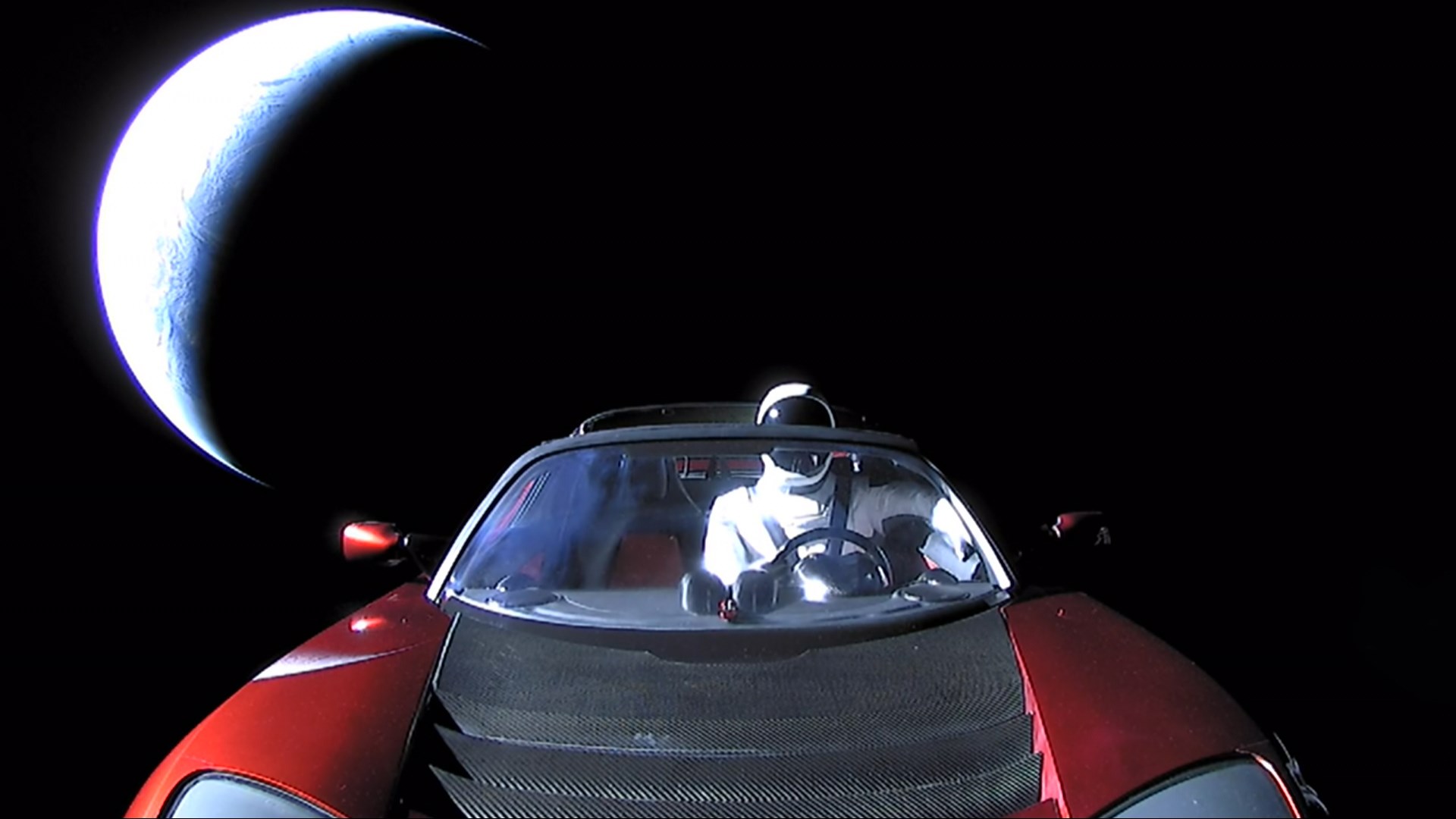