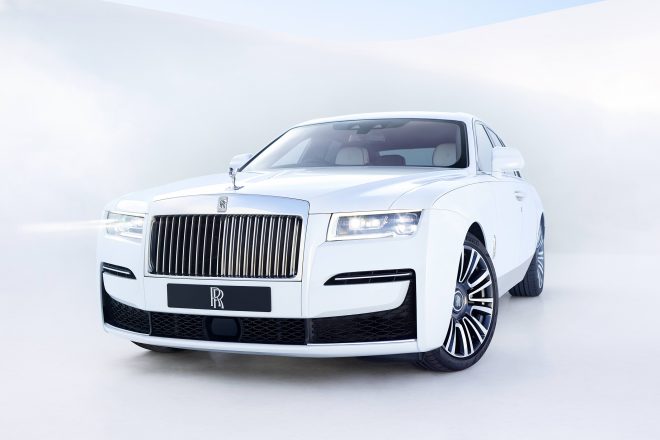 The official media kit for the all-new 2021 Rolls-Royce Ghost declares that the new model “reflects an evolved appreciation of luxury, one defined by minimalism and purity, but underpinned by great substance.” You certainly can’t miss the substance. But how you read “minimalism” depends on your own definition.

True minimalists might take issue with shining 20 LEDs over the grille to give the car an “ethereal front-end character”. On the other hand, those who relish lavishness might say using just 20 LEDs instead of 40 should be applauded as a nod to simplicity.

Kidding aside, Rolls-Royce – no surprise – has produced a truly spectacular automobile here, or “motorcar” in the vernacular of a vehicle that starts at $332,500. The original Ghost was well liked over its decade run; the new one will remind you of how 10+ years of luxury progress can transform a car. 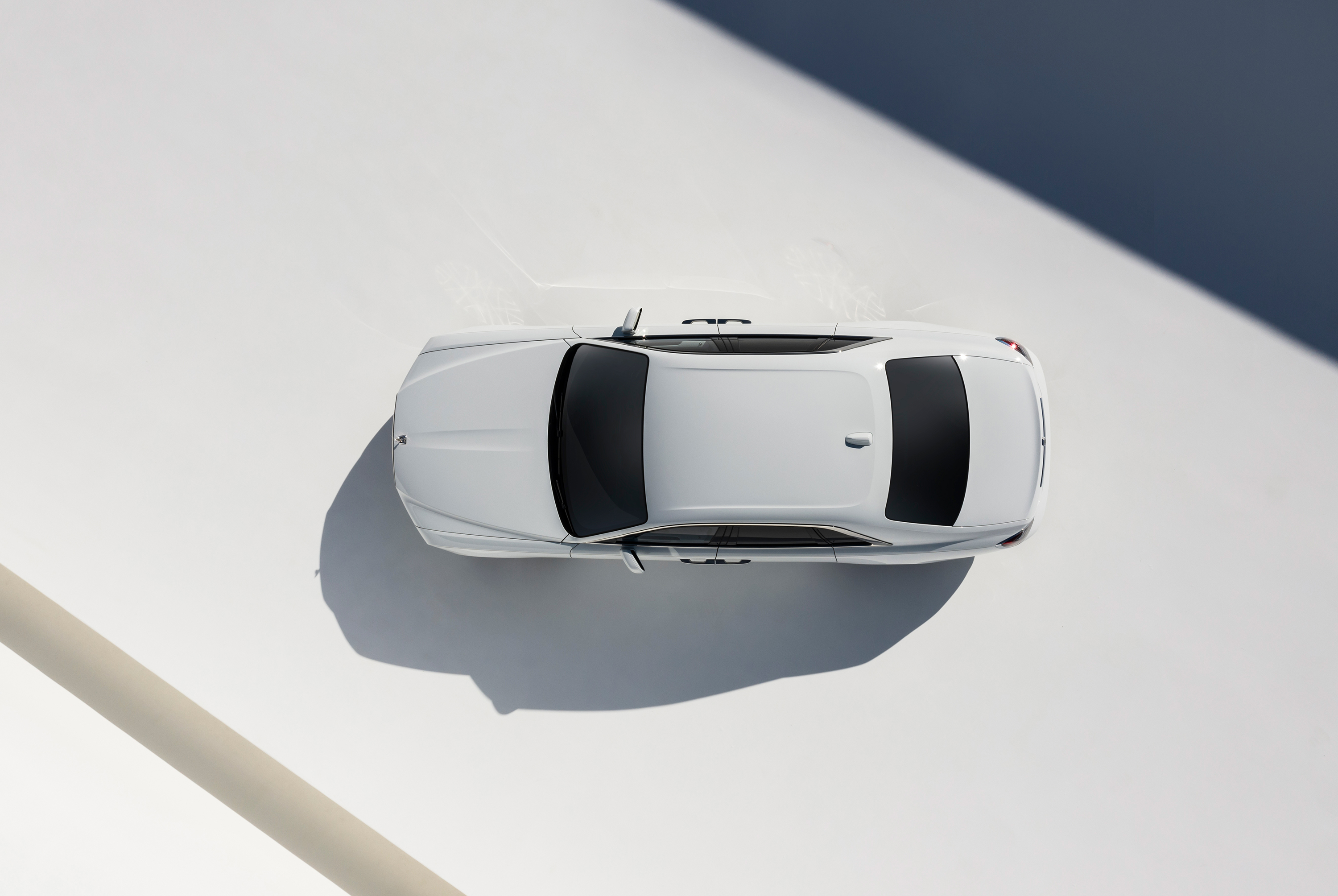 Where Rolls made the second-gen Phantom look more Daddy Warbucks than even the first version, its designers found a way to make the second-gen Ghost look more ghostly without going full glam. According to Rolls, the general design guideline was to make the exterior look like a metal canvas stretched over its chassis. (Use your imagination.) The grille is larger than first Ghost’s but remains more restrained than that of the larger Phantom.

When Rolls talks about substance in the 2021 Ghost, it’s not kidding. The new model puts 5,628 pounds of it on the pavement, distributed 50:50 front and rear. That’s just a 130 pounds or so more than the previous Ghost, and indeed there is more car here. In addition to being a few inches longer and an inch wider, the 2021 Ghost comes with all-wheel drive and rear-wheel steering. 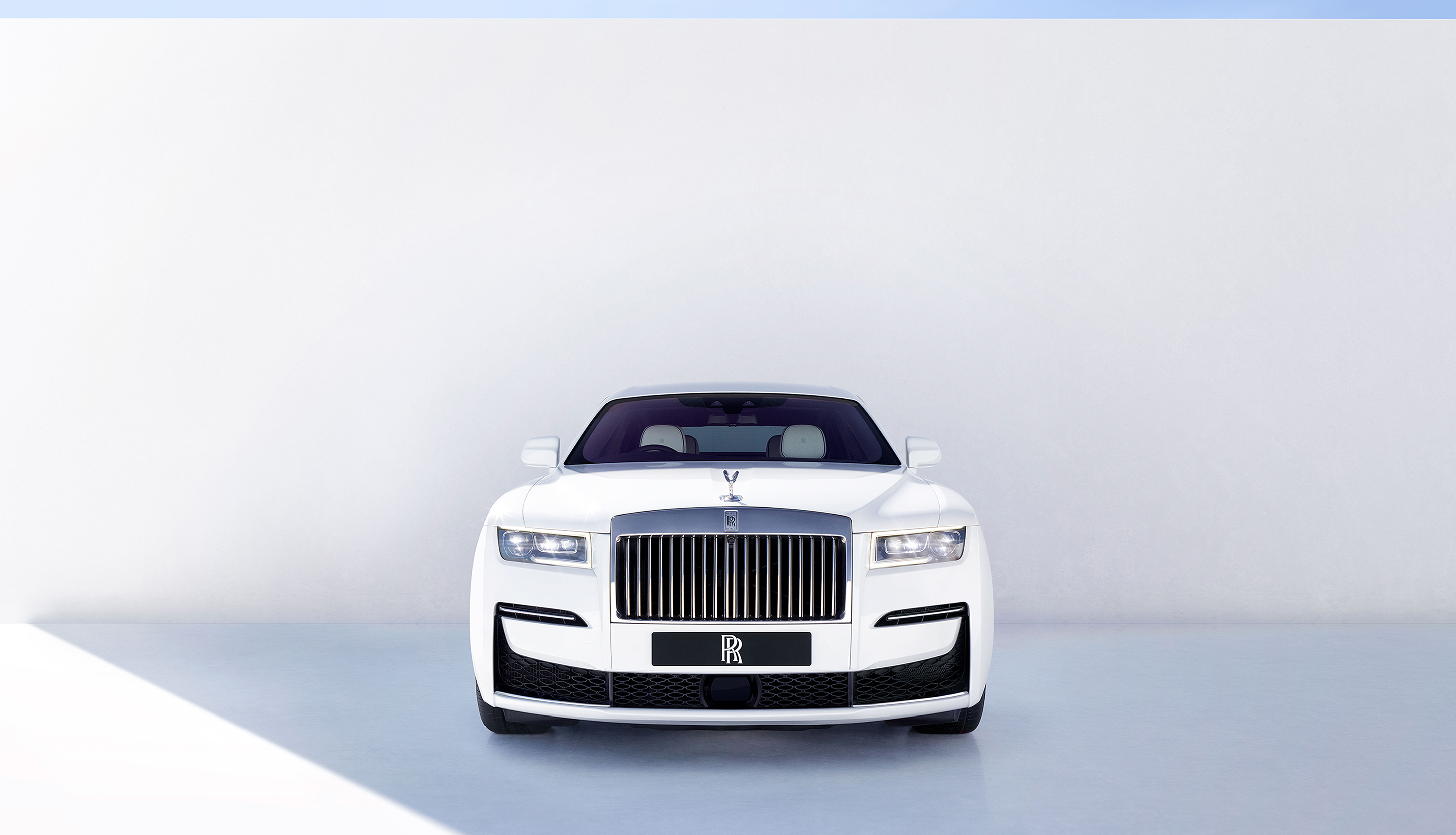 The first-generation Rolls-Royce Ghost was derived from BMW 7 Series bones and mechanicals. While the new Ghost continues with its BMW-based twin-turbo V12 engine, the chassis is now purely Rolls-Royce. The marque’s proprietary aluminum spaceframe architecture underpinning the new Ghost also provides the foundations for the current Phantom and Cullinan.

The 6.75-liter V12 remains a potent yet polished gem. It turns out the same 563 horsepower and 627 lb-ft of torque as in the previous Ghost. Yet, it’s even quieter than before.

It’s doubtful that many Rolls buffs feel wistful for the days when the marque expressed engine output as “adequate” and pish-poshed performance talk. Today, Rolls happily flaunts such figures, including 0-60 acceleration in 4.6 seconds and top speed of 155 mph. 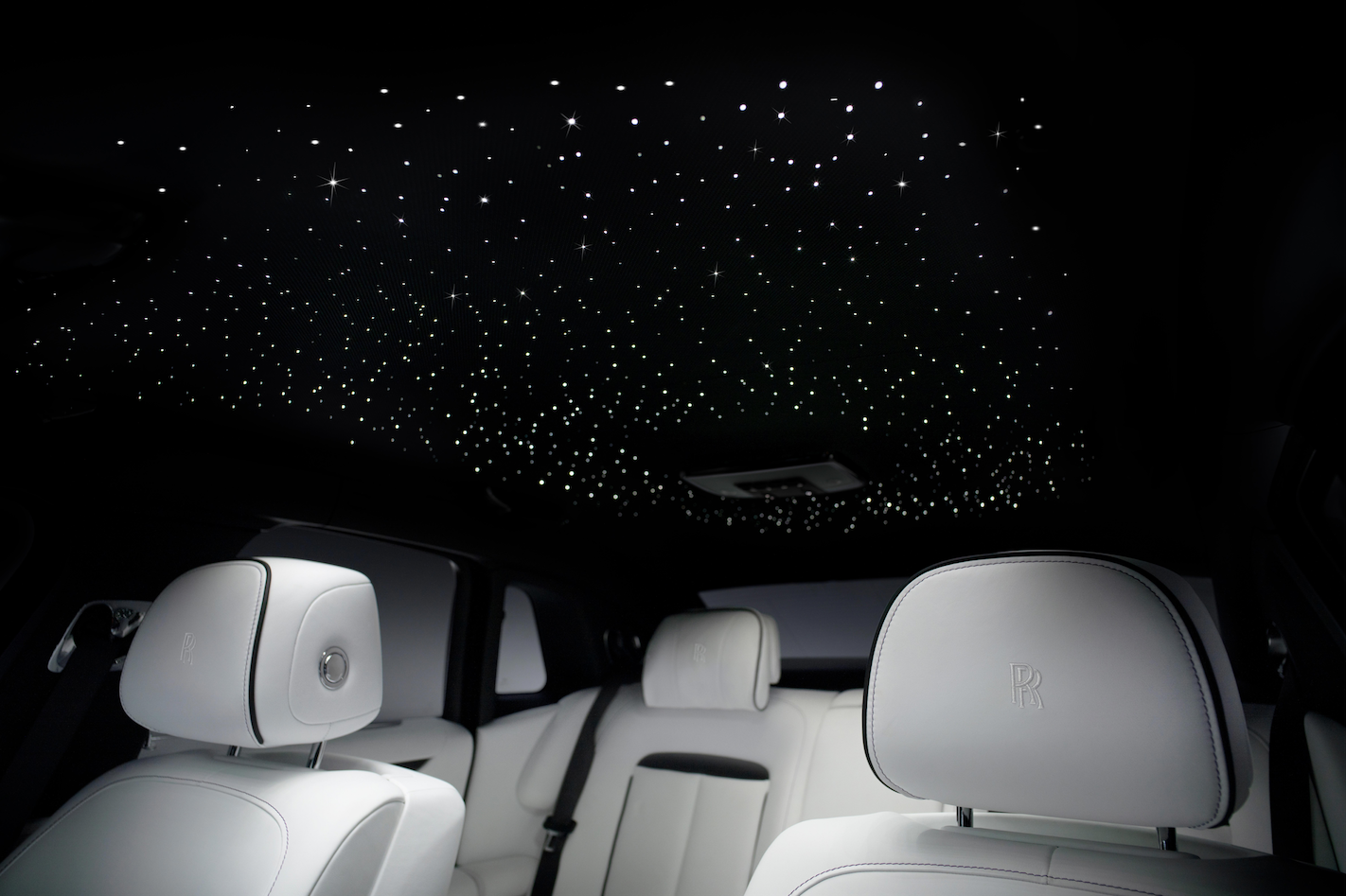 The super-strong aluminum chassis and 200 pounds of sound absorption materials go a long way toward making the Ghost live up to its name. Rolls went further, getting downright brutal to rid the car of unwanted noises. Consider this passage from the media kit:

“In the development of new Ghost, every component was interrogated to assess whether it created noises that engineers defined as unacceptable and were completely reengineered as a result.”

Can you just picture three lab coat-clad Rolls engineers in a darkened room, surrounding a hapless air conditioning duct sitting under a hot lamp and demanding to know why it was making an annoying humming noise? Sure, that sounds more like a Monty Python skit, but Rolls did say “interrogate” after all.  (“Nobody expects the decibel inquisition!”) 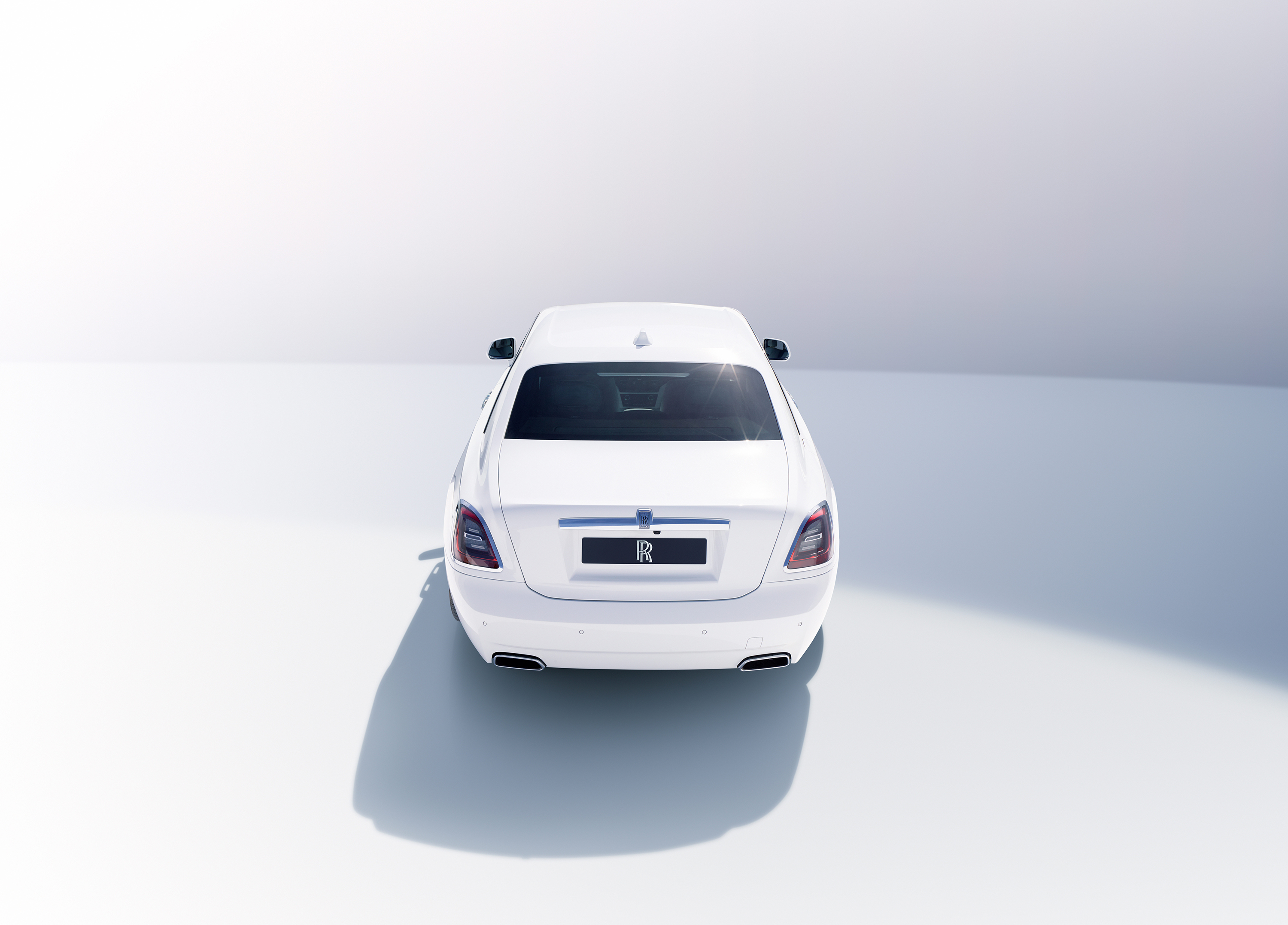 Your Own Personal Flagman

Rolls-Royce worked some extra magic on its Magic Carpet Ride air suspension for the new Ghost and added “Planar” software to control a new system called “Flagbearer.” This bit of tech combines cameras and GPS data to “read” the road ahead and proactively adjust the suspension in anticipation of a bump or dip. The Planar software also controls the ZF eight-speed automatic transmission, using Satellite Aided Transmission technology to pre-select the optimum gear for upcoming corners.

As for the Flagbearer name, Rolls reached back over 120 years to when British drivers had to employ a man to walk 60 yards ahead of a motorized vehicle to warn pedestrians. (Fun fact: the annual London to Brighton Run began as a celebration of the repeal of that law in 1896.) 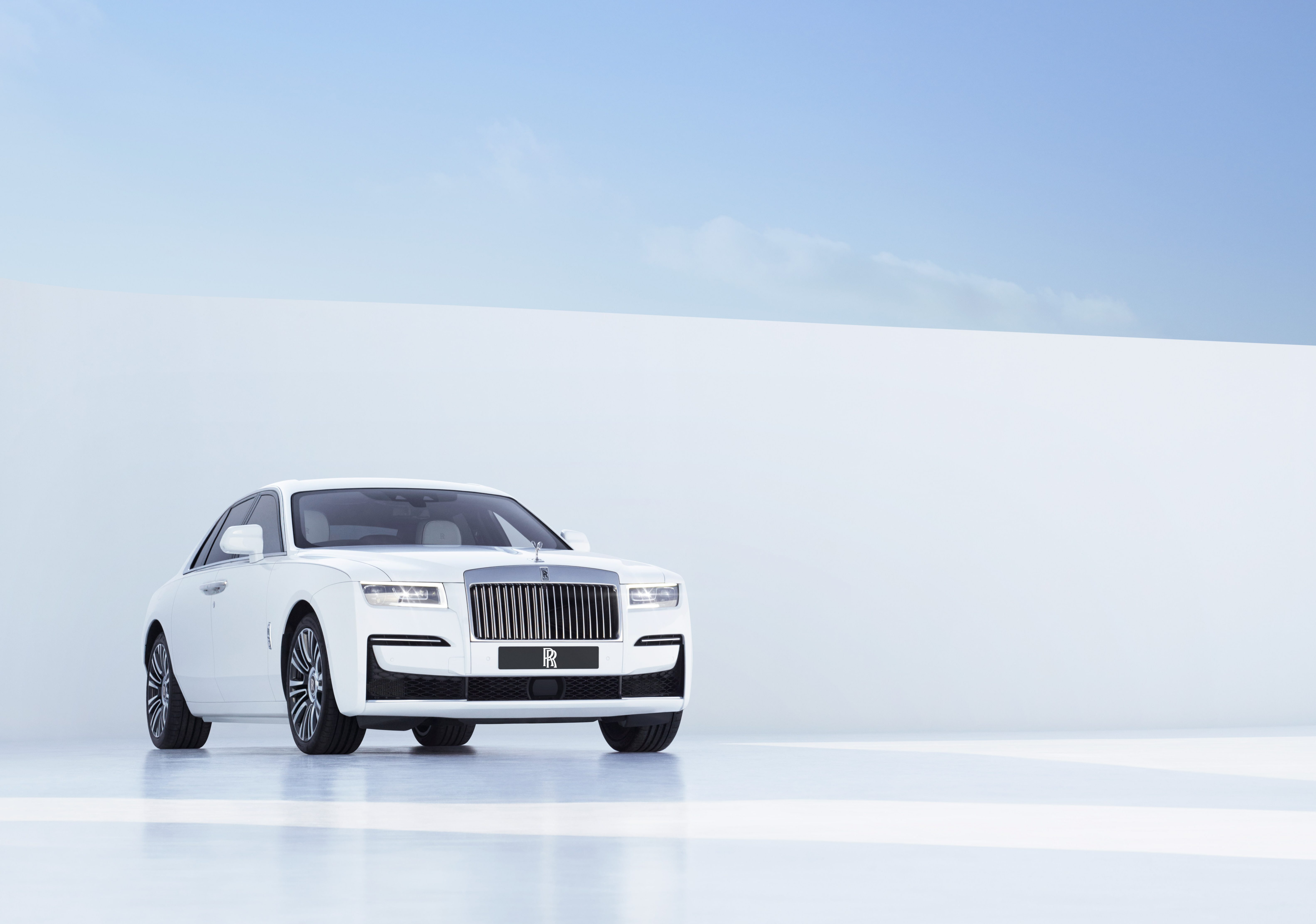 Rolls-Royce says the 2021 Ghost was designed around the idea of “Post Opulence,” defining that as “reduction and substance”. Specifically, Rolls designers shunned “superficial treatments such as busy stitching and other devices that create an illusion of luxury by dressing products lacking in substance in a premium skin.”

Translation: Rolls packed the new Ghost to the gunwales with every luxury imaginable but dressed everything in simple elegance. For example, instead of French stitching that everyone else is still using, you’ll find“incredibly long and perfectly straight lines” trimming the 338 individual leather pieces that cover the interior. Open-pore woods replaces the super-shiny stuff used in the previous model, and the Rolls models before that. 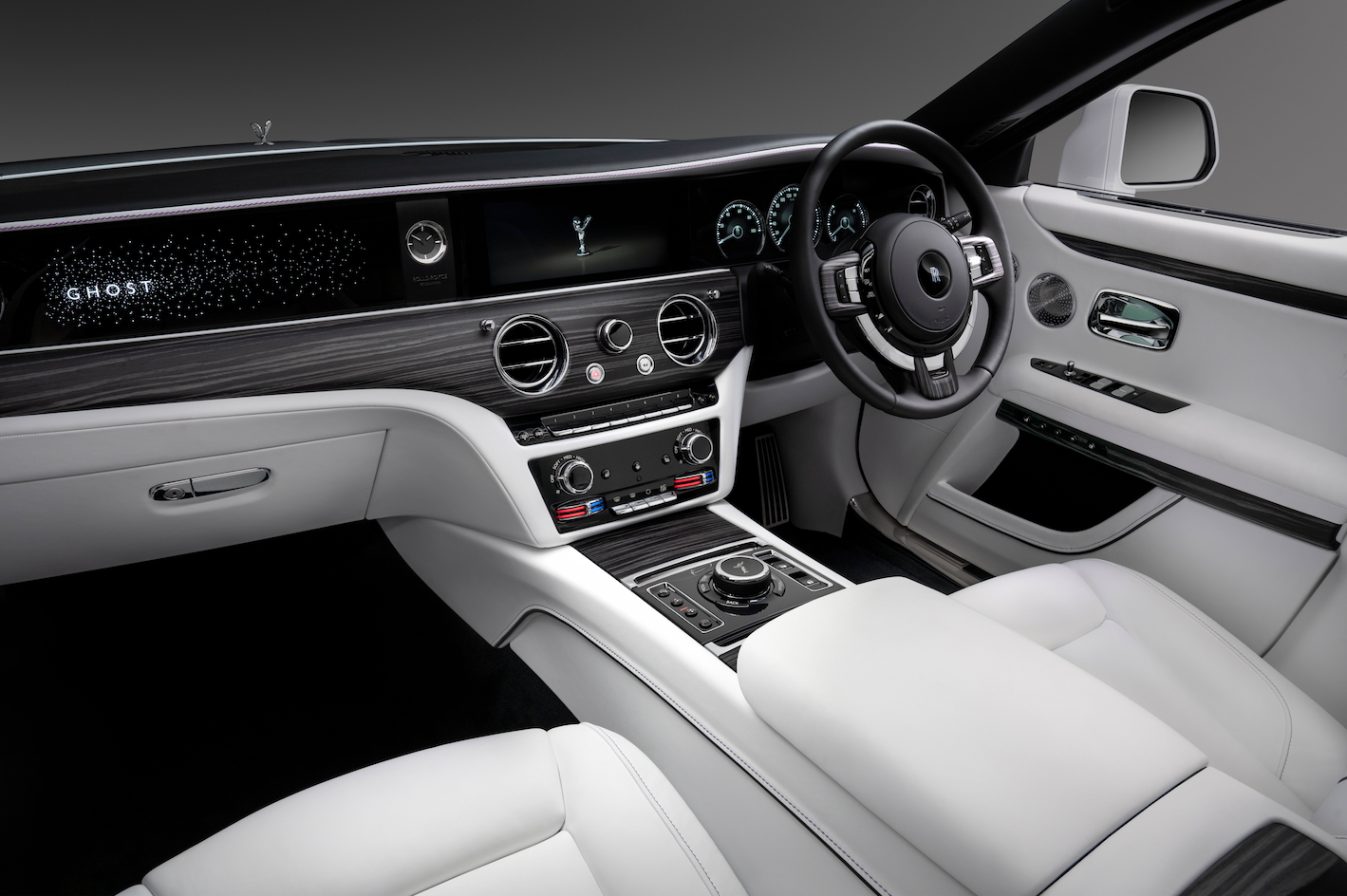 The Ghost’s dash layout looks refreshingly simple. However, at night, you can make it glow with LED “stars” like the marque’s renowned Starlight Headliner. Self-closing doors and dual-pane windows complete the cocoon theme. Meanwhile, a 1,300-watt Rolls-Royce Bespoke Audio System can break any awkward silence. (This might be the perfect song to sample in your own Ghost.)

Naturally, the latest driver-assist and collision mitigation technologies are all present in the 2021 Rolls-Royce Ghost. And, you and your passengers can breathe easier knowing that its Micro-Environment Purification System can remove nearly all ultra-fine particles from the cabin in under two minutes. 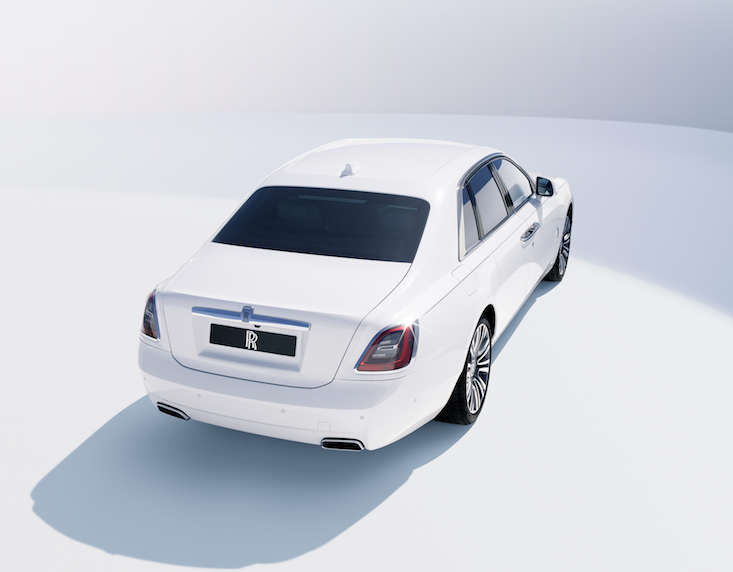