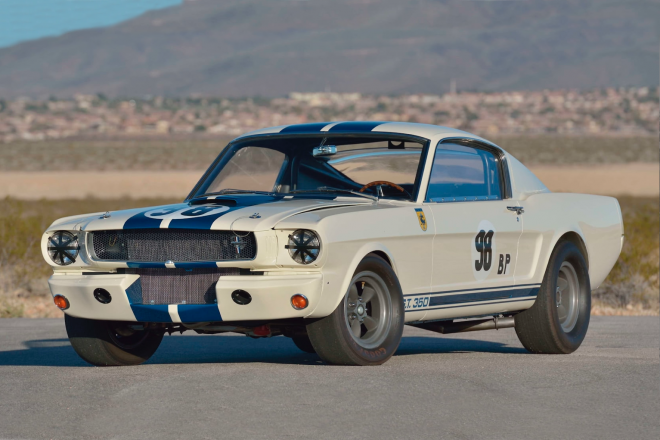 This past January, the car collector world gasped when the out-from-hiding “Bullitt” Mustang movie car sold for a staggering $3.75m at Mecum’s Kissimmee, FL auction. Just seven months later, another Mustang has shattered that record. The first 1965 Shelby GT350R, a star-studded racing steed with a trophy case of documented history, sold for $3.85m at Mecum’s Indy sale.

The $3.8m GT350R was one of 36 such cars built for the track. The led to accomplishing perhaps far more than Ford had envisioned when it recruited Carroll Shelby to its “Total Performance” roster. Other GT350R models are hardly cheap dates, with selling prices around the $1m mark in recent years. 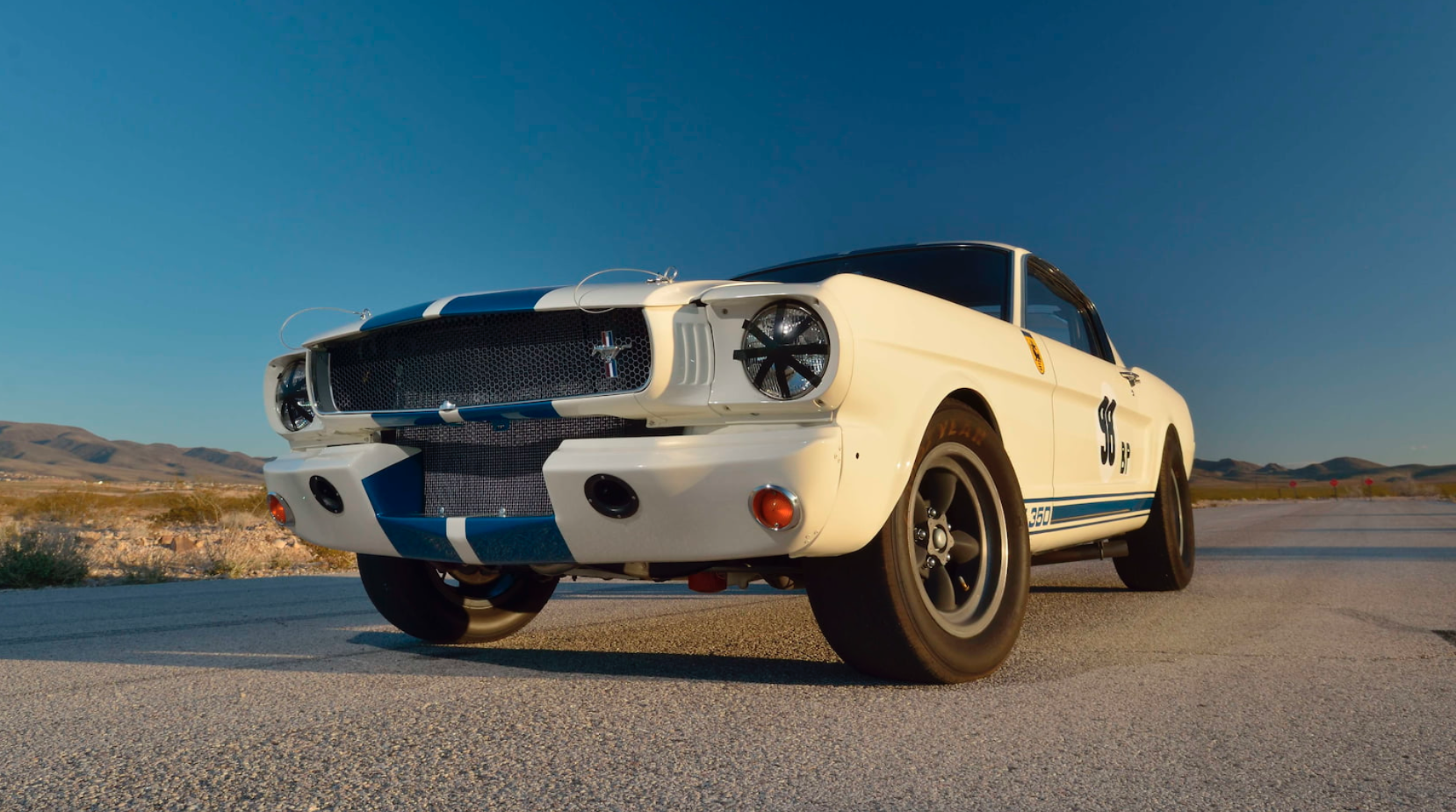 When retired racer Carroll Shelby approached Ford about supplying its new lightweight small-block V8 for his Cobra sports car in the early 1960s, timing was on his side. Ford had launched its “Total Performance” program to compete in all kinds of racing. Shelby, in turn, provided entry to international sports car and endurance racing.

Shelby was well known among car enthusiasts; his stellar driving career peaked with winning the 24 Hours of Le Mans for Aston Martin  in 1959 (with Roy Salvadori).

In April 1964, Ford ignited an industry storm with its first Mustang. The new “ponycar” came out of the gate a winner in the showroom and motorsports. Somewhat oddly, the Mustang’s first competition win came at a significant international event; 1-2 victory in the of the Tour de France Auto (Touring 3.0-Liter+ class) in fall 1964. The Mustangs beat the Jaguar Mk II sedans that had dominated the class since 1959. Most Americans probably had no clue.

Shelby had nothing to do with that effort, which was orchestrated by Alan Mann Racing, Ford’s European factory race team. Shelby was, however, shutting down competitors in SCCA sports car and FIA GT racing. Ford wanted to inject some of the Cobra’s venom into the Mustang. 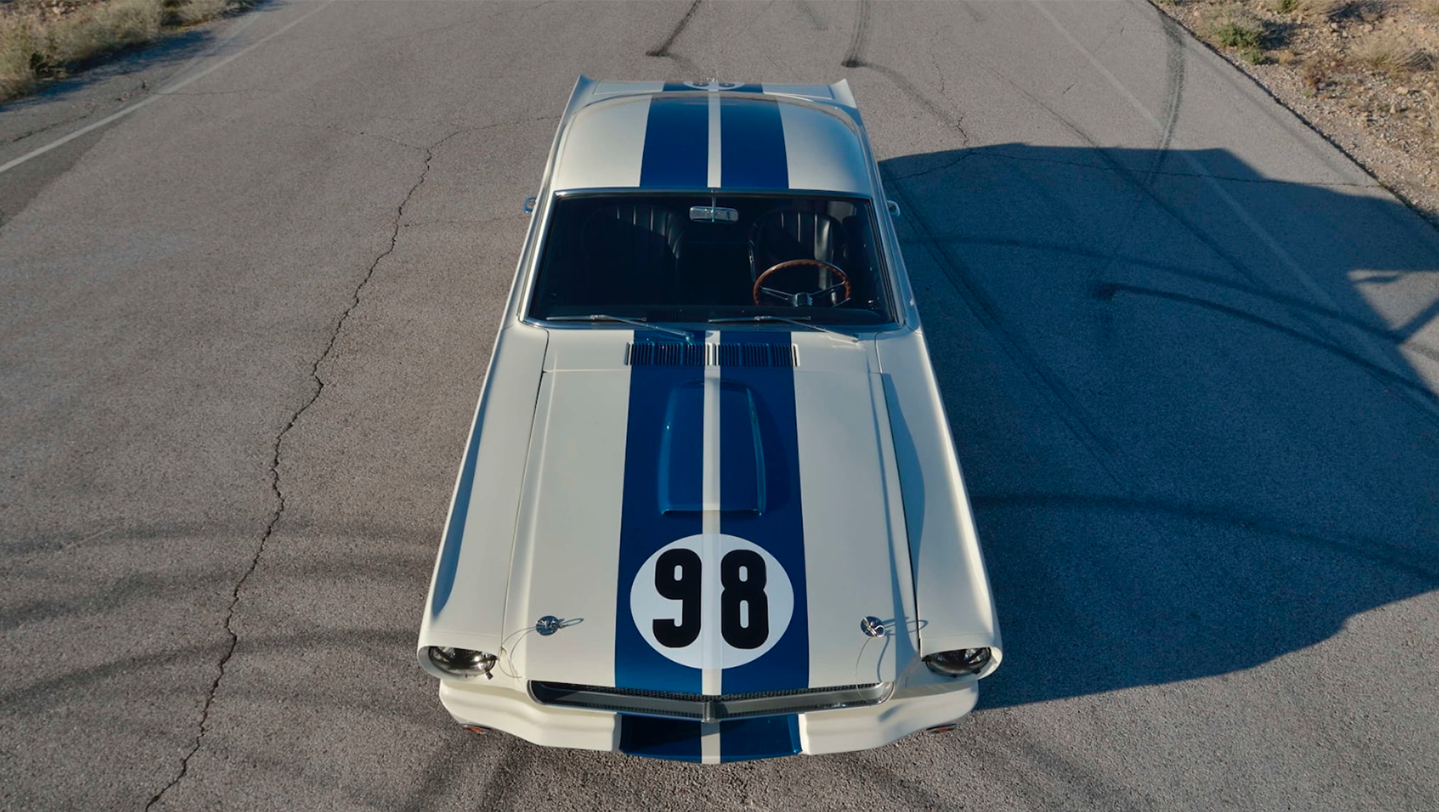 Despite the Mustang’s humble mechanical roots in Ford’s compact Falcon sedan, Shelby had no trouble extracting racing potential from the inexpensive car. He tweaked the Mustang’s optional high-revving 289 High-Performance V8. This boosted it from 271 horsepower to 306 hp with bolt-on parts that were also made available through Ford dealers.

Shelby stripped the Wimbledon White Mustang fastbacks shipped from Ford to the bare essentials. The back seat was deleted, the battery was moved to the trunk to improve weight balance, and exhaust pipes were routed under the doors. Shelby named the 2,900-pound sports machine “GT350,” the number having no particular connection to the car.

Chassis tweaks stiffened suspension, improved traction and quickened the steering but gave a jarring ride. The GT350 was a loud, rough, no-compromise machine. It was not for posers. The optional blue racing stripes were for show, but they would be earned quickly. Typical performance when new included 0-60 in about 6 seconds and a quarter-mile in under 15 seconds at over 90 mph. That was hot stuff for a sports car in 1965. 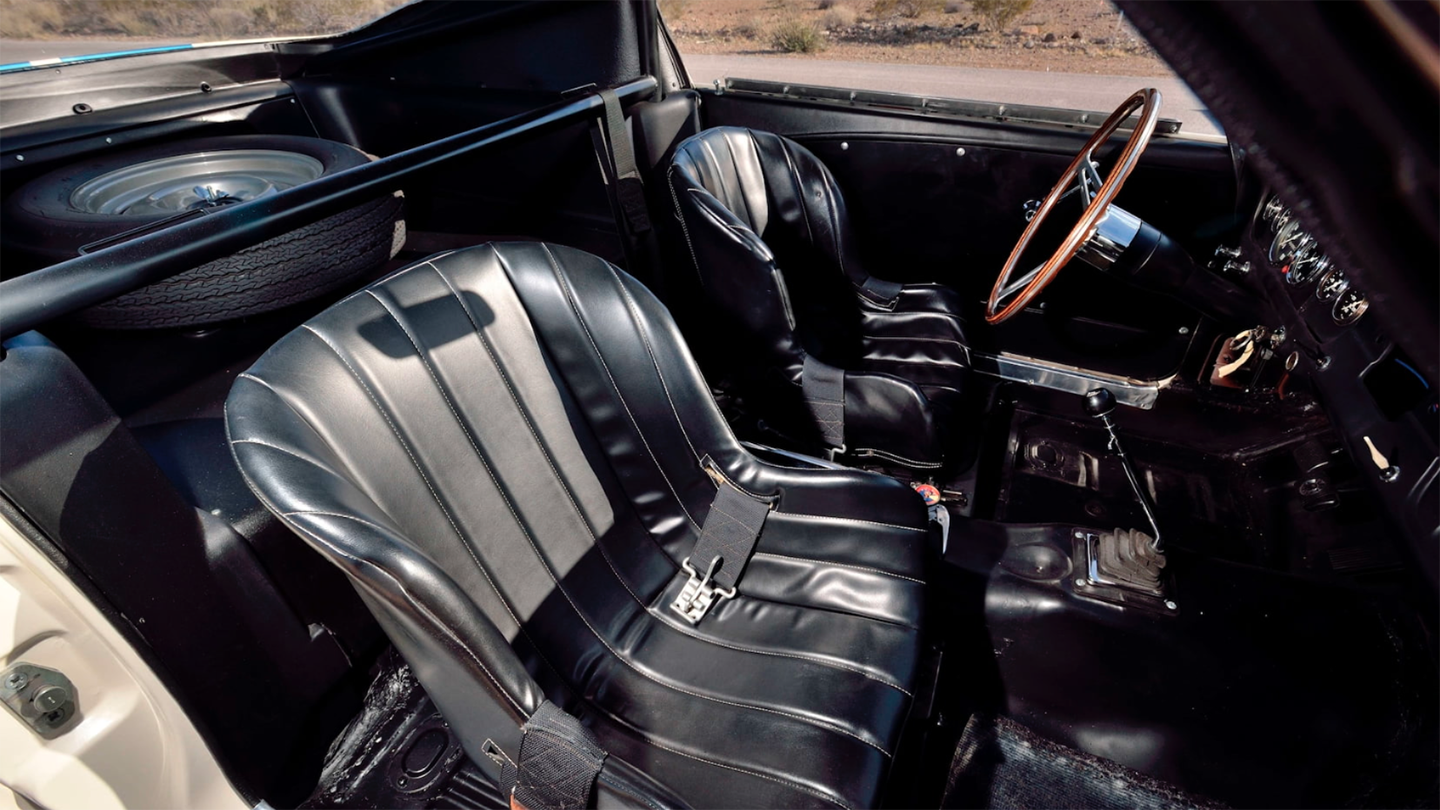 The GT350 blew away the motoring press. There was nothing else like it on the market. Said Car & Driver:

“It is, if nothing else, certainly the most sporting street machine we have driven in a long while, and anyone you tells you it isn’t a genuine sports car is nuts. The Mustang GT 350 may have a most unsophisticated suspension, but it goes around corners furiously fast, and has speed and brakes to match.”

The magazine issued a telling prediction: “The SCCA has blessed it for class B Production racing, and we would guess that it has every hope of dominating that class.” 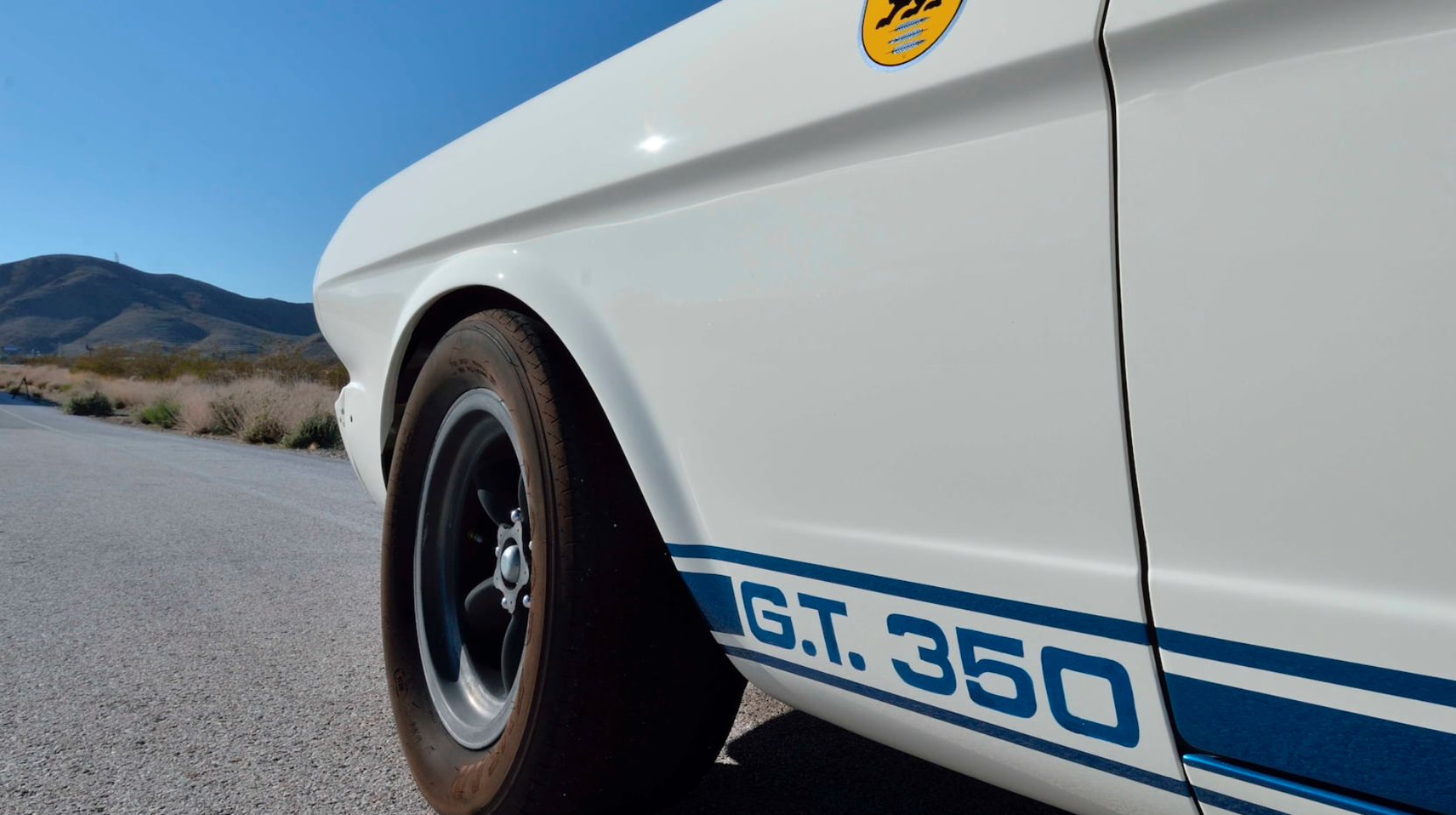 A GT350 cost $4,300 or about the same as a base Corvette with its very mild 250-hp engine. To qualify the GT350 for SCCA B-Production racing, Shelby also offered a race package for the GT350 that turned it into a GT350R. The $1,500 package added a “blueprinted” engine that was optimized to factory specs. He equipped it with a racing-spec camshaft and cold-air plenum intake for the carburetor. Plus, straight-through mufflers, an oil cooler, a heavy-duty radiator and more.

All told, it was an inexpensive way to get on the track in a new, ready-to-race and easy-to-maintain car. 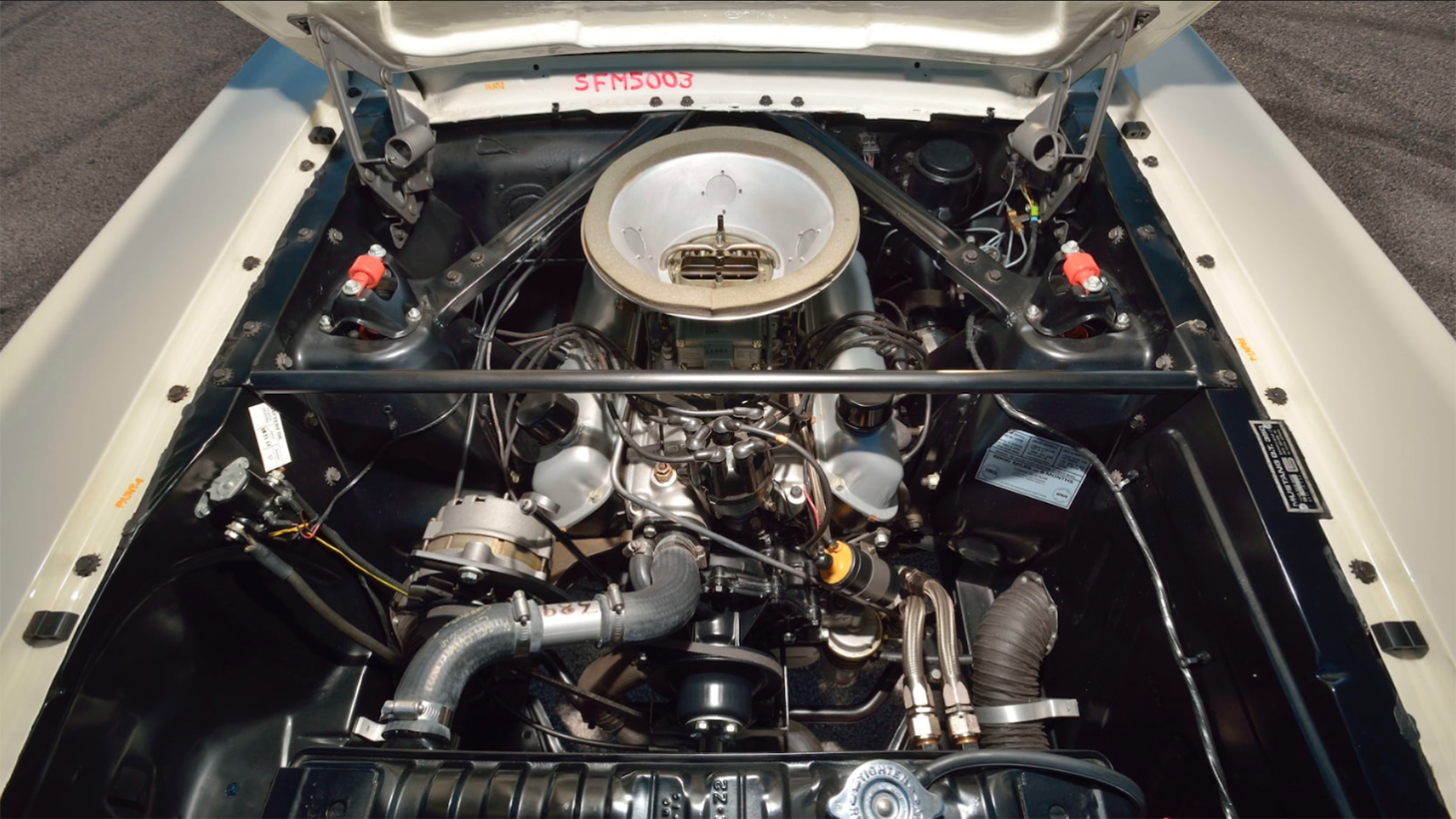 Ford used 5R002 at its GT350 media introduction in January 1965. Shelby development driver Ken Miles raced it for the first time on Valentine’s Day at Green Valley Raceway in Texas. From that event came the car’s first win and the iconic photo of 5R002 getting air cresting a rise in the track. The “Flying Mustang” image landed in just about every car enthusiast magazine, and Shelby used it in advertising.

Shelby sold this already-legendary GT350R for $4,000 in March 1966 to Bill Clawson, a Ford Performance Division engineer. It became a clandestine Ford factory racecar, as indicated in documentation Clawson kept and that remained with the car. During Clawson’s ownership, Ford slipped him a full racing-spec GT40 engine identified as a Ford “XE” (experimental) engine. This was included with the Mecum sale.

This Shelby GT350 and others helped Ford clinch the SCCA B-Production championship in 1966 and 1967. Shelby 5R002 went on to garner 18 SCCA Southwest Division B-Production wins through 1969 in the hands of owners Dale Wood and Russell Fish of Texas.

The next owner, Luis Blanq-Cacaux of Monterrey, Mexico, bought the car in 1970 for $3,500. He campaigned it successfully in the Mexican Trans-Am series for two years. The car then sat, parked and wearing a coat of gray primer. That is, until Mark Gillette of Dallas bought it in 1989. It went through more owners and was displayed at the Shelby American Museum in Boulder, CO for 14 years in “as found” condition. 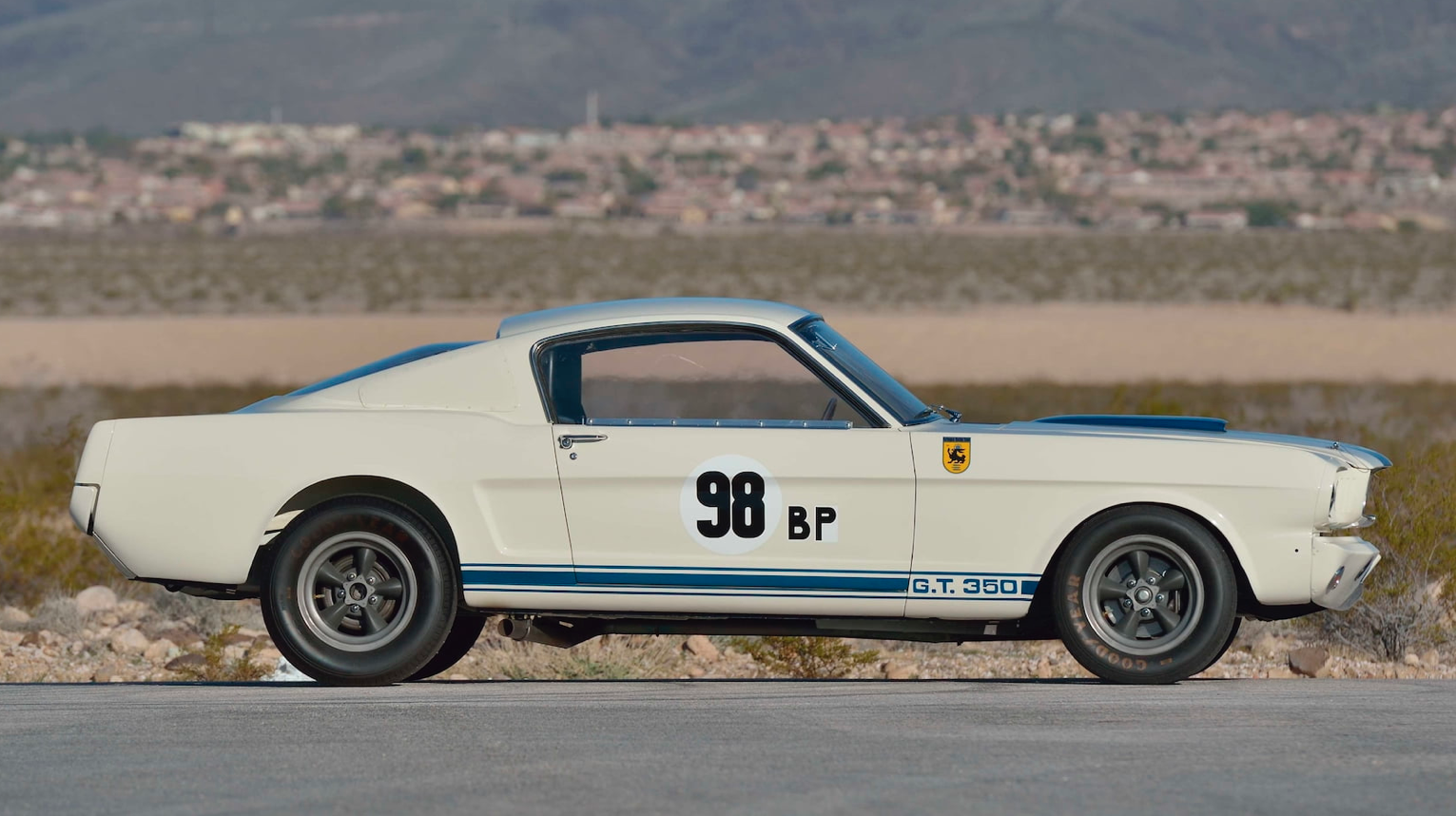 In 2010, Shelby collector John Atzbach bought 5R002 and showed it in “as is” condition at the Quail Motorsports Gathering before sending it for a painstaking four-year restoration by Thoroughbred Restorations in Oklahoma City, OK. It won Best in Class at the 2014 Amelia Island Concours d’ Elegance and the 2015 Pebble Beach Concours d’ Elegance.

“Of the important Mustangs that have come to auction, 5R002 in my opinion is the most significant in terms of its contribution to automotive history,” said automotive historian and author Colin Comer on Hagerty.com. 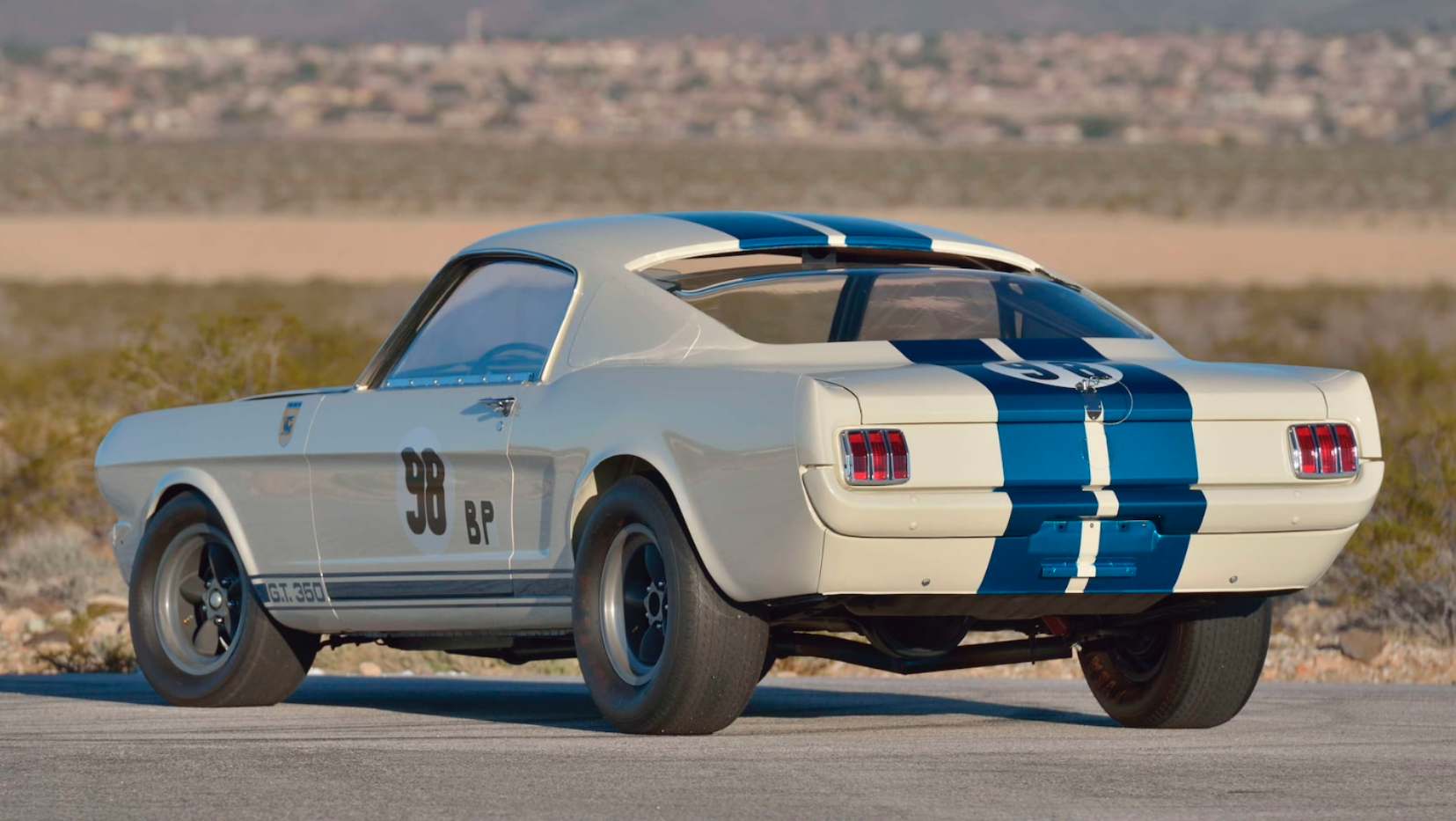