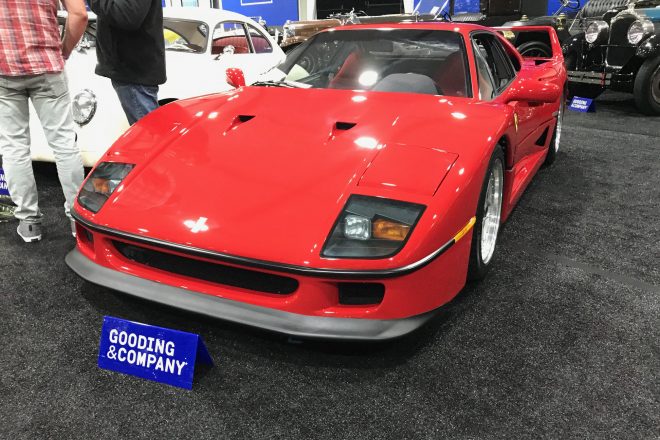 In the wake of the many new realities associated with the global pandemic, Gooding & Company has managed to weather the storm by focusing primarily on its strength in private-treaty sales of some of the finest motoring icons conceived. The Santa Monica based elite auction house has also developed its own online bidding platform and laid plans for Geared Online, its inaugural all-online auction, slated for August 3-7.

The Geared Online auction series will complement the auctioneer’s normal live auction events. It is driven by a new online platform for auctions. They will be held exclusively through the company’s website and mobile bidding app.  It present a wide selection of investment-grade collector cars – both at no reserve and with pre-sale reserves. Gooding & Company plans to house all vehicles included in the online auction within one geographic location, facilitating on-site inspections with sales specialists on behalf of sellers and bidders, delivering a seamless process.

As this article was written, 21 automotive lots were already posted on the Gooding & Company Geared Online sale website, up from 13 listings the previous day. Featured early consignments are headlined by a trio of Ferrari’s legendary modern supercars comprising a 1992 F40, 1995 F50, and 2003 Enzo. Further, a magnificently restored 1967 Jaguar E-Type Series I Roadster typifies the quality of consignments, which also include such modern classics as a 1990 Mercedes-Benz 190E 2.5-16 Evolution II, built to homologate the ultimate 190E and battle BMW in such high-profile racing series as the wildly popular DTM (German Touring Car Championship) and British Touring Car Championship (BTCC).

Our team of leasing and financing experts at Premier Financial Services will be watching this exciting auction closely, standing ready to help you finance the collector vehicle of your dreams. Here is a sampling of our favorite offerings from the growing roster of early feature consignments to Gooding & Company’s Geared Online auction catalogue. 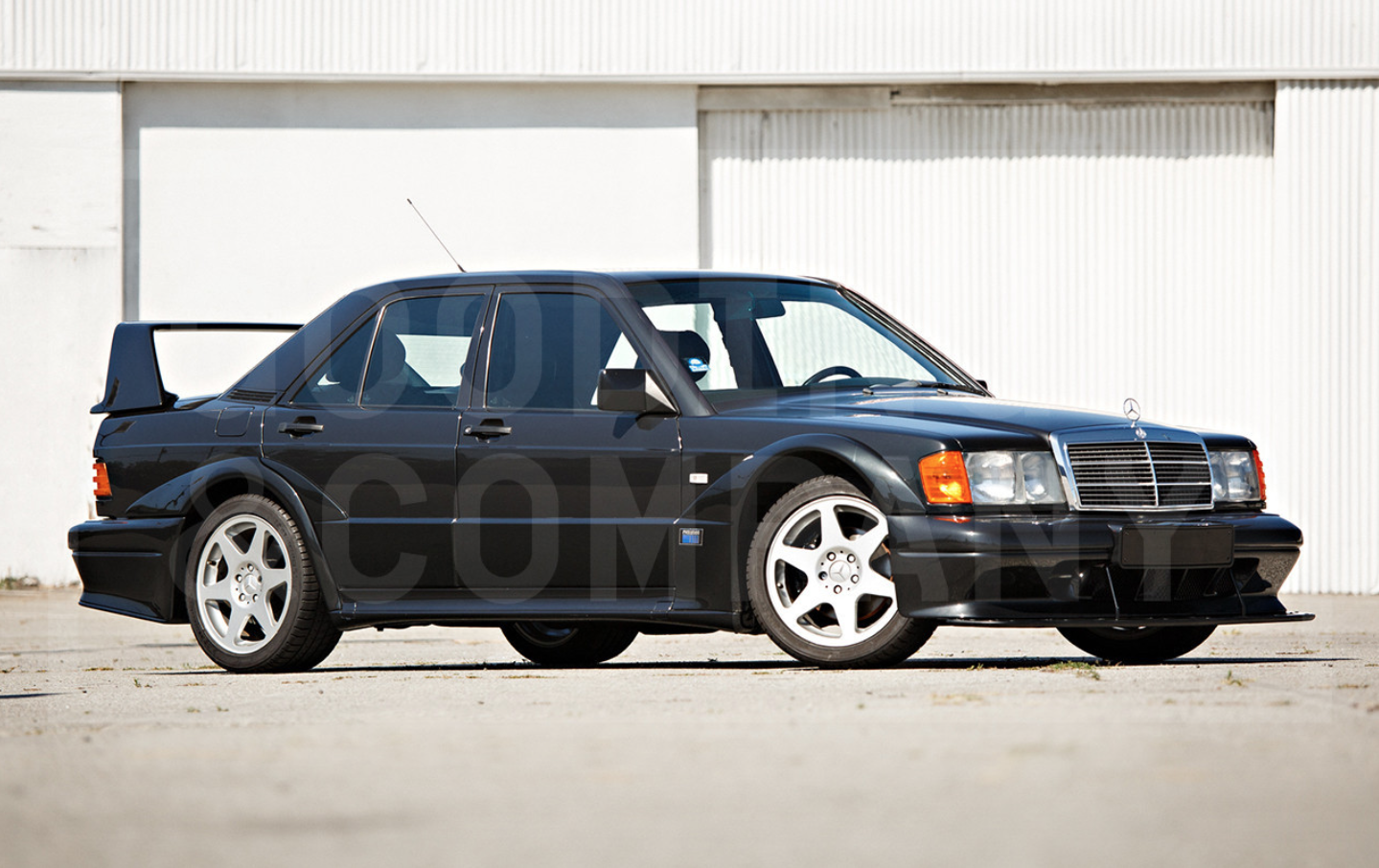 This aggressive 1990 Mercedes-Benz 190E 2.5-16 Evolution II is the pick selected by Ross Dressel, our Midwest Region Sales Manager. This sinister 1990 Mercedes-Benz 190E 2.5-16 is one of only 502 examples of the ultimate Evolution II variant produced to homologate the specification for the wildly popular DTM Deutsches Tourenwagen Meisterschaft (German Touring Car Championship). Moreover, the Evolution II was introduced at the 1990 Geneva Motor Show as the successor to the previous year’s Evolution. Just over 500 examples of each variant were built to meet DTM homologation rules.

EVO II models featured an enhanced body kit designed by aerodynamicist Dr. Richard Eppler. He added more-aggressive fender flares and a rear window spoiler. Plus, prominent adjustable rear spoiler to achieve a slippery reported drag coefficient (Cd) of just 0.29. The 2.5-liter Cosworth DOHC inline-four features a shorter stroke. Additionally, a wider bore than its counterpart in the standard 2.5-16 model for exceptional high-RPM response. Further development for the EVO II included an AMG PowerPack with upgraded camshafts, enlarged throttle body, and upgrades to the engine-management system, intake, and exhaust. Factory-rated power output was 232 HP at 7,200 RPM. Further, it was sent to the road through a Getrag 5-speed manual gearbox and limited-slip differential. It is certainly worthy of transport aboard Darth Vader’s starship.  Further, it would make a perfect addition to the garage of an astute collector. 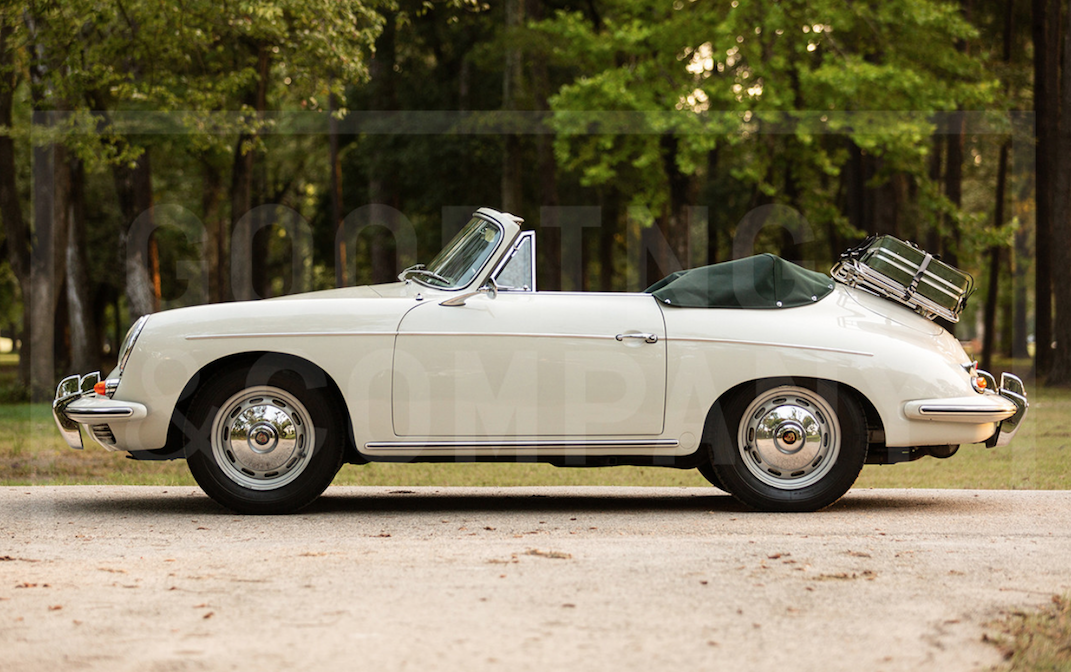 The pick of both Premier’s Northeast Sales Manager, Keith Neelans and our Southeast Sales Manager, Chris Warren, is this 1961 Porsche 356B Cabriolet. Offering uncommon refinement as a later development of Porsche’s 356 – the foundation for the company’s enduring success, the 356B featured the updated ‘T5’ body style, uncommon build quality, and uprated performance.

Car-specific details are still pending on the Gooding & Company website; however, this 356B had been previously listed for sale as retaining the matching engine, gearbox, and number-stamped body panels. In addition to date-coded original wheels (9/60) and a date-coded original fuel tank, the car was listed with copies of the Porsche Certificate of Authenticity and factory Kardex production record, plus documented ownership from new including correspondence from previous owners, an owner’s manual, tools, and more items. Please consult the vehicle description once posted on the Gooding & Company Geared Online sale website for the most recent details. 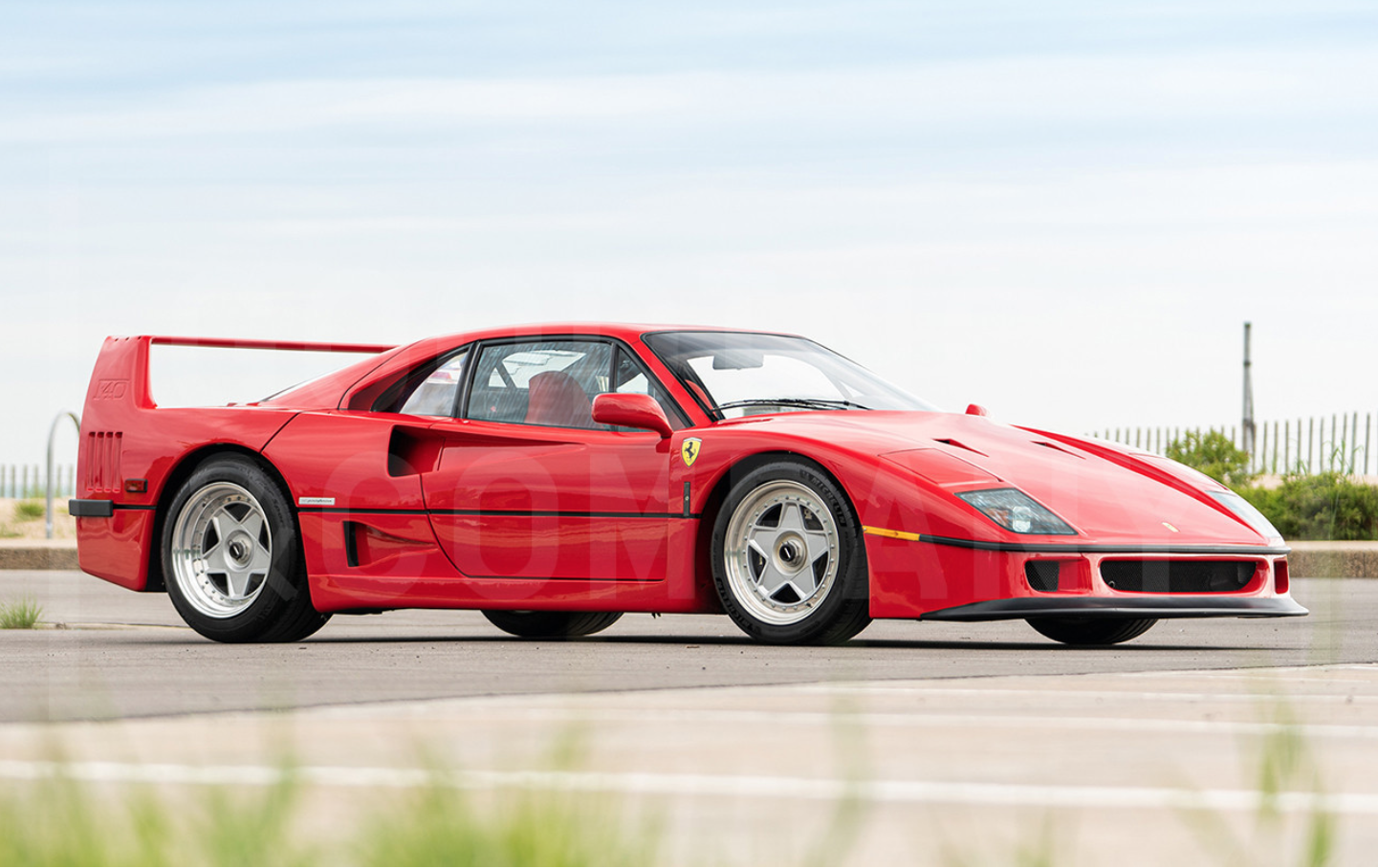 Juan Garcia, our West Coast Sales Manager, has picked this iconic 1992 Ferrari F40 from Gooding & Company’s Geared Online offerings. Firmly ranking high in many published “best car” lists, Ferrari’s F40 was the inspired by-product of a program initiated in 1984 to develop an improved 288 GTO to counter the rising threat from Porsche’s 959 in FIA Group B rally competition. However, the lethality of this escalating automotive arms race spurred Group B’s cancellation in 1986 before the high-tech gladiators from Maranello and Stuttgart could face each other for supremacy.

Debuted at Frankfurt in 1987, the new Ferrari was named ‘F40’ in celebration of Ferrari’s landmark 40thanniversary. The new Ferrari’s body was a tour de force by Pininfarina’s Leonardo Fioravanti blending aggressively functional lines with efficient aerodynamics yielding an ultra-low drag coefficient. A race-bred tubular spaceframe chassis mounted fully-independent underpinnings and ventilated disc brakes with four-piston calipers at each corner. As a result, Kevlar, carbon-fiber, and aluminum body panels minimized weight. The three elements also helped the 471 BHP twin-turbo V-8 engine propel the F40 to 200 mph. According to Gooding & Company’s preliminary sale listing, this 1992 Ferrari F40 is one of just 213 U.S.-specification examples built. In addition, now offered from original ownership, it is a highly desirable example of these legendary Ferrari supercars. Moreover, it is only an approximate 4,600 miles from new. 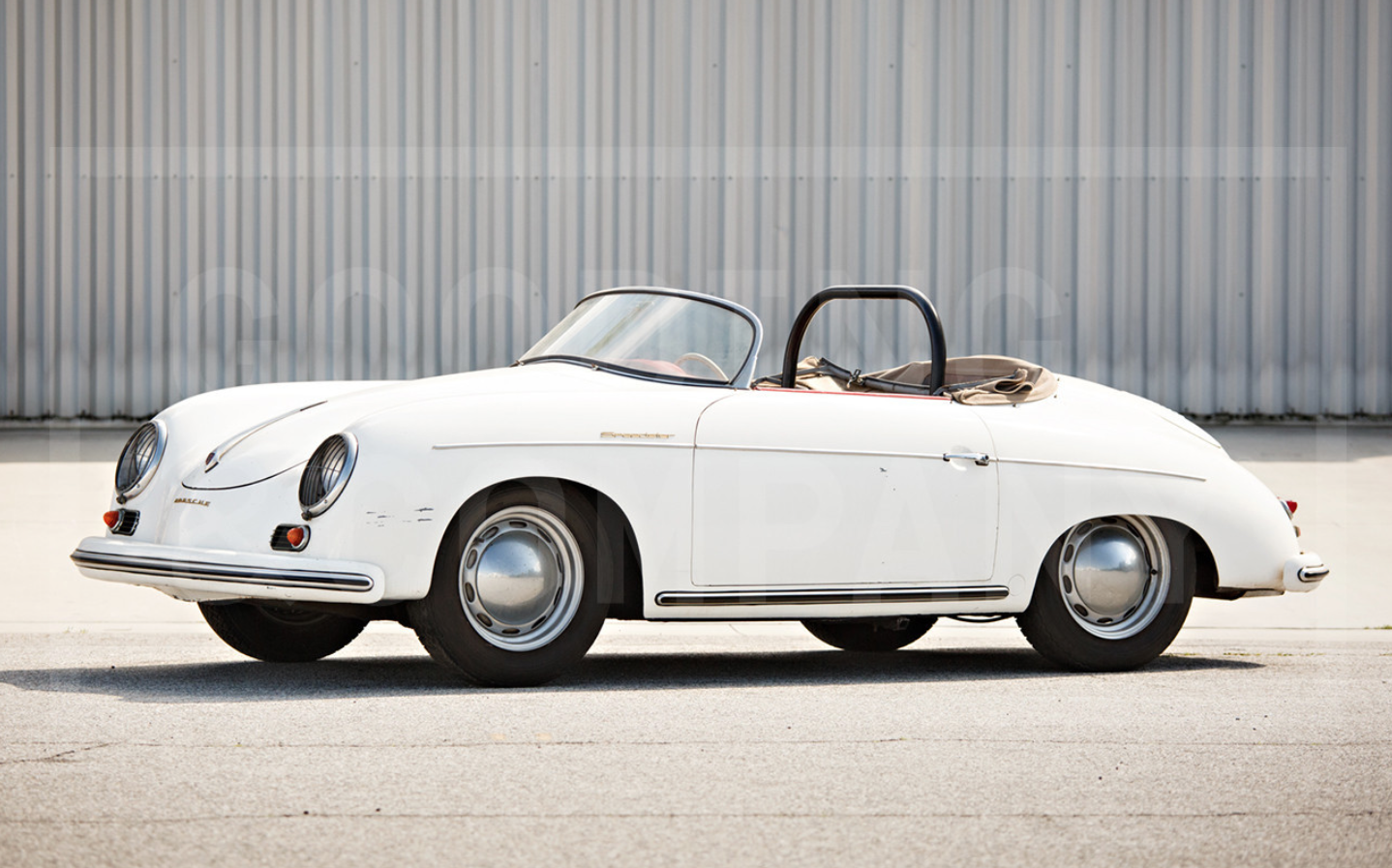 Michelle Yancey, Premier’s Southwest Sales Manager, has selected an early “Pre-A” 1955 Porsche 356 Speedster as her expert pick from the Gooding & Company Online auction offerings. Based on Porsche’s early 356 America roadster, development of 356 Speedster was spurred by Max Hoffman. He perceived sufficient demand less-costly, no-frills, Porsche convertible. Stuttgart’s Reutter Karosserie revised the America’s original bodywork. He designed the famous high-waisted body style, which eventually proved to be one of Porsche’s all-time most celebrated designs. Debuted in 1954, the Speedster brought the joys of Porsche ownership within reach of a wider audience. The car is equipped with a removable windscreen, simple bucket seats, and a cut-down windscreen. Further, it has a small top and side curtains for weather protection. The lightweight Speedster delivered noticeably sharper performance and handling, making it an ideal road/race car.

Quickly, the Speedster built a formidable reputation on American racetracks. This is thanks to its ability to out-handle and out-brake more powerful opponents. On the street, the Speedster’s rakish flair and ultra-modern attitude made it an instant hit with buyer. Further, it became an enduring classic that continues to captivate successive generations of Porsche enthusiasts today.

Previously listed by Gooding for private-treaty sale earlier in 2020, it is one of only 1,234 “Pre-A” 356 Speedsters produced. It was delivered new to legendary New York Porsche importer Max Hoffman and subsequent provenance picks up in 1965. At some point, its original engine was replaced by a considerably more powerful, late-production unit. Further, this engine was from a 356 SC yielding much better performance in the lightweight Speedster. The car is now being offered from 50 years of sole ownership. It marks a thrilling find for committed Porsche enthusiasts who like to drive.

A Simple Lease from Premier Financial Services takes the stress out of bidding on your dream car at auction. Premier is your path to enjoying any high-end automobile, from leasing a limited-production classic Porsche model from auction to driving that Ferrari, Lamborghini or McLaren Supercar home from the auction saleroom or dealer showroom. Be sure to prepare to bid with confidence with our auction basicsandcontact our team today to get started! 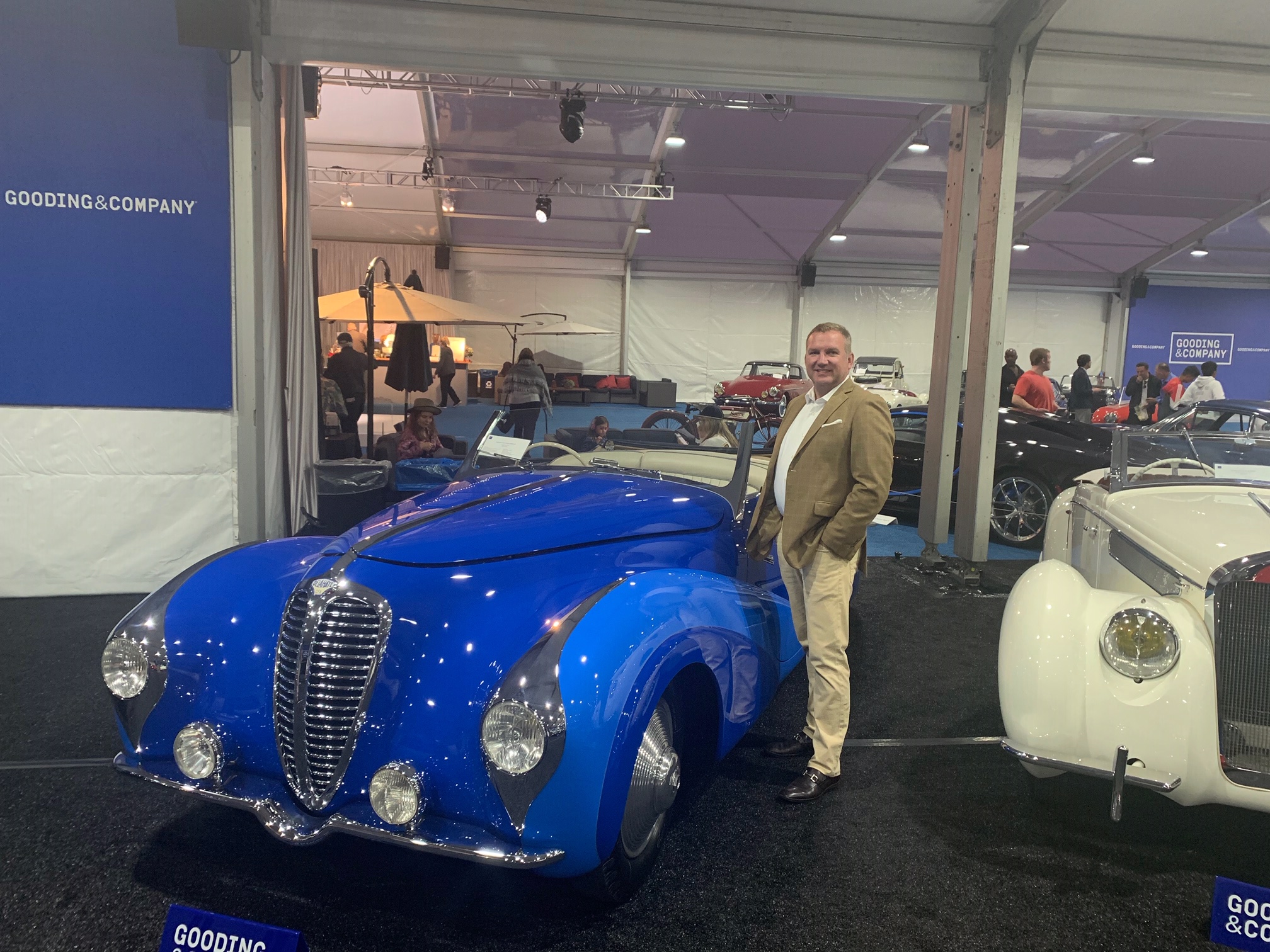