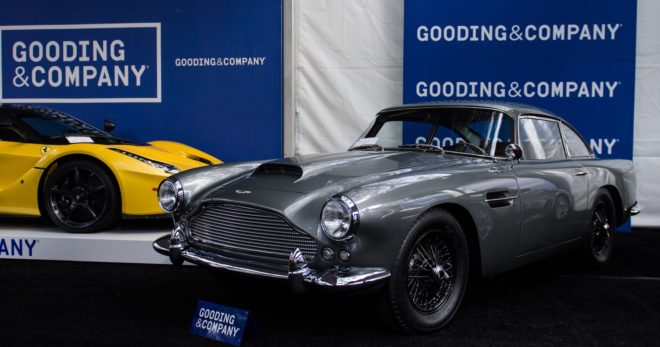 Gooding & Company’s annual Amelia Island sale is the premier east coast auction of the premier automobile auction house. The cream of the crop. Located beachside in the Omni Plantation Resort, Gooding’s docket will be shown and sold within earshot of the crashing waves. Like RM Sotheby’s auction, Gooding is celebrating Porsche‘s 70th with a tremendous selection of Stuttgart’s finest.

Our team of leasing and automotive experts will be watching the bidding at the Gooding & Company Amelia Island auction with a keen eye for shifts in the market. Here are a few of their favorite offerings.

Juan Garcia, Premier’s West Coast Sales Manager, has chosen the 2011 Porsche GT2 RS at Lot 13. The RS’s 3.6 liter turbocharged flat-six could break 200 mph on a straight and is mated to one Porsche’s last manual gearboxes. As one of only 142 shipped to the U.S., with less than 800 miles under its belt, this is perhaps the finest and fastest 997 extant.

Southwest Sales Manager Michelle Yancey is excited about the Lamborghini Diablo offered, without reserve, at Lot 17. The Diablo followed in the stylistic footsteps of the ostentatious Countach while making major improvements to performance. The VT designation stands for viscous traction, a four-wheel drive system that allowed power to the front if the back wheels lost grip. The result was a 500 HP supercar that maintained its rear-wheel drive character despite a large dose of livability.

Kyle Lane, our Sales Manager for the Midwest, loves the lines of Lot 26‘s Mercedes 300 SL Roadster. The 300 SL was miles ahead of the competition when it was introduced in 1954, a lead that was no shorter by 1958. Though it lost the iconic “gullwing” doors, the convertible topped the coupe with added power and handling while ameliorating the original‘s poor ventilation. This example was recently whipped back into fighting shape with engine tuning and replated brightwork.

The drophead Bentley Continental at Lot 20 has caught the eye of Southeast Sales Manager Chris Warren. The Bentley S2 Continental was a preeminent grand tourer; luxurious carpeting and a burlwood dash ensured the interior was a match for Park Ward’s stylish coachwork. A graceful aluminum V8 provided the power for high-speed travel. Options like power steering and a power-operated convertible top make this almost 60-year old coupe delightfully usable.

Premier’s Northeast Sales Manager, Keith Neelans, is a fan of the 1952 Jaguar XK120. The XK120 was Jaguar’s first post-war sports car and the foundation for the famed C-Type. This inline-six powered roadster was named for its top speed, which could exceed 120 mph and made it the fastest production car of its time. Fastidious maintenance and shrewd stewardship have allowed Lot 14‘s XK120 to age, unrestored, without forsaking its performance.

Premier’s corporate headquarters in Woodbury, Connecticut is watching the 1958 Mercedes 300 D. The Adenauer was advertised as “The Most Elegant Motorcar in the World,” and it’s not hard to see why: Classic, swooping fenders and a pillarless design compliment its proud grille. Self-leveling suspension kept the 300 D polite over even the rudest of surfaces. The example offered at Lot 45 benefits from advanced mechanical fuel-injection.

A Simple Lease from Premier Financial Services takes the stress out of bidding; we’ll worry about the logistics so you can get caught up in the excitement. Premier can help you with any high-end automobile, from leasing a little-known Bugatti to a universally-recognized 300 SL. But even with Premier in your corner, making the winning bid in Amelia can be difficult, so make sure to consult your auction basics before raising your paddle.